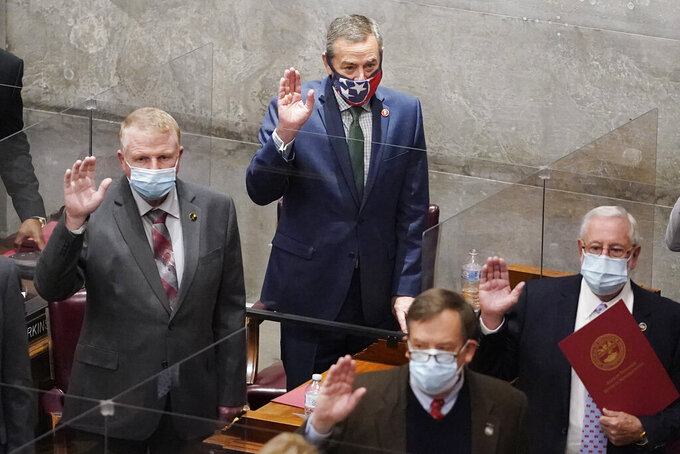 Rep. Glen Casada, R-Franklin, top center, is sworn in with other members on the first day of the legislative session Tuesday, Jan. 12, 2021, in Nashville, Tenn. Tennessee lawmakers gathered to start their annual session Tuesday in Nashville amid a pandemic and an FBI probe that drew searches of multiple legislative offices by federal agents last week. Those lawmakers include former House Speaker Casada, Rep. Todd Warner and Rep. Robin Smith. (AP Photo/Mark Humphrey)

NASHVILLE, Tenn. (AP) — Tennessee lawmakers gathered to start their annual session Tuesday in Nashville amid a pandemic and an FBI probe that drew searches of multiple legislative offices by federal agents last week.

Tennessee’s legislative session is likely to stretch for several months, with a special session called by Republican Gov. Bill Lee on tap starting Jan. 19 to address education challenges that have popped up amid the virus outbreak.

“We have seen dark clouds all across our country,” said House Speaker Cameron Sexton, who was unanimously voted as the top legislative leader for a second two-year term. "Tennessee must continue to be the example of how to work together in these challenging times. What will you do with your time?"

The Republican supermajority General Assembly is also likely to consider some proposals that were paused last year due to COVID-19, including a permitless handgun carry bill backed by Lee.

However, one of the first things on the Legislature's agenda is approving whether or not Tennessee should become the first to receive funding in a lump sum for its Medicaid program through a block grant. A vote on the plan is expected toward the end of the week, said Republican House Majority Leader William Lamberth.

The federal government approved the proposal earlier this month, but according to state law, the GOP-dominant Statehouse needs to sign off on the idea for it to take effect.

While Republican lawmakers are expected to easily advance the proposal, President-elect Joe Biden has previously said he opposed block-grant efforts and has the ability to rescind the change once in office. This has cast doubt on the measure actually be implemented though current Centers for Medicare and Medicaid Services administrator Seema Verma has said she believes the new administration should see the 10-year demonstration project through to the end.

In the House, the empty seat of Republican Rep. David Byrd was a stark reminder that Tennessee has seen some of the country's worst COVID-19 surges per capita in recent weeks. Byrd has endured a long hospitalization with COVID-19, including time on a ventilator.

The virus will heavily shape the legislative discussion. For one, lawmakers are suggesting ways to give themselves the power to limit or overturn emergency orders from future governors during health crises.

Meanwhile, more could also come to light in the federal investigation that spurred last week's searches of a handful of Republican House offices and the homes of a few lawmakers and at least one former staffer. Federal authorities have not revealed the reason for the probe yet.

An attorney for Warner, who just took office after winning the seat in 2020, said the Republican was “shocked” when federal agents showed up at his door.

“Federal agents descended on Rep. Warner’s home and business in Marshall County with search warrants, the contents of which remain shrouded in mystery by the government,” Peter Strianse, an attorney from Nashville, said in a statement.

“Rep. Warner can assure the citizens of his district that he has violated no laws and welcomes any investigation,” Strianse added.

Warner on Tuesday said he'd like to apologize to his family, saying “nobody’s family should have to go through something like that for just wanting to serve the citizens of my district and the state of Tennessee.”

Ben Rose, an attorney for Smith, said Friday the lawmaker “intends to cooperate fully with the investigation in all respects.”

“While she would have preferred to do so voluntarily, Robin understands this may not have been possible," Rose said in a statement. "Robin is not the target of the investigation, and she has not done anything wrong.”

Ahead of Tuesday's start to session, Smith told reporters she does not want “to do anything to jeopardize what’s going forward.”

“I’m here to do the job," Smith said. "But just know that right now I want to be very cooperative and very careful. I respect our justice system.”