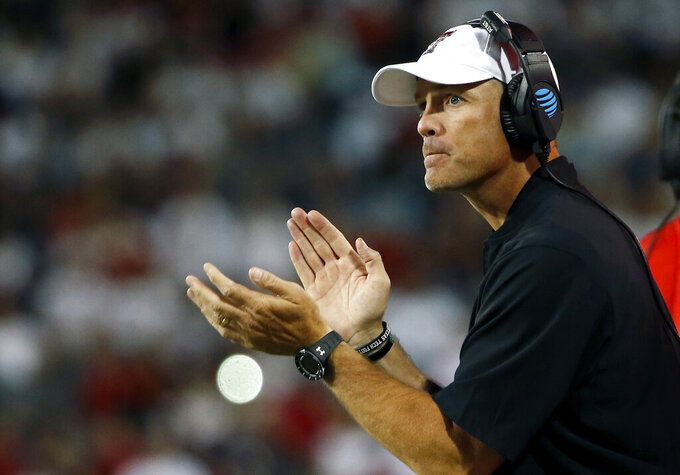 FILE - In this Sept. 14, 2019, file photo, Texas Tech coach Matt Wells applauds his team during the first half of an NCAA college football game against Arizona in Tucson, Ariz. Wells said at the start of this fall's camp that there was no question Alex Bowman was in line to take the first snap, and it was the sophomore quarterback's job “to solidify that role and extend his lead. It's up to him to play well.” (AP Photo/Ralph Freso, File)

LUBBOCK, Texas (AP) — Alan Bowman is ready for a fresh start as Texas Tech's quarterback. This time, he'd like to be playing at the end of a full season.

Bowman likely could have returned from a broken collarbone to play in Texas Tech's final two games last season. He opted instead to save a year of eligibility and turn his focus toward 2020.

“I was more comfortable, saying, ‘Hey, let’s take an offseason, let’s get bigger, faster, stronger. Let’s get another year in the offense,'" Bowman said this fall. “Let’s play a full season instead of coming back right towards the end of the season.”

While Big 12 teams are scheduled to play only 10 games in this unprecedented season because of the coronavirus, that would be more than Bowman played in either of his first two seasons. He has played in 11 games overall, starting 10 — only three of those under second-year head coach Matt Wells and offensive coordinator David Yost.

Wells said at the start of this fall's camp that there was no question about Bowman being in line to take the first snap. He said it was the sophomore quarterback's job “to solidify that role and extend his lead. It's up to him to play well.”

Bowman was a true freshman in 2018, the final season former Red Raiders quarterback Kliff Kingsbury was their head coach. Bowman was pressed into action in the opener against Ole Miss in an NFL stadium after an injury to starter Carter McLane, and completed 29 of 49 passes for 273 yards and a touchdown. Bowman's first start came a week later in a 77-0 win over Lamar, and the next week he completed 43 of 59 passes for 605 yards and five TDs, all career highs, against Houston.

Limited to eight games as a freshman when he twice dealt with a partially collapsed lung, Bowman still threw for 2,638 yards and 17 touchdowns. He was the nation's leading passer with 1,020 yards, six scores and 33.7 completions a game when he broke his collarbone in the Wells' third game last year at Arizona.

There were many Zoom meetings with Wells and Yost during the pandemic to talk about the offense, to understand it as much as possible and how to correct any mistakes he made.

“Light years ahead of where I was,” Bowman said. “The offense is obviously complicated, and there’s a lot of bits and pieces that go into it that you’ve got to learn by doing it. Kind of: trial by fire, trial by error.”

Former Arizona linebacker Colin Schooler will be eligible to play immediately this fall after leaving the Pac-12 team for which he started the past three seasons. The Pac-12 opted against playing this fall. Schooler, a graduate transfer, had 318 tackles in 37 games at Arizona and his 46 tackles for loss are the most among active FBS players. Schooler is the latest of seven impact transfers the Red Raiders have added, six of them previously enrolled at Power Five schools. Defensive end Tyree Wilson also joined the Red Raiders this fall after playing 12 games as a redshirt freshman at Texas A&M last season. The 6-foot-6, 280-pound end is seeking an NCAA waiver in hopes of also being able to play this season.

Texas Tech had as many as two dozen active positive COVID-19 cases in its athletic program as recently as this week, including 21 involved with the football team. The Red Raiders at one point were practicing without at least 20 players who had tested positive, plus an unspecified number of additional players being isolated because of contact with those affected by the novel coronavirus. Wells also said two players opted out of the season, though he didn’t publicly identify them.

When the Pac-12 and SWAC decided to not play this fall, Texas Tech lost scheduled home games against Arizona and Alabama State. The Red Raiders were supposed to open the season at UTEP, but that game got canceled after the Big 12 went to a plus-one fromat, allowing schools to play only one non-conference game at home before getting into round-robin league play. Texas Tech will open at home Sept. 12 against Houston Baptist, which will be in its second game even though the Southland Conference isn’t playing league games this fall.