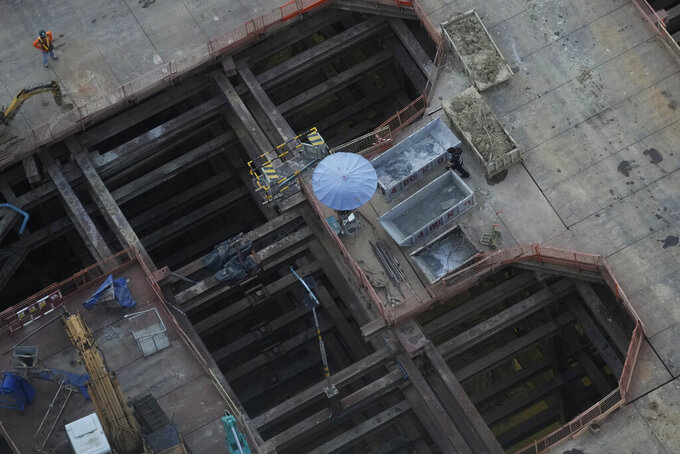 A lone worker stands on a construction site at dusk in Bangkok, Thailand, Friday, June 25, 2021. As Thailand has struggled unsuccessfully to lower the number of new COVID-19 cases and related deaths during its third and worst wave of coronavirus infections, the government on Friday ordered the camps where construction workers are housed in Bangkok and other hard-hit areas to be shut for a month and the workers kept inside to help stop the spread of the disease. (AP Photo/Sakchai Lalit)

BANGKOK (AP) — As Thailand struggles to slow its worst wave of coronavirus infections, Prime Minister Prayuth Chan-ocha announced Friday a one-month lockdown of camps where construction workers are housed in Bangkok and nine other areas.

The situation has become critical as the number of hospital beds in Bangkok for seriously ill COVID-19 patients runs short despite the creation of several field hospitals. Prayuth said a proposal for a seven-day curfew for all of Bangkok has been rejected for the time being.

More details of new measures will be released over the weekend, the prime minister said, acknowledging that “people will have less convenience during this period.”

Construction workers will be isolated in camps in Bangkok and five neighboring provinces, and in the country’s four southernmost provinces, all virus hotspots. Prayuth said the Labor Ministry will provide living expenses for the workers, both Thais and foreign migrants.

She said it was a bad sign that 25 of the clusters have been active for more than 28 days.

Additional measures under consideration include closing off high-risk areas, isolating areas with people considered high-risk such as migrant workers, and limiting dangerous activities, she said.

The government is also mobilizing military medical staff and recent medical graduates from other provinces to assist in the Bangkok area. The military already has helped set up field hospitals.

Health authorities on Friday announced 3,644 new cases, bringing the confirmed total to 236,291, including 1,819 deaths, since the pandemic started. The most recent wave of infections which started in early April accounts for about 88% of the total cases and 95% of the deaths.

Officials said public hospitals in Bangkok currently have only 23 acute-care beds available for COVID-19 patients in serious condition, while private hospitals have 108.

Bangkok’s public Chulalongkorn Hospital suspended COVID-19 testing for four days starting Thursday because it has no beds for COVID-19 patients, said Thiravat Hemachudha, a medical professor at Chulalongkorn University. Health regulations decree that patients who test positive for the virus must be admitted.

Thailand has administered around 8.66 million vaccine doses, with around 9% of its 69 million people receiving at least one shot. Critics charge that Prayuth’s government failed to secure timely and adequate vaccine supplies. He says Thailand now has agreements that will ensure enough vaccine for about 70% of its population by the end of the year.

Authorities, meanwhile, are planning to go ahead with a plan to allow fully vaccinated foreign tourists to visit the southern resort island of Phuket without undergoing a 14-day quarantine that is otherwise mandatory. Thailand is anxious to begin the recovery of its lucrative tourism industry, which has been devastated by the pandemic and consequent travel restrictions.