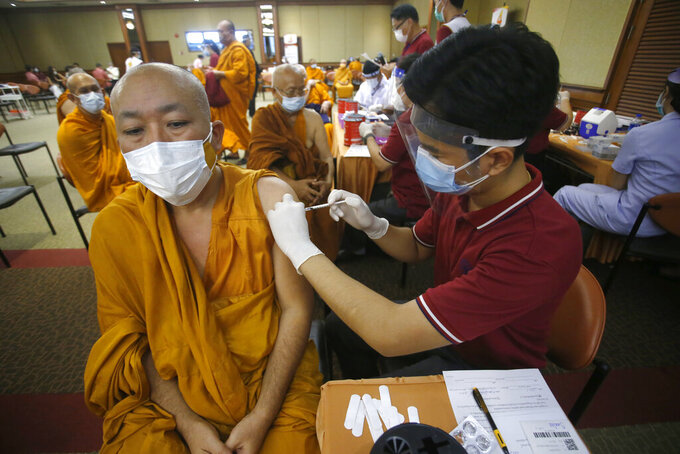 FILE - In this May 18, 2021, file photo, a health worker administers a dose of the Sinovac COVID-19 vaccine to Buddhist monk at Priest Hospital in Bangkok, Thailand. Thailand on Friday said it had detected its first locally transmitted cases of the coronavirus variant first found in India, even as it announced the formal rollout of its national vaccination plan from next month. (AP Photo/Anuthep Cheysakron,File)

BANGKOK, Thailand (AP) — Thailand on Friday said it has detected its first locally transmitted cases of the coronavirus variant discovered in India, as it announced the formal rollout of its national vaccination plan next month.

The Ministry of Public Health said 36 cases of the Indian variant were found in a camp for construction workers in Bangkok. Of those, 21 are Thai, 10 are from Myanmar and five from Cambodia, said Dr. Supakit Sirilak, chief of the Medical Sciences Department.

The government has banned the arrival of any non-Thais from India, Pakistan, Bangladesh and Nepal in an effort to prevent the spread of the variant.

Thailand reported 3,481 new coronavirus cases and 32 more deaths on Friday. Its total number of confirmed cases has now grown to 123,066 since the outbreak started, including 94,203 reported since a surge broke out at the beginning of April. It has reported 735 deaths, including 641 since April.

The Center for COVID-19 Situation Administration said a nationwide state of emergency will be extended to the end of July to help contain the virus.

The government also announced it will begin its national vaccination campaign on June 7, and that foreign residents will be allowed to sign up. The government had for weeks see-sawed on whether foreigners would be included and had said they would be vaccinated last.

Thailand hopes to vaccinate 70% of the estimated 70 million people living in the country by the end of the year.

Natapanu Nopakun, deputy spokesman for the Ministry of Foreign Affairs, said foreign migrant workers, who number more than 1 million, would be vaccinated separately by the labor ministry.

Thailand has already started vaccinating some of the 150,000 Chinese citizens living in the country. China has supplied Thailand with millions of vaccine doses.

About 200,000 other foreigners — from Australia, Japan, Europe, the United States and elsewhere — are mostly professionals and retirees.

Thailand largely contained coronavirus cases last year by closing its borders, enforcing mandatory quarantines and actively tracing contacts of those found to be infected. The measures devastated its lucrative tourism industry but kept the pandemic at bay, for the most part, until early April.

Then a surge that began in high-end nightspots in central Bangkok spread rapidly as people were allowed to travel during a mid-April national holiday.

A partial lockdown in recent weeks has made limited headway in containing outbreaks, especially in Bangkok and in prisons.

Camps for construction workers have recently become another major cluster. There are 409 construction camps across Bangkok housing 62,169 people. Of that number, 26,134 are Thai and 36,035 are migrant workers.

About 87% of the cases detected recently in Thailand are from the coronavirus variant first found in Britain, Supakit said.