Thais killed by rocket in Israel part of large workforce 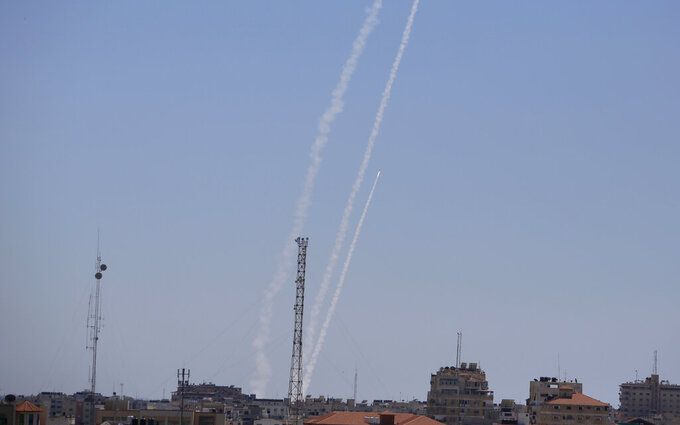 FILE - In this Tuesday, May 18, 2021. filer, rockets are launched from the Gaza Strip to Israel. The deaths of two Thai migrant farm workers in Israel in a rocket attack from Gaza cast fresh light on the difficult lives thousands of their countrymen face far from their homes. It is not unusual for Thais from their country’s economically disadvantaged rural areas to seek work abroad at wages considerably better than they could earn at home. (AP Photo/Hatem Moussa, File)

BANGKOK (AP) — The deaths of two Thai migrant workers in Israel in a rocket attack from Gaza cast fresh light on the difficult lives thousands of Thais face far from home.

It is not unusual for Thais from economically disadvantaged rural areas to seek work abroad at wages considerably higher than they could earn at home, in more developed countries where there is a shortage of workers for unskilled manual labor such as agricultural work.

But the hazards of war come on top of a history of poor treatment by employers and failure to enforce labor laws, according to workers' advocates.

Israel started bringing in migrant workers after the first Intifada, the 1987-93 Palestinian revolt, in order “to replace Palestinian workers that employers did not trust anymore,” said Miriam Anati, coordinator for agricultural workers at Kav LaOved, an Israeli private group that seeks to protect the rights of disadvantaged workers.

Many Palestinians have since returned to work in Israel, so there are usually about 23,000 Thai migrant workers employed in Israel’s agriculture sector alongside about 15,000 Palestinians, she said.

The two workers killed Tuesday were typical of the 18,728 officially registered as of April with Thailand’s Labor Ministry as working in Israel, which hosts the second largest numbers of overseas Thai workers after Taiwan.

“Weerawat had a wife and 21-year-old and 12-year-old daughters. And he also provided for his elderly parents. He went to Israel in 2018 and worked hard, sending money home every month,” said Amphan Aggatut, head of the Thai labor office in Phetchabun province, who visited his family Wednesday.

“We talked about what we needed to do, many things. His mom isn’t too well. And his father is getting old and bedridden,” she recalled, sobbing as she spoke. “There are so many things we planned to do.”

Ladda Upahin, a Thai labor official, said Sikarin’s widow, Orathai Gongmareung, said her husband had arrived in Israel only last month and had been working for just a few days after completing a coronavirus quarantine. She said the couple, the parents of two toddlers, had been on the phone when Tuesday’s attack occurred.

“He had been calling her during his break. She said he was telling her there was an attack but he didn’t hear any warning,” said Ladda. “After that she was contacted by someone else who told her that her husband was sent to the hospital.”

They are not the first Thais to be caught in the crossfire between Israel and Palestinians. Thai workers were killed by rocket or mortar fire in 2014, 2010 and 2004.

In May 2019, another Thai migrant worker suffered injuries from a rocket that landed in the same village where Tuesday’s tragedy occurred.

Even when war isn't raging, life has been hard for the Thai workers.

A 2015 report by the New York-based group Human Rights Watch said they often were housed in makeshift and inadequate accommodations and “were paid salaries significantly below the legal minimum wage, forced to work long hours in excess of the legal maximum, subjected to unsafe working conditions, and denied their right to change employers.”

“Unfortunately, and in spite of the commitment it contains, the agreement has not affected the rights violations many Thai workers suffer once they are in Israel,” she said.

“Thai migrant workers in Israel suffer numerous rights violations when it comes to their wages, social rights, safety at work and accommodations requirements. This situation is possible because Israeli authorities do not intervene, and let employers do as they wish.”