Thierry Henry notes positive changes in his return to MLS 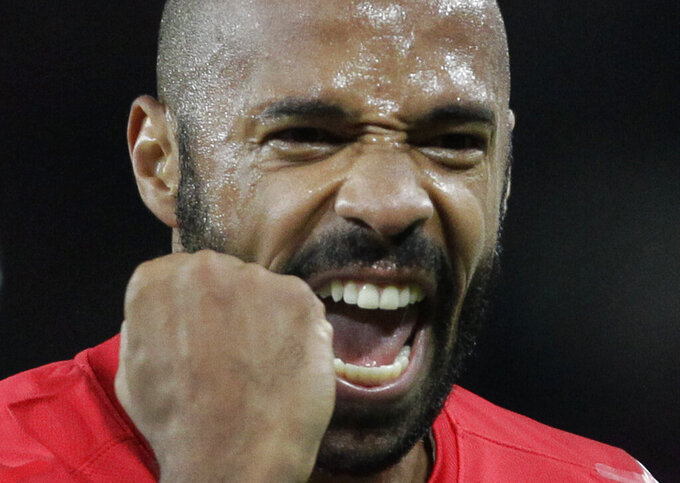 FILE - In this Jan. 9, 2012, file photo, Arsenal's Thierry Henry celebrates after scoring the winning goal against Leeds United during an English FA Cup soccer match in London. There's been a shift in Major League Soccer since Thierry Henry was a player. Back then, Henry said, MLS was still targeting players from Europe at the end of their careers. Like him. But now the league is drawing promising young talent from Mexico and South America _ signalling a progression from the old `retirement league' reputation that MLS once had. (AP Photo/Matt Dunham, File)

There's been a shift in Major League Soccer in the relatively short time since Thierry Henry was a player.

The former Arsenal star, now the new coach of the Montreal Impact, played for the New York Red Bulls from 2010 to 2014.

Back then, Henry said, MLS was still targeting players from Europe at the end of their careers. Like him.

But now the league is drawing promising young talent from Mexico and South America — signalling a progression from the old `retirement league' reputation MLS once had. The average age of players is skewing younger than a decade ago.

“That’s a sign that the league is evolving,” Henry said.

Henry noted that MLS is retaining young talent, like LAFC’s Carlos Vela, who in the past may have gone to Europe.

“I don’t know how far the league can go. It’s up to us obviously, now I’m back in, to make sure that we can elevate the league as much as we can," he said. “This league has no limits for me, but you need time to reach that level.”

MLS was celebrating its 25th season, and Henry was embarking on his first as coach of the Impact, when play was suspended on March 12 because of the coronavirus outbreak.

On Friday, however, the league took its first step toward restarting the season by announcing it was allowing voluntary individual workouts for players at team outdoor practice fields starting next Wednesday.

Montreal had started well, with a win in Henry's debut as coach over the New England Revolution, and a draw on the road against FC Dallas, before the league was shuttered.

Henry, who signed a two-year contract with the Impact last November, is now navigating the uncertainties of coaching amid a pandemic.

“Well, what’s difficult is not being on the field, as I mentioned before. You cannot beat that. You need to be on the field in order to have a feeling, to have intensity," he said. "And when you succeed at what you wanted to do or planned to do for a game or a training session, the players are buying it a bit more because they can feel it a bit better."

It is Henry's second stint as a head coach: He had a difficult three-month tenure coaching Monaco, the club he played for as a youth. Before that, he coached the forwards for Belgium, which reached the 2018 World Cup semifinals.

As a player, Henry is France’s all-time top scorer and a winner of the 1998 World Cup and 2000 European Championship. He retired from international play in 2010 with 51 goals in 123 appearances.

With Arsenal, Henry held the record for most goals for a foreign player in the English Premier League (175) until Manchester City striker Sergio Aguero passed him in January. Henry remains Arsenal's all-time leading scorer with 228 goals across all competitions during his time there from 1999-2007.

Henry also played for Barcelona before signing with the Red Bulls, where he scored 51 goals before retiring in 2014 and becoming a TV soccer commentator.

Henry is hopeful he'll get to restart the latest chapter of his career soon.

“I always mention Jurgen Klopp. It took him three and a half years to do what he’s doing with Liverpool. It doesn’t happen just like that,” Henry said. “So we were kind of getting somewhere. It was early stages — let’s not get carried away. Guys were starting to understand what we wanted and how we wanted to play and the intensity and the togetherness and the fight that we wanted to put into games.”