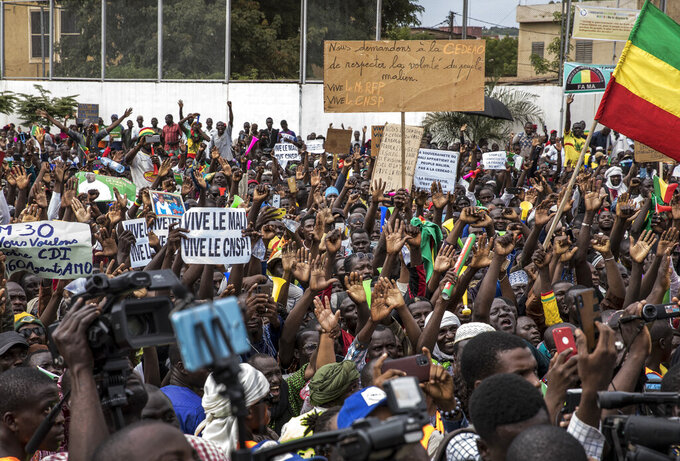 Malians supporting the recent overthrow of President Ibrahim Boubacar Keita gather to celebrate in the capital Bamako, Mali Friday, Aug. 21, 2020. Hundreds marched in the streets of Mali's capital Friday to celebrate the overthrow of Keita, as the West African country's longtime political opposition backed the military's junta plan to eventually hand over power to a civilian transitional government. Placards in French read "Long live Mali, Long live the CNSP", the french acronym for the junta calling themselves the National Committee for the Salvation of the People, and "We ask ECOWAS to respect the will of the Malian people". (AP Photo)

BAMAKO, Mali (AP) — Thousands marched Friday in the streets of Mali's capital to celebrate the overthrow of President Ibrahim Boubacar Keita, as the West African nation's political opposition backed the military’s junta plan to eventually hand over power to a civilian transitional government.

But as opponents of the former regime moved ahead with plans for the future, the international community continued to express alarm about the coup that deposed Mali’s democratically elected leader this week. There are concerns that the political upheaval will divert attention away from the more than seven-year international fight against Islamic extremists who have used previous power vacuums in Mali to expand their terrain.

Soldiers from the junta calling itself the National Committee for the Salvation of the People made a brief appearance Friday at Bamako's Independence Square, where they thanked the crowd of thousands for their support.

“We have come to complete your work. This is your struggle,” Col. Major Ismaël Wagué told the demonstrators, before introducing two more officials in the junta's leadership — a first vice president and a third vice president.

Keita — first elected in a 2013 landslide the year after a similar military coup — saw his popularity plummet after his 2018 re-election as the Malian army faced punishing losses from jihadist attacks. Then after dozens of legislative elections were disputed this spring, demonstrators began taking to the streets calling for his resignation. He offered concessions and regional mediators intervened, but his opponents who formed a coalition known as M5-RFP made clear they would accept nothing short of his departure.

On Friday, they welcomed the week’s developments but insisted they remained “deeply attached to democracy.” The junta has promised it will return the country to civilian rule but has given no time frame for doing so. Mali was not due to have another election until 2023.

Military juntas across West Africa have not always been in a rush to hand over power even when promising to do so — after the country's March 2012 coup, the first democratic election was not held until the following August.

The regional bloc known as ECOWAS signaled it would send another delegation to Bamako soon and called for the mobilization of a regional standby military force, and indication it was preparing contingency plans in case negotiations again failed.

ECOWAS leaders have suspended Mali’s membership, closed its borders with the country and said that financial sanctions would be imposed against the junta leaders.

Wagué, the junta spokesman, insisted Keita had resigned of his own free will despite soldiers having detained him after surrounding his private residence and firing shots into the air. The 75-year-old ousted leader remained in military custody Friday along with the prime minister.

U.N. human rights officials have met with Keita and other officials being held by the junta, according to Guillaume Ngefa, the Mali representative for the U.N. High Commission on Human Rights. He gave no further details on the meeting but confirmed that Mali’s finance minister has been released.

A distressed Keita, wearing a mask amid the COVID-19 pandemic, resigned on national broadcaster ORTM on Tuesday just before midnight and three years before his final term was to end.

“If today, it pleases certain elements of the military to decide this should end with their intervention … I must submit to it," he said. "I wish no blood to be shed to keep me in power.”

The United Nations and France have been urging a return to constitutional order in Mali, amid fears that Islamic extremists could once again gain ground. The United Nations spends $1.2 billion annually on the peacekeeping mission in Mali, which has 16,500 peacekeepers.

French Defense Minister Florence Parly said counter-terrorism operations have continued despite this week’s coup and France is working with European and regional allies “to find a solution to this grave crisis.”

“It is important that we continue our combat against terrorism in the region” for the security of the Sahel and of Europe, she said Friday in Paris.

French and U.N. soldiers patrolled the streets in Mali’s northern city of Gao on Friday, where there was worry of more chaos.

Mali's 2012 coup created a power vacuum that allowed jihadists to seize control of key northern cities until a French-led military operation pushed the rebels out of the urban centers the following year.

But since being pushed out of the northern cities, the jihadists have regrouped in rural areas and launched relentless attacks on the Malian military, as well as the U.N., French and regional forces in the country. The extremists have moved south, inflaming tensions between ethnic groups in central Mali.

Wagué, the junta spokesman, said the new military rulers were doing everything possible to be sure that jihadists did not gain ground.

Col. Assimi Goita, Mali’s new strongman, had been head of a special military unit based in central Mali. He also had taken part in the annual Flintlock training organized by the U.S. military to help Mali and other Sahel countries better fight extremists.

While Mali’s Islamic insurgency started before Keita took office, many felt his government did not do enough to end the violence.

Associated Press writers Carley Petesch and Krista Larson in Dakar, Senegal, and Angela Charlton in Paris contributed to this report.