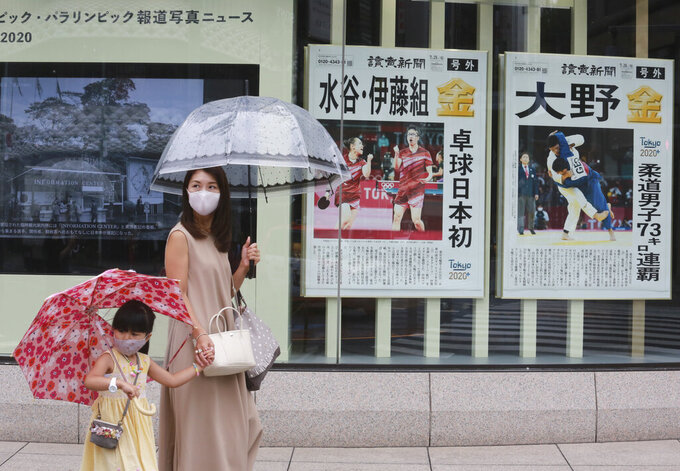 TOKYO (AP) — Japan's capital, Tokyo, reported its highest number of new coronavirus infections on Tuesday, days after the Olympics began. Prime Minister Yoshihide Suga urged people to avoid non-essential outings, but said there was no need to consider a suspension of the Games.

Tokyo is under its fourth coronavirus state of emergency, which is to continue through the Olympics until just before the Paralympics start in late August.

Experts have warned that the more contagious delta variant could cause a surge during the Olympics, which started Friday.

Asked if he is considering an option of suspending the Games, Suga replied, “There is no worry about that," adding that people have been moving about less since the Games started because of traffic controls and the government's request that they work remotely.

Suga’s government has been criticized for what some say is prioritizing the Olympics over the nation’s health. His public support ratings have fallen to around 30% in recent media surveys, and there is little festivity surrounding the Games.

Health Minister Norihisa Tamura, asked about the jump in cases, said it was not a surprise. “Taking into consideration the global acceleration of infections because of the delta strain, which is taking over earlier variants, it was quite possible,” he said.

Tamura blamed bars and restaurants that are still serving alcohol despite a ban under the state of emergency as a possible cause, instead of the Olympics.

The continuing upsurge despite two weeks of emergency measures, which focus on shortened hours for eateries and an alcohol ban, mean they are ineffective, said Kazuhiro Tateda, a Toho University infectious diseases expert who is on a government panel. With the Olympics and summer holidays prompting the movement of people, infections could escalate in coming weeks, Tateda told NHK public television.

Experts noted that cases among younger, unvaccinated people are rising sharply as Japan’s inoculation drive loses steam due to supply uncertainty. Many serious cases involve those in their 50s. They now dominate Tokyo’s nearly 3,000 hospitalized patients and are gradually filling up available beds. Authorities reportedly plan to ask medical institutions to increase their capacity to about 6,000 beds for COVID-19 patients.

Tokyo Gov. Yuriko Koike said elderly people are now more than 60% fully vaccinated and account for just 2% of new cases. “It is crucial to promptly vaccinate younger people,” she said.

Japan’s vaccination drive began late and slowly, but picked up dramatically in May for several weeks as the supply of imported vaccines stabilized and the government pushed to inoculate more people before the Olympics.

The government says 25.5% of Japanese have been fully vaccinated, still way short of the level believed to have any meaningful impact on reducing the risk for the general population.