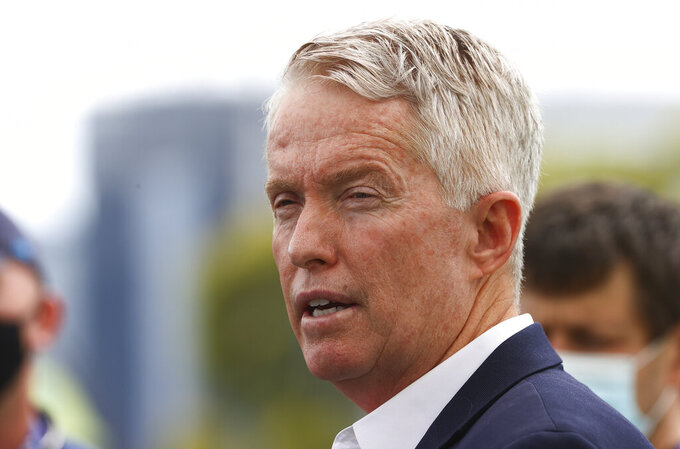 Australian Open tournament director Craig Tiley address the media in Melbourne, Australia, Thursday, Feb. 4. 2021. All competition at the six Australian Open tuneup events scheduled for Thursday were called off after a worker at one of the tournaments' Melbourne quarantine hotels tested positive for COVID-19. (Tennis Australia via AP)

MELBOURNE, Australia (AP) — It could have been canceled at any minute. It still could.

Australian Open tournament director Craig Tiley was always working on the assumption there'd be a massive hit financially for staging the year's first tennis major during the COVID-19 pandemic.

Organizers have spent 80 million Australian dollars (US$62 million) in cash reserves, built up over 10 years, and taken out a loan to get the season's first major started.

Regardless of the obstacles, Tiley always remained focused on a sweet spot, an angle that made it different.

Tiley told The Associated Press that he was not only committed to holding the tournament at its usual time of year (it was pushed back three weeks due to scheduling issues), he wanted to do something no Grand Slam managed to do in the pandemic last year: have sizeable crowds.

“That’s the angle we chose because we thought there’s an opportunity to ... showcase the sport and have the players play in front of fans,” Tiley said, looking fatigued and wearing a mask while sitting in a conference room beside his office underneath Rod Laver Arena.

The U.S. Open had no crowds on site and the French Open was limited to 1,000 per day. For its first five days, the Australian Open averaged just under 20,000 spectators per day.

“Momentum was building really nicely for us," Tiley said, "until — boom — we got the change.”

The “change” was a five-day hard lockdown from Saturday imposed by the state of Victoria to try to quash an outbreak of COVID-19 cases linked to Melbourne’s hotel quarantine system. The tournament suddenly went from pre-pandemic near-normalcy to empty stands and silence.

Tiley’s staff had a contingency plan ready in the event of a sudden lockdown, so it leapt swiftly into action. Despite assurances he’s had from authorities that the tournament will be able to finish — and fans may also return in a few days — nothing is guaranteed.

“Tomorrow, the government could say we have 10 new cases ... and we want you to shut the site down,” he said in a weekend interview. “We have a plan for that. But that’s not what we expect.”

For Tiley, it’s been that kind of year.

Planning a Grand Slam tournament in the middle of a pandemic was a logistical nightmare that involved flying 1,200 people — hundreds of players and their teams — to Australia from all over the world and arranging hotel quarantine for all of them in a country that had all but eliminated COVID-19.

Yet, despite the enormous costs and challenges, canceling the Australian Open this year was only briefly considered and then immediately taken off the table, Tiley said.

“It felt like we were drinking from a firehose every single day, gasping for air,” he said. “It’s just relentless.”

Paul McNamee, who was Australian Open tournament director before Tiley took over in 2006, described it as “six to eight months of torture.”

McNamee said the biggest challenge he faced in the job was a flood on center court the night before a women's singles final — a minor setback compared with dealing with a pandemic.

“You could have imagined it would have been easier in Paris or New York. Over there, it’s acceptable if there’s some outbreak. It’s a manageable situation in terms of PR anyway,” he said. “Here, there’s one case, it’s catastrophic.”

The strict isolation regulations in Australia inevitably led to a number of complaints from players, which Tiley said verged on “aggressive” at times.

Among those most upset were the 72 players forced into hard lockdown for 14 days after passengers on their charter flights to Australia tested positive for COVID-19. Because they were unable to leave their hotel rooms for two weeks, some players said they felt physically unprepared to play a Grand Slam.

Tennys Sandgren was one vocal critic. After his first-round loss to Alex de Minaur, he said, “I’ve never walked on to a court in a Grand Slam knowing that I’m probably not going to be able to win.”

No. 1 Novak Djokovic sent Tiley a letter last month suggesting ways to ease quarantine restrictions on players, including allowing them to stay in houses with private tennis courts. Djokovic later said in a statement his intentions were “misconstrued as being selfish, difficult and ungrateful.”

Tiley said he had more than 60 phone calls with the players over those two weeks in quarantine, spending 4 1/2 hours a day personally listening to their concerns.

“The people who had the biggest complaints were ironically some who are still in the Australian Open and their complaints were they didn’t have enough time to prepare,” he said, without mentioning any names, almost halfway through the tournament. “So it’s hard for me to reconcile that being a reason.”

He was disappointed by the complaints because as far as he was concerned, the tournament was doing the best it could given the circumstances.

“We’re offering A$86 million (US$66.7 million) in prize money. We haven’t reduced the prize money at all in the middle of the pandemic when everyone’s taking pay cuts,” he said. “We funded planes, we’re paying for all their expenses.”

But Tiley did emphasize these complaints came from a handful of players and that far more showed their appreciation and support.

Grigor Dimitrov summed this up after his fourth-round win over Dominic Thiem on Sunday.

“We have to be very thankful for being able to play a tournament in the middle of a pandemic and to pull that through in such a tough and delicate moment of where we’re at right now,” he said. “I think it’s amazing.”

Financially, the sacrifices this year will put a tight squeeze on the tournament for years to come.

“We’re still going to be starting from zero for the most part," said Tiley, a former player, coach and sports executive in South Africa, the U.S. and Australia.

But, he added, it has forced his team to come up with creative ways to diversify their revenue streams.

“I’m pretty confident in our skills to find ways to make money and it can't just be through the event.”

Tiley has trained his sights on the 2022 Australian Open, planning already in case the world is still gripped by a pandemic.

But if he's learned anything from the past year, it's how to manage things one problem at a time.

“Because it’s so relentless, you need to take a step back, take a deep breath, figure out a plan and do it in a much calmer, more considered way," he said. "That’s really worked.”