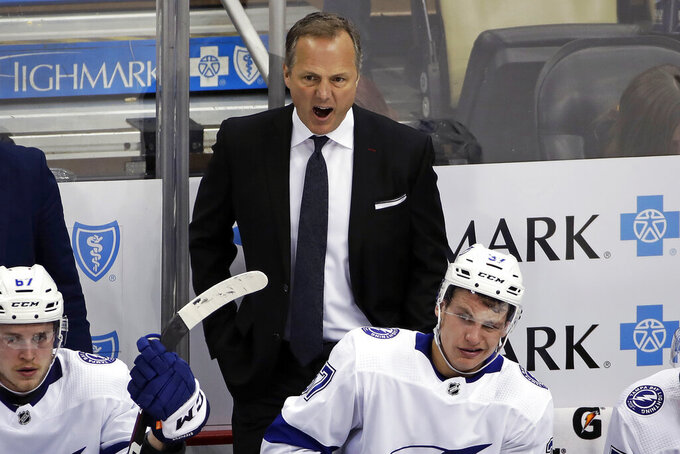 FILE - In this Feb. 11, 2020, file photo, Tampa Bay Lightning head coach Jon Cooper yells instructions during the third period of an NHL hockey game against the Pittsburgh Penguins in Pittsburgh. When Todd Reirden and Jon Cooper spent four months looking over video of the teams they coached this season, they saw almost polar opposites. Reirden's Washington Capitals started hot before their defensive game slipped. Cooper's Tampa Bay Lightning took a while to warm up, then won 14 of 21 games before the NHL season was halted in mid-March because of the COVID-19 pandemic. (AP Photo/Gene J. Puskar, File)

Vincent Trocheck was part of a wave of NHL players moved at the February trade deadline, jumping right into the lineup a day later for a learn-on-the-fly introduction to his new Carolina Hurricanes team.

“Obviously coming from a different team, you’re going to have a little bit of confusion,” he said. “Different systems, different styles of play.”

Those new additions are in a different position as the NHL returns from its pandemic shutdown. They’ve had months to study film. They’ve had two-plus weeks of camp-style workouts to build chemistry with teammates. And that could provide a big boost for the teams that added them five months ago for a (delayed) run at the Stanley Cup.

“Anybody who got traded at the deadline for any team in this tournament, I think they’re going to benefit from it,” said New York Islanders coach Barry Trotz, whose team acquired center Jean-Gabriel Pageau from Ottawa.

That wasn’t the plan, of course, when teams made deals ahead of the Feb. 24 deadline, which saw a record 32 trades and a record-tying 55 players dealt that final day. The expectation for playoff-contending teams was for new arrivals to spend the final six weeks of the regular season carving out roles ahead of the postseason.

Instead, the coronavirus halted everything in March.

The league allowed teams to reopen facilities for voluntary workouts in June. Then came two weeks of training camp in July, leading to this weekend’s start of the playoffs featuring 24 teams divided between Toronto and Edmonton, Alberta.

Amid the shutdown, some injured players had time to heal. Coaches who took over during the season got their own fresh start. And trade-deadline acquisitions have had a chance to catch up, too, from Washington winger Ilya Kovalchuk to Vegas goaltender Robin Lehner.

Fittingly, it was one of those players — Conor Sheary, back with the Pittsburgh Penguins — who scored the first goal of the NHL’s restart in Tuesday’s exhibition loss to Philadelphia.

“Players come in, it’s at the end of the season, there’s probably a little bit of pressure to perform,” Tampa Bay coach Jon Cooper said. “You don’t know anybody. You’re unfamiliar with the coaches, with the system, your teammates — and then all of a sudden, you get four months kind of off.

“But that didn’t mean you were four months away from your coaches or your teammates. Now you’re in the group chats, you’re communicating with everybody. You know everybody personally a lot better. And then when you come back, it’s almost like: wow, it’s your second year with the team.”

Coleman said they were “kind of thrown the kitchen sink as far as systems and trying to pick things up on the fly.”

“Obviously having a camp here has been great because I’m able to focus on the systems and really not have to worry about it in-game,” Coleman said. “You kind of want that stuff to be just second nature and not have to think about it. I think it’s been good. It feels like I’m part of the team now and not just the new guy, and it’s exciting that we have this chance.”

Trocheck, who had 31 goals two seasons ago with Florida, said the time off helped him more than his seven games with Carolina by providing time to study more film. Then came camp workouts with teammates to become “100% acclimated.”

“I think they’re the ones that need the time the most,” Hurricanes coach Rod Brind’Amour said. “You put a system in place and you kind of expect all the guys to grasp it, but you realize quickly that you watch it 100 hours a day, four months, you know it inside-out.

“Players, that’s not how they get it. They get it from practicing the reps.”

In all, 29 players acquired on deadline day are on NHL playoff rosters, spread across 17 of 24 teams. Other teams, like reigning Cup champion St. Louis and Winnipeg, made moves earlier in February.

“It was almost like I forgot we traded for them because they just fit so well, fit in so nicely,” Jets general manager Kevin Cheveldayoff said of Cody Eakin and Dylan DeMelo. “It feels like they’ve been part of the group from the beginning. And maybe it’s because you pause and you have the restart that we do here right now, that everybody’s on that even footing.”