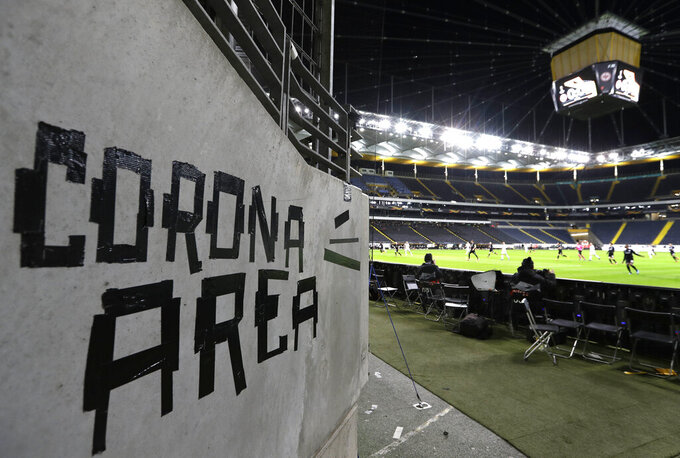 FILE - In this Thursday, March 12, 2020 file photo shows a sign taped by Eintracht fans on a wall of the stadium during a Europa League round of 16, 1st leg soccer match between Eintracht Frankfurt and FC Basel in Frankfurt, Germany. German Bundesliga will restart on May 16. (AP Photo/Michael Probst)

DÜSSELDORF, Germany (AP) — When the German Bundesliga restarts on May 16 in empty stadiums, it will blaze a trail for other leagues shut down by the coronavirus.

The English Premier League, Serie A and La Liga will all be watching closely as the German competition faces risk factors which could lead to more disruption or another shutdown.

The German league says its plans minimize the risk from the virus. However, it's aware it needs to remain alert to finish the season in June as planned.

“Every game day is a chance to prove that we deserve the next game day,” league CEO Christian Seifert said on Thursday.

The German restart plan is built around regular coronavirus testing for players and staff, with more than 20,000 samples needed just to finish the season in the top two divisions.

Twelve people, among them players and staff, have tested positive since tests began last week of the 36 clubs in those divisions. Some have subsequently tested negative in follow-ups.

League rules aim both to slash the risk of players getting infected, and to limit the possible spread. Players, and anyone living with them, are asked to limit travel outside the home. Players leave the team bus in masks, and there's no pregame handshake.

But the plan has limits. Germany isn't following South Korea's K-League with a ban on spitting or close-quarters conversations on the field. And if players test positive, clubs don't have to put the rest of the team in isolation.

Cologne player Birger Verstraete said he found it hard to focus on soccer when the club kept on training after two players and a physio tested positive last week. Contrast that with the K-League, which is imposing a two-week quarantine on any team with a positive test — and its recent opponents, too.

Even if the league's plan works perfectly, the coronavirus could still affect games.

The same German government meeting on Wednesday which allowed the Bundesliga to resume also outlined a so-called “emergency brake” mechanism. That allows regional officials to reimpose tough lockdown restrictions in their area if there's a major outbreak with more than 50 coronavirus cases per 100,000 people within a week.

It's not yet fully clear how those fallback measures might affect training and games without fans.

Even after the league set down rules, not everyone followed them.

Salomon Kalou has barely played this season, but he's affected the Bundesliga's public image more than the likes of Robert Lewandowski and Erling Haaland.

The 34-year-old Hertha Berlin forward posted video online showing him flouting social distancing rules by shaking hands with a teammate and a staff member, and bursting in on a teammate's coronavirus test.

Kalou apologized and was swiftly suspended, but he and the league's plan came in for widespread criticism in Germany.

Politicians and police are worried about fans turning up to games, even though they're not allowed in. Games could be shut down in extreme cases.

Several hundred fans of Borussia Mönchengladbach gathered outside the stadium in March for the Bundesliga's only game in an empty stadium so far. When the league resumes, it will be with security guards inside and outside the arenas.

With the fierce rivalry between Borussia Dortmund and Schalke scheduled for May 16, passions will run high on the opening weekend.

Bremen state interior minister Ulrich Mäurer suggested in March, before the league was suspended, that games in empty stadiums could have to be called off if fans gathered. The police union in the state of North Rhine-Westphalia has also raised concerns.

A two-month break means players have had to recover fitness in a similar way to preseason training. Being out of practice could mean more injuries.

Some states allowed teams to return to training earlier than others, potentially giving them an advantage.

Werder Bremen, which was slower to return, wanted the restart delayed until May 23, citing fairness and injury risks. It had to settle for its opening game being played on Monday, May 18, as the last of that weekend's fixtures.

Some teams were still waiting on Thursday for permission to resume full training, rather than working in small groups. With more midweek games than usual, fixture congestion could also pose fitness problems.

James Ellingworth is at https://twitter.com/jellingworth