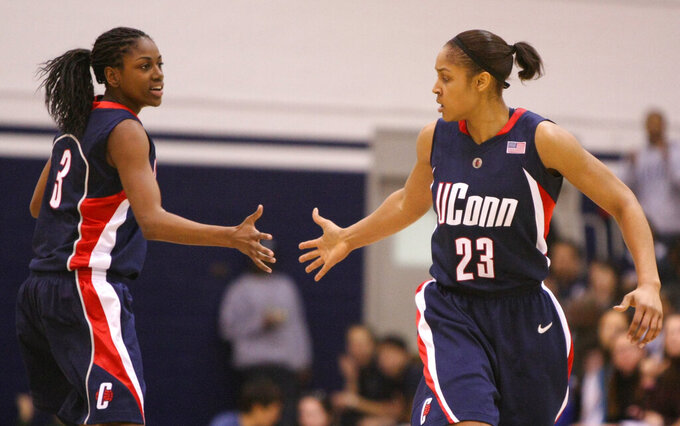 FILE - In this Jan. 31, 2009, file photo, Connecticut's Maya Moore (23) is congratulated by Tiffany Hayes after scoring against Georgetown during the second half of an NCAA college basketball game in Washington. Renee Montgomery and Hayes appreciated what former UConn teammate Moore was doing when the All-Star forward stepped away from basketball two years ago to focus on criminal justice reform. The Atlanta Dream guards admit they weren't sure why she couldn't continue keep playing at the same time. Now they have a better understanding. (AP Photo/Luis M. Alvarez, File)

The Atlanta Dream guards admit they weren't sure why she couldn't continue playing at the same time.

Now they have a better understanding.

“I had no idea,” Hayes said on a Zoom call last week. “I thought she wanted a break or something. ... Now I get it, I see what she was going through and trying to accomplish. I commend her for what she’s doing.”

Hayes and Montgomery are following Moore's example with both deciding to take the upcoming WNBA season off to help with social justice reform and voter registration. They credit Moore's decision to put her career on hold to help family friend Jonathan Irons get a conviction overturned for inspiration.

Irons was freed on Wednesday, walking out of a Missouri penitentiary nearly four months after a judge overturned his conviction on charges of burglary and assault.

“I saw what she was doing and admired it from afar,” Montgomery said. “Now I start to get it. ... I see why she couldn’t do both. For me, if I’m all focused on something else, I can’t do both. I started to just get why she did what she did.”

The trio of former UConn greats, along with Tina Charles, have come a long way off the court since they led the Huskies to an undefeated season in 2008-09.

UConn coach Geno Auriemma has been impressed by what many of his former players are accomplishing off the court.

“What's amazing was all these guys were very much extroverts on the court,” the Hall-of-Fame coach told The Associated Press in a phone interview. “On the court, they have big games and personalities. They dominated games. Yet off the court they were so different, very introverted."

He always knew they were passionate.

“One thing you can probably draw a line through was the passion they have,” he said. "This is coming out right now, and I couldn't be more proud.”

Montgomery, Moore and Hayes credit Auriemma for helping guide them, even long after graduation. He was one of the first calls that Montgomery and Moore made when they were deciding whether to take time away from basketball.

“A lot of our conversations were about being informed and intelligent,” he said. “When they put their mind to it, they go all in. They were all in on basketball. They were following who they are.”

Montgomery and Hayes smiled at the thought that a dozen years ago the UConn players had any aspirations of being social activists. They do know that Auriemma and the UConn staff have always fostered players using their voices — even if it took a little while for them to do so.

While most college coaches took to social media to support the movement, the current UConn Huskies were one of the first college teams to put out a statement about racial inequalities with the blessings of their coach.

Hayes said there's no doubt that her group would have done something similar had the current movement happened during their time in Connecticut.

“I know Renee and Maya would have led the way,” said Hayes, who was a freshman on that championship team.

Both Hayes and Montgomery loved seeing Auriemma and his wife and family at a protest in his community last month. While they appreciated his support, they were a little concerned about the 66-year old being in the higher risk category for the virus.

“He doesn’t need to be out there. Appreciate his support, but we don’t want him to be at risk,” Montgomery said.

Skipping the upcoming WNBA season, which is set to begin later this month in Florida at a single site because of the coronavirus pandemic, was not an easy decision. After the death of George Floyd, neither Montgomery nor Hayes could focus on basketball.

“I knew my mind wasn’t there, my heart wasn’t there,” Montgomery said. “Since those 8 minute and 46 seconds, everyone was a little bit changed. That was the moment I knew I needed to do something different this year.”

Hayes said she has a different mindset now.

“I stopped going to workouts since my mind wasn’t in it anymore.,” she said. “I think that was one of the main reasons why I feel this is the right thing to do right now.”