Tripoli forces say they have ended siege of Libyan capital 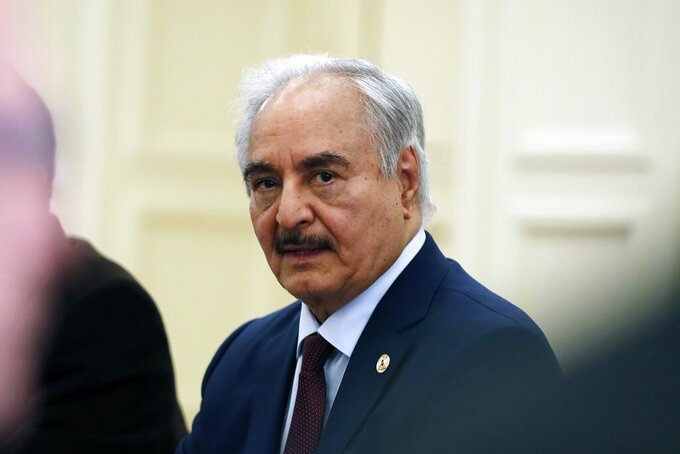 FILE - In this Jan. 17, 2020 file photo, Libyan Gen. Khalifa Hifter joins a meeting with the Greek Foreign Minister Nikos Dendias in Athens. A spokesman said late Wednesday, June 3, 2020, that forces allied with the U.N.-supported government in Libya have captured a key airport in Tripoli from rival troops attempting to take control of the capital for over a year. The fall of Tripoli International Airport came two days after the U.N. announced Libya’s warring parties agreed to resume cease-fire talks following weeks of heavy fighting. Since 2015, Libya has been divided between two governments, one in the east and one in the west. (AP Photo/Thanassis Stavrakis, File)

CAIRO (AP) — Forces allied with the U.N.-supported government in Libya said Thursday they have regained control of all of Tripoli's entrance and exit points after taking back the airport, and claimed that the siege by rival troops trying to capture the capital for over a year has effectively ended.

“In these historic moments, we announce that all municipal boundaries of Tripoli have been liberated,” Mohamed Gnono, spokesman for the Tripoli-allied forces, said in a video posted on social media.

Libya analysts, however, warned it was too early to conclude that the fighting over Tripoli was finished. Since 2015, Libya has been divided between two governments, one in the east and one in the west. Hifter's east-based forces launched an offensive in April 2019 to capture the capital from the west-based Government of National Accord.

“Hifter’s plan to take over Tripoli has been smashed," Col. Salah al-Namroush, an undersecretary with the defense ministry, said after the airport's capture. “Today, we have fulfilled our pledge to liberate Tripoli airport.”

The airport was closed in 2014, following heavy fighting and destruction. For years, flights were diverted to the Mitiga airport but that one was shut down several times over the past year due to heavy shelling blamed on Hifter’s forces.

The front-line developments came after the U.N. earlier this week announced that Libya’s warring parties had agreed to resume cease-fire talks. Photos of bombed-out Libyan commercial planes at the airport were posted on the official Facebook page of the Tripoli-allied forces. Videos of the government-affiliated militias celebrating outside the airport circulated online.

“The fall of Tripoli airport is a symbolic achievement," said Claudia Gazzini, a senior analyst with the International Crisis Group. “It is the base of Hifter's forces since more than a year and one of the main conflict lines in the capital.”

However, Gazzini said she believed it was too early to conclude that Hifter's offensive is over, given the seesaw nature of the conflict.

“We have seen the boundaries of the conflict shift by kilometers everyday; forward one day and backward another,” she added. “There is still room for a continued offensive. It all depends on how much military backing Hifter’s backers are willing to give him.”

In recent months, the Tripoli militias, backed by Turkey, Italy and Qatar have retaken some key towns surrounding the capital. However, Hifter's forces, supported by Russia, Egypt, Saudi Arabia and the United Arab Emirates, have responded with airstrikes.

U.S. and Libyan officials have accused Russia of deploying fighters from the Wagner Group in key Libyan battlegrounds.

Last month, the U.S. military accused Russia of deploying 14 aircraft to eastern Libya to help Hifter’s forces, saying the move was part of Moscow’s goal of establishing a foothold in the region that could threaten NATO allies. Russia dismissed those claims and has repeatedly denied any role in fighting in Libya.

On Monday, the U.N. announced Hifter's forces and the Tripoli militias had agreed to resume talks. The U.N. acting special representative Stephanie Williams met Wednesday with a delegation representing Hifter’s forces to follow-up on the agreement. She is expected to hold similar talks with the Tripoli government in “the coming days,” U.N. spokesman Stephane Dujarric said.

The escalation in fighting comes against the backdrop of the coronavirus pandemic; Libya has about 170 confirmed cases but testing remains scarce. There are fears a large outbreak would have a severe impact, given the protracted conflict and the country’s poor healthcare system.

The U.N. mission said it hopes the new talks will “mark the beginning of calm on the ground” that can give authorities the chance to focus on curbing the spread of the virus.

The North African country slid into civil war following the ouster and killing of longtime dictator Moammar Gadhafi in 2011.

The Tripoli forces said two medics were killed Thursday near a field hospital where they worked near the Libyan capital. Gnono, the spokesman, blamed Hifter’s fighters, saying they had booby trapped areas before pulling out.