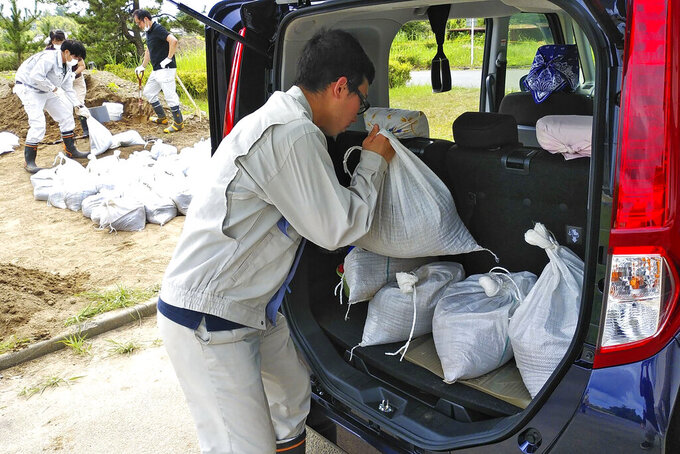 A city official loads sandbags into the car of an applicant in Iwaki, Fukushima prefecture, Monday, July 26, 2021 in preparation for a tropical storm heading toward northeastern Japan. Storm and high wave warnings were issued for Miyagi and Fukushima prefectures. (Kyodo News via AP)

ICHINOMIYA, Japan (AP) — An offshore tropical storm brought wind and rain to the Tokyo region and affected some Olympic events Tuesday as it headed toward northeastern Japan, where stormier conditions were forecast.

The Japan Meteorological Agency predicted Nepartak would bring heavy rains, strong winds and high waves to northeastern Japan in advance of its landfall around midday Wednesday north of the capital region.

The tropical storm had winds of 72 kilometers per hour (44.7 mph) around midday Tuesday off Chiba on Japan's central-eastern coast, the agency said. It forecast the storm would maintain its current strength through the day but would weaken before making landfall near the city of Akita, about 570 kilometers (340 miles) northeast of Tokyo.

Storm and high wave warnings were issued for the coastal areas of Miyagi and Fukushima prefectures.

Some traffic disruptions are expected in the northern region. Shinkansen super-express train services were to be suspended from Tuesday evening possibly until Wednesday morning, according to East Japan Railway Co.

Chief Cabinet Secretary Katsunobu Kato at a regular news conference urged residents in the northern region to use caution and evacuate early in case of increased risks of flooding or mudslide.

At the Olympics, some surfing events planned for Wednesday were moved to Tuesday, but the storm gave the competitors big waves for their final day of competition. Archery, rowing and sailing also adjusted their schedules.