Trump: Poland to get some US troops withdrawn from Germany 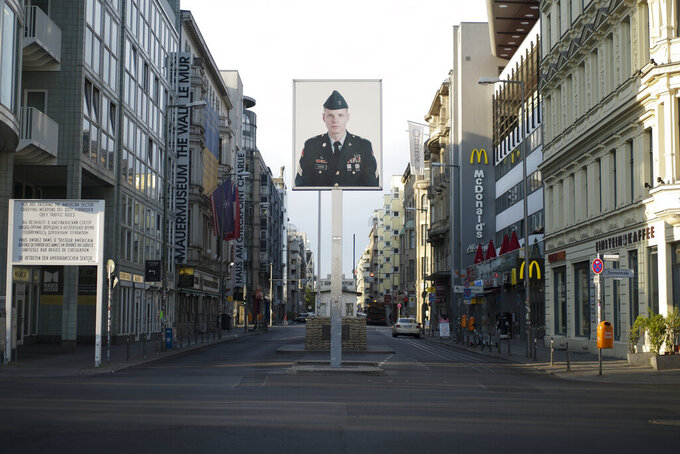 FILE - In this June 9, 2020, file photo, a picture of a former American soldier is displayed at the former U.S. army Checkpoint Charlie in Berlin, Germany. In vowing to pull thousands of U.S. troops from Germany, President Donald Trump is following a pattern of disruptive moves against allies that have dismayed many of his fellow Republicans. Trump has consistently promised to bring American troops home, dismissing the conventional view that a far-flung U.S. military presence, while costly, pays off in the long run by ensuring stability for global trade. Earlier this week he said the 34,500 U.S. troops in Germany would be reduced to 25,000. (AP Photo/Markus Schreiber, File)

WASHINGTON (AP) — President Donald Trump said Wednesday that some of the 10,000 American troops he’s pulling out of Germany will be moved to Poland on NATO’s eastern flank against Russian aggression.

“We’re going to be reducing our forces in Germany,” Trump said in the Rose Garden while standing alongside Polish President Andrzej Duda. “Some will be coming home and some will be going to other places, but Poland would be one of those other places in Europe.”

Trump has said he is determined to cut the number of troops in Germany from about 35,000 to 25,000. Shifting forces out of the country has long been rumored and is in line with Pentagon efforts to put more troops in the Indo-Pacific. But Trump’s suggested last week — and again Wednesday — that the move is also tied to his anger over Germany’s failure to meet NATO defense spending goals.

Trump said unlike Germany, Poland is one of only eight members of the alliance that are fulfilling NATO's target pledge of spending 2 percent of their gross national products on their own defense. He criticized Germany several times and said transferring the troops to Poland also sends a strong signal to thwart Russian aggression.

“But I think a stronger signal sent to Russia is the fact that Germany is paying Russia billions of dollars to purchase energy from Russia ... and I'm saying ‘What’s that all about?' ... They're spending billions to buy Russia and then we're supposed to defend them from Russia. So that doesn't work too well."

Neither Trump nor Duda said how many more troops would be sent to Poland. Under an agreement announced last year, the U.S. already announced it was sending about 1,000 more troops to Poland, and progress is being made, officials said, to lay the groundwork for those moves. Based on the agreement with Poland, the U.S. will add a division headquarters, a combat training center, a unmanned aircraft squadron and structure to support an Army brigade that could rotate in and out of the country.

This was Duda’s third visit to Washington since Trump took office and the first visit by a head of state to the White House since the coronavirus pandemic shut things down. The U.S. and Polish delegations and members of the media were tested before the two leaders met in the Oval Office, although none of the officials wore masks.

The visit came just days before Duda seeks reelection in a ballot Sunday. Opinion polls show Duda with about 40% support as he seeks a second five-year term, ahead of Warsaw Mayor Rafal Trzaskowski, who has nearly 30%. Much of Trzaskowski’s support comes from Poles angry at a government they blame for corruption, inciting homophobia and xenophobia, and undermining the country’s democratic foundations.

If Duda falls short of the majority of the vote needed to win outright, it would trigger a tight runoff election July 12.

Duda could get a boost from his White House visit — one so close to Sunday’s vote that some view it as election interference by the U.S. leader. Duda said he and Trump were just fulfilling their presidential duties. Trump said he thinks Duda “will do very well with or without us.”

Trump and Duda said they discussed energy security, including a natural gas pipeline Russia wants to transport more gas into Europe. U.S. sanctions have obstructed construction of the pipeline, causing rifts between the U.S. and its European allies that want the gas. Other topics included cybersecurity, telecommunications, 5G networks, civil nuclear energy and economic cooperation.

As an example of the developing economic cooperation, Duda mentioned plans announced Wednesday by Google to invest over $1 billion into an information technology center in Poland.

Joining forces against the pandemic, the leaders said U.S. and Polish scientists will be working closely together on developing medication and vaccine against the coronavirus.

Duda also thanked Trump for the quick restoration of the monument to Poland’s and America’s independence fighter, 18th century Polish Gen. Tadeusz Kosciuszko, whose statue before the White House was vandalized during recent protests.