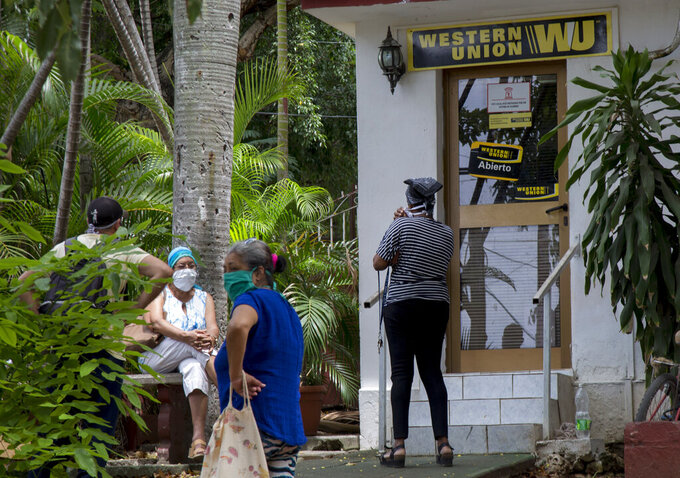 People stand outside a Western Union in the Vedado neighborhood of Havana, Cuba, Friday, June 12, 2020. Fincimex is a Cuban state corporation that works with foreign credit-card and money-transfer businesses and handles remittances sent to Cuba through Western Union by families in Cuban-American communities around the U.S. (AP Photo/Ismael Francisco)

HAVANA (AP) — A week and a half ago, U.S. Secretary of State Mike Pompeo issued a strongly worded announcement that the Trump administration was prohibiting business with Fincimex, a Cuban state corporation that works with foreign credit card and money transfer businesses, among others.

Fincimex handles hundreds of millions of dollars in remittances sent to Cuba through Western Union by families in Cuban-American communities in South Florida and around the nation. Would a ban on business with the military-run company mean an end to the remittances that so many Cuban families need to put food on the table?

The State and Treasury departments wouldn’t say. Meanwhile, thousands of families rushed to send money before the ban went into effect on Friday.

What happened next offers a small window into the chaos behind the administration’s execution of one of its top foreign policy priorities — weakening the communist-run Cuban government and its longstanding alliance with President Nicolás Maduro of Venezuela.

As expected, the administration published a regulation Friday in the Federal Register — the official gazette of the U.S. government. The new rule sanctions anyone doing business with military-run businesses in Cuba, including three hotels, two scuba-diving centers and a swimming-with-dolphins center at a beach resort in eastern Cuba.

But it doesn’t mention Fincimex. That led Cuba-watchers to speculate Friday morning that the Trump administration had simply backed off its threat to potentially cut remittances to Cuba. A few hours later, the State Department said omitting Fincimex had simply been a clerical error and the Cuban company would indeed be sanctioned.

“The correction will be published in the Federal Register in the coming days,’’ the State Department said.

The new regulation will not, however, actually affect Americans’ ability to send remittances to family in Cuba, according to a person familiar with the process.

Western Union is expected to be able to continue sending money to Cuba through Fincimex even after the new ban goes into effect, the person said on condition of anonymity.

The U.S. company declined to comment on any future regulations, saying Friday simply that “we can confirm that our business and services from the U.S. to Cuba are operating as usual and in compliance with U.S. law and regulations.”

A U.S. bank that works with MasterCard to operate a small number of cards allowing cash withdrawals at ATMs in Cuba cut off those cards on Thursday evening, but otherwise the Fincimex ban was expected to have a minimal impact on the island, said Collin Laverty, who runs head of Cuba Educational Travel, one of the largest companies bringing U.S. travelers to Cuba. Laverty also consults for U.S. companies who want to do business in Cuba.

“It kind of is symbolic of the Trump approach to Cuba, which is to make a lot of noise, cause a lot of confusion,’’ he said. “Sometimes they follow though with regulations, sometimes they don’t ... the policy’s been extremely inconsistent and incoherent.”

Despite Western Union’s reassurances, many Cubans and their families in the U.S. have spent the last week assuming that remittances were about to be cut off in the middle of one of Cuba’s deepest economic crises in decades, fueled in large part by the near-total closure of flights in and out of the island due to the coronavirus pandemic.

Yadamis Roque is a 47-year-old homemaker with a disabled 20-year-old daughter and a 12-year-old son. She lives on remittances sent by her mother in Florida.

As she waited on line outside a Western Union in Havana on a recent weekday, she said she was still assuming that her lifeline was about to be cut off.

“I will be affected,’’ she said. “This has been a really heavy blow ... why do we have to suffer as a result of this, and in the middle of a pandemic!’’