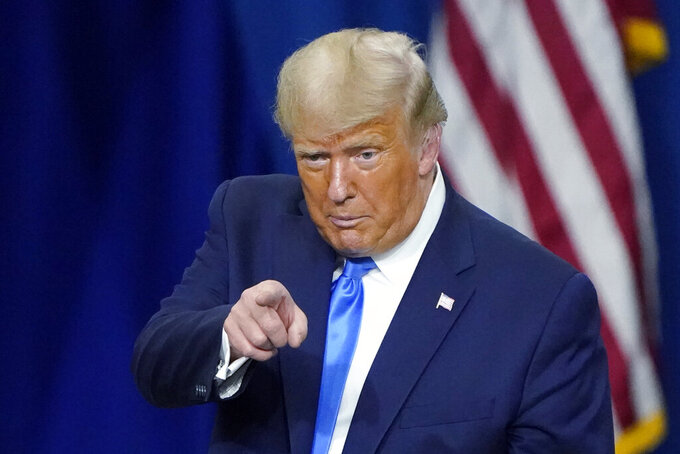 CHARLOTTE, N.C. (AP) — More than three-and-a-half years into his presidency and 40 days from an election, President Donald Trump on Thursday launched what aides termed a “vision” for health care heavy on unfulfilled aspirations.

“This is affirmed, signed, and done, so we can put that to rest,” Trump said. He signed an executive order on a range of issues, including protecting people with preexisting medical conditions from insurance discrimination.

But that right is already guaranteed in the Obama-era health law his administration is asking the Supreme Court to overturn.

House Speaker Nancy Pelosi dismissively said Trump's “bogus executive order on pre-existing conditions isn’t worth the paper it’s signed on.” Democrats are betting heavily that they have the edge on health care this election season.

Trump spoke at an airport hangar in swing-state North Carolina to a crowd that included white-coated, mask-wearing health care workers. He stood on a podium in front of a blue background emblazoned with “America First Healthcare Plan.” His latest health care pitch won accolades from administration officials and political supporters but failed to impress others.

“Executive orders issued close to elections are not the same thing as actual policies,” said Katherine Hempstead, a senior policy adviser with the nonpartisan Robert Wood Johnson Foundation, which works on a range of health care issues, from coverage to quality.

Trump’s speech served up a clear political attack, as he accused Democrats of wanting to unleash a “socialist nightmare” on the U.S. health care system, complete with rationing. But Democratic nominee Joe Biden has rejected calls from his party’s left for a government-run plan for all. Instead, the former vice president wants to expand the Affordable Care Act, and add a new public program as an option.

Trump returned to health care amid disapproval of his administration's handling of the coronavirus pandemic and growing uncertainty about the future of the Obama-era law.

“'If we win we will have a better and less expensive plan that will always protect individuals with preexisting conditions,” Trump declared.

But while his administration has made some progress on its health care goals, the sweeping changes Trump promised as a candidate in 2016 have eluded him.

The clock has all but run out in Congress for major legislation on lowering drug costs or ending surprise bills, much less replacing the Affordable Care Act, or “Obamacare.”

Pre-election bill signing ceremonies on prescription drugs and surprise medical charges were once seen as achievable — if challenging — goals for the president. No longer.

Trump's speech Thursday conflated some of his administration's achievements with policies that are in stages of implementation and ones that remain aspirational.

Democrats are warning Trump would turn back the clock if given another four years in the White House, and they're promising coverage for all and lower drug prices.

Health and Human Services Secretary Alex Azar said Trump's executive order would declare it the policy of the U.S. government to protect people with preexisting conditions, even if the ACA is declared unconstitutional. However, such protections are already the law, and Trump would have to go to Congress to cement a new policy.

On surprise billing, Azar said the president's order will direct him to work with Congress on legislation, and if there's no progress, move ahead with regulatory action. However, despite widespread support among lawmakers for ending surprise bills, the White House has been unable to forge a compromise that steers around determined lobbying by interest groups affected.

“So, after 20 years of national public policy debate and hard-fought congressional and presidential approval, how does Trump conclude he can restore these protections, should the Republican Supreme Court suit overturn them, with a simple executive order?” asked Laszewski.

The American Cancer Society Cancer Action Network said the president's order is not the equivalent of Obama's law. “Should the administration succeed in its case to throw out the law, the executive order will offer no guaranteed patient protections in its place,” said Lisa Lacasse, the group's president.

Prescription drug inflation has stabilized when generics are factored in, but the dramatic price rollbacks he once teased have not materialized. In his speech the president highlighted another executive order directing Medicare to pay no more than what other nations pay for medications, but it remains yet to be seen how that policy will work in practice, if it can overcome fierce opposition from the drug industry.

Trump said millions of Medicare recipients will soon receive a card in the mail containing $200 that they can use to help pay for prescription medications. “I will always take care of our wonderful senior citizens," he promised. No detail was immediately available on when seniors would get such a card or how the cost of the assistance would be paid for.

More broadly, the number of uninsured Americans started edging up under Trump even before job losses in the economic shutdown to try to contain the coronavirus pandemic. Various studies have tried to estimate the additional coverage losses this year, but the most authoritative government statistics have a long time lag. Larry Levitt of the nonpartisan Kaiser Family Foundation says his best guess is “several million.”

Meanwhile, Trump is pressing the Supreme Court to invalidate the entire Obama health law, which provides coverage to more than 20 million people and protects Americans with medical problems from insurance discrimination. That case will be argued a week after Election Day.

The death of Supreme Court Justice Ruth Bader Ginsburg has added another layer of uncertainty. Without Ginsburg, there's no longer a majority of five justices who previously had voted to uphold the ACA.

Democrats, unable to slow the Republican march to Senate confirmation of a replacement for Ginsburg, are ramping up their election-year health care messaging. It's a strategy that helped them win the House in 2018.

A recent Kaiser Foundation poll found Biden had an edge over Trump among registered voters as the candidate with the better approach on making sure everyone has access to health care and insurance, 52% to 40%. The gap narrowed for lowering costs of health care: 48% named Biden, while 42% picked Trump.

Trump unveiled his agenda at the start of a two-day swing to several battleground states, including the all-important Florida. There, he held a rally in Jacksonville and was to court Latino voters at an event in Doral on Friday. From there, Trump will court black voters in Atlanta and attend a fundraiser at his Washington hotel before ending Friday with another rally in Newport News, Virginia.

The scramble to show concrete accomplishments on health care comes as Trump is chafing under criticism that he never delivered a Republican alternative to Obamacare.

“We’ve really become the healthcare party — the Republican Party — and nobody knows that,” he said Thursday. “The news doesn’t talk about it.”