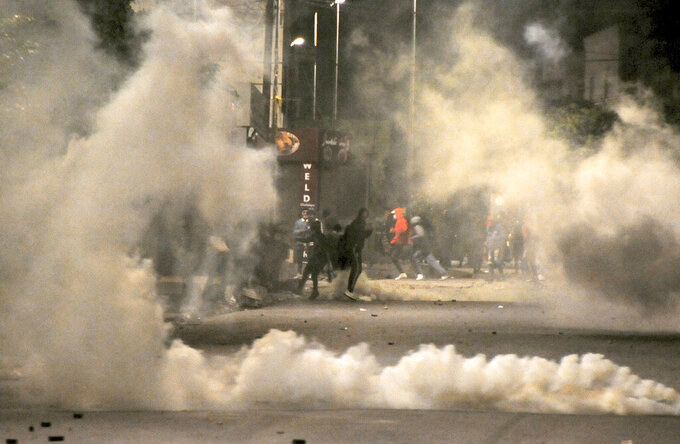 FILE - In this Jan. 19, 2021 file photo, demonstrators face police officers during clashes in Ettadhamen City near Tunis. Protests have swept towns and cities throughout Tunisia for a week, often turning to violence as demonstrators denounce what they say are broken promises from the government, which hasn't been able to turn around an economy on the verge of bankruptcy. (AP Photo/Hassene Dridi, File)

TUNIS, Tunisia (AP) — Tunisia is extending its virus curfew and banning demonstrations as it tries to stem a rapid rise in infections and calm tensions after a week of protests and rioting over economic troubles.

New clashes between protesters and police broke out Saturday hours after the new virus restrictions were announced.

Tunisia reported 103 virus-related deaths Thursday, the highest figure to date in the country of 11 million people. It also has among the highest rates in Africa. Local media reports cite doctors describing hospitals that are already too full to accept more virus patients.

The rising infections are raising new alarm at a time when the government is facing unrest among youth nationwide over poverty and lack of jobs.

Hundreds of protesters gathered Saturday on the central Tunis thoroughfare Avenue Bourguiba to demand the release of those arrested during clashes with police over the past week. Human rights groups say some 1,000 people were detained and dozens ordered jailed for vandalism and theft.

The protesters denounce what they say are broken economic promises from the government in the country that unleashed the Arab Spring uprisings exactly a decade ago. With a third of young Tunisians out of work, most protesters are disillusioned youth with disparate grievances.

“No more fear, the street belongs to the people!” shouted demonstrators, and others chanted “the people want the fall of the regime!" The crowd also chanted the slogan of Tunisia's 2010-2011 revolution: ”employment, freedom, dignity."

The demonstration had been authorized for two hours, and police fired tear gas to disperse the crowds when the two hours were up.

According to the new virus rules announced Saturday, gatherings will be prohibited in public areas until Feb. 14 and the country's existing 8 p.m.-5 a.m. curfew will also be extended until then, Tunisian Health Ministry spokesperson Nissaf Ben Alaya said.

Starting Monday, the government is also forbidding travel between regions and ordering all people over 65 to stay at home as part of stricter virus measures announced Saturday by Ben Alaya.

Restaurants and bars will remain closed except for takeout food. Schools and universities can resume studies Monday but many classes will be transferred online.

Ben Alaya threatened “drastic measures” against violators, saying the country is “at a critical juncture” in its battle against COVID-19.

The scientific committee which advises the government on the pandemic recommended a strict lockdown on weekends, the director of the Pasteur Institute in Tunis, Hachemi Louzir, told official news agency TAP. But the government steered clear of that in Saturday’s announcement as it tries to balance health concerns with economic troubles. The country was already in a protracted financial crisis that has been worsened by the pandemic.