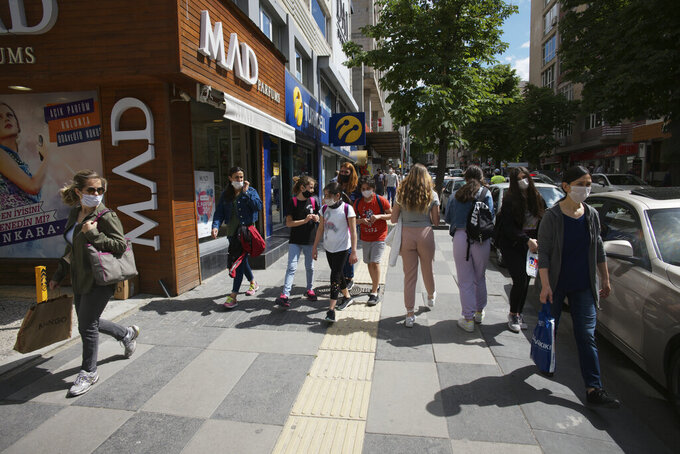 People walk along a popular street, in Ankara, Turkey, Wednesday, June 3, 2020, days after the government lifted a series of restrictions imposed to fight the coronavirus pandemic. People crowded popular streets and parks while restaurants and cafes welcomed sit-in customers and beaches and museums reopened as part of Turkey's broadest easing of coronavirus restrictions. (AP Photo/Burhan Ozbilici)

ANKARA, Turkey (AP) — Turkey and Russia have agreed to cooperate in the development of a coronavirus vaccine and plan to carry out joint clinical trials, the Turkish health minister said Wednesday.

Health Minister Fahrettin Koca said scientific advisers from the two countries were scheduled to hold a second round of talks later this week.

A total of 22 Turkish universities and research centers are working to develop a vaccine, and four of them have advanced to the animal-testing stage, Koca said.

The minister also said that Turkey has seen the benefit of the malaria drug hydroxychloroquine and will continue to administer it to COVID-19 patients, despite concerns raised over the drug.

Koca said that unlike other countries, Turkey has been using the drug early in COVID-19 threatment.

Turkey recorded 867 confirmed virus cases and 24 deaths between Tuesday and Wednesday, the minister said. The update brought total confirmed cases in the country to 144,422 and the death toll in the pandemic to 4,609.