U18 tournament means more for NHL scouts because of pandemic 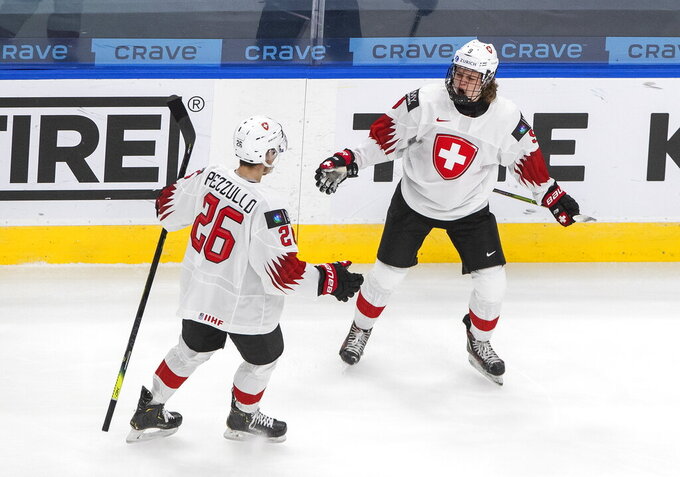 FILE - In this Dec. 27, 2020, file photo, Switzerland's Attilio Biasca (9) and Rocco Pezzullo (26) celebrate a goal during the first period IIHF World Junior Hockey Championship game against Finland in Edmonton, Alberta. The Under-18 men’s world championship that begins Monday is the final chance to see some of the top prospects eligible for the 2021 NHL draft, and the first chance for scouts and executives to see many in person. (Jason Franson/The Canadian Press via AP, File)

Two rinks in the outskirts of Dallas will be the center of the hockey universe the next week and a half for both NHL executives preparing for the draft and many of the top prospects they haven't gotten a chance yet to see in person.

The International Ice Hockey Federation's under-18 world championships is an important annual tournament featuring some of the best players eligible for the draft. It's under the microscope even more this year because of how the coronavirus pandemic wreaked havoc on developmental leagues, some of which didn't have a season.

The tournament is the last chance this year to see what Columbus Blue Jackets general manager Jarmo Kekalainen called “the cream of the crop” of draft prospects. Unlike most years, it's also the only chance for GMs and scouts to see some of the best players in person before the draft this summer.

"The best players are all jammed into one place," Los Angeles Kings scouting director Mark Yannetti said. “It’s a great thing to see the kids, and especially this year because if you don’t see a kid live, it’s really, really hard to get the full measure of a player."

This tournament didn't exist a year ago, throwing 2020 draft preparations into uncertainty. Teams had almost two full seasons' worth of viewings and video on players until sports came to a halt.

Hockey never got going in the Ontario Hockey League, which last week abandoned plans to hold a season, and it was limited to varying extents in the other Canadian junior leagues. The Canadian Hockey League canceled the Memorial Cup tournament that usually serves as a national junior championship and another scouting opportunity.

Most of the top American prospects got on the ice with the U.S. National Team Development Program, which plays in the United States Hockey League, or in the NCAA. The tournament in Plano and Frisco, Texas, is a chance to judge more apples to apples, especially when Canadian and European prospects faced a taller task playing against grown men this season.

“You see some of these guys get knocked off the puck as they’re trying to go to the net when they come out of the corner,” Yannetti said. “They’re playing against a 30-year-old ex-NHL pro. Now you want to see, OK, they’re getting to go against the U.S. 18-year-old D or a Canada 18-year-old D, is he going to get knocked off the puck now? Is it the fact that he wasn’t strong enough in the Swedish League or is it the fact that he’s not competitive enough?”

Kekalainen, whose Blue Jackets have three first-round draft picks, will be there watching and trying to evaluate the tournament like in any other year.

“You watch the games, you want to make sure that, since you know that this is your only chance to see some of the guys closely, that you’re going to focus as well as you can, and then you probably back it up by watching that same game again on video if you miss something,” he said. “That’s the message that we’re going to have with our scouting staff.”

Players in the tournament know the lights are brighter this time around. Many played without scouts in the stands all season — those who were lucky enough to play at all.

“It’s hugely important for not just me but everybody, but especially the guys in Ontario. They haven’t had a chance to play yet, so I'm sure they're looking forward to it,” said projected first-round pick Corson Ceulemans, who played in only eight games in the Alberta Junior Hockey League this season. “It’s kind of the main studying point for this year, so it’s big.”

Yannetti wants to make sure the under-18s aren't too big an emphasis into the draft prep process, more than a decade after overvaluing a rough tournament by Brayden McNabb, who slipped to the third round of the 2009 draft. The Kings regretted their mistake and traded for McNabb five years later.

Yannetti and his staff plan to go into the tournament with a checklist of what to look for and and focus on given the importance of seeing players in person.