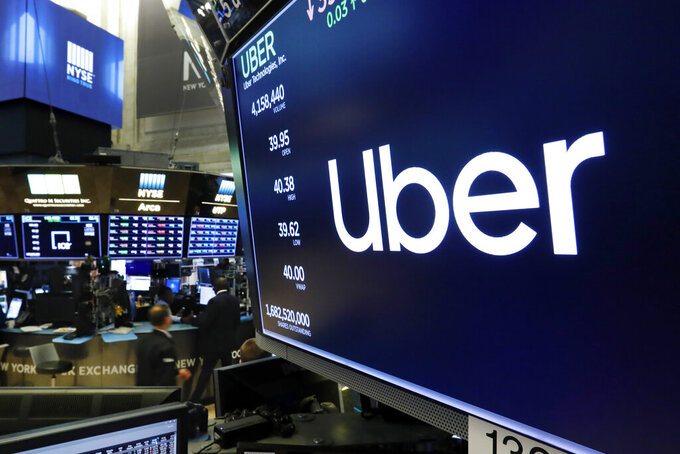 FILE - The logo for Uber appears above a trading post on the floor of the New York Stock Exchange, Thursday, May 30, 2019. Uber has reported that it whittled its losses at the end of a topsy-turvy year. In 2020, the ride-hailing service was forced to rely more heavily on its food-delivery service. That's because the pandemic dramatically reduced the number of people willing to hop into a car driven by a stranger. The fourth-quarter results announced Wednesday, Feb. 10, 2021 drew a picture of a company making strides in its attempt to recover from a staggering blow delivered last March. (AP Photo/Richard Drew, file)

SAN RAMON, Calif. (AP) — Uber’s whittled its losses at the end of a topsy-turvy year that forced the ride-hailing service to rely more heavily on its food-delivery business after the pandemic dramatically reduced the number of people willing to hop into a car driven by a stranger.

The fourth-quarter results announced Wednesday drew a picture of a company making strides in its attempt to recover from a staggering blow delivered last March, when efforts to contain the novel coronavirus shut down much of the economy and upended its ride-hailing service.

The upheaval accelerated Uber CEO Dara Khosrowshahi’s plans to expand the company’s food-delivery operation as part of an effort to build a more versatile transportation service. Those efforts, which included a $2.65 billion acquisition of Postmates last year, have enabled the food-delivery service to bring in nearly as much revenue Uber's ride-hailing business.

Uber is poised to expand even further beyond transporting people with its recent $1.1 billion deal for alcohol delivery service Drizly.

But analysts believe Uber’s pioneering ride-hailing service will also eventually bounce back as more people are vaccinated against COVID-19. Those predictions, coupled with the success of the food-delivery expansion, is the main reason Uber’s stock price has recently been hovering at its all-time high, more than quadrupling from its lows reached nearly 11 months ago during the early stages of the pandemic.

Uber’s shares dipped by about 3% in Wednesday's extended trading after the quarterly numbers came out. The decline may have reflected mild disappointment with quarterly revenue that fell slightly below the estimates of analysts polled by FactSet.

“We’re cautiously optimistic that this progress will continue and, in fact, accelerate over the next quarters," Khosrowshahi told analysts in a conference call. He also predicted that Uber's losses may evaporate by the end of this year.

In a research note, Wedbush Securites analyst Daniel Ives touted Uber as “a poster child" for a post-pandemic comeback.

For now, Uber still remains a long way from turning a profit — a goal that has eluded the San Francisco company since its founding more than a decade ago.

Uber lost $968 million, or 54 cents per share, in the October-December period, narrowing from a loss of nearly $1.1 billion, or 64 cents per share, at the same time in the prior year. The latest loss also marked an improvement from the quarters earlier in the pandemic.

Revenue for the past quarter decreased 16% from the previous year to $3.17 billion.

The company’s ride-hailing service brought in revenue of $1.48 billion in the quarter, a 52% drop from the prior year. Meanwhile, revenue in Uber's food-delivery service more than tripled from the previous year to $1.37 billion.

Uber probably would have been in an even deeper hole if it hadn’t been able to join forces with rival Lyft and a few other mobile app services to win an exemption from a California law that would have required it to classify its drivers in its biggest markets as full-fledged employees with a wide range of costly benefits, instead of as independent contractors.

To gain the exemption from the California law, Uber and its allies spent more than $200 million on a ballot measure that passed with 58% approval in November. The California Supreme Court refused to hear a legal challenge to the ballot measure earlier this month.