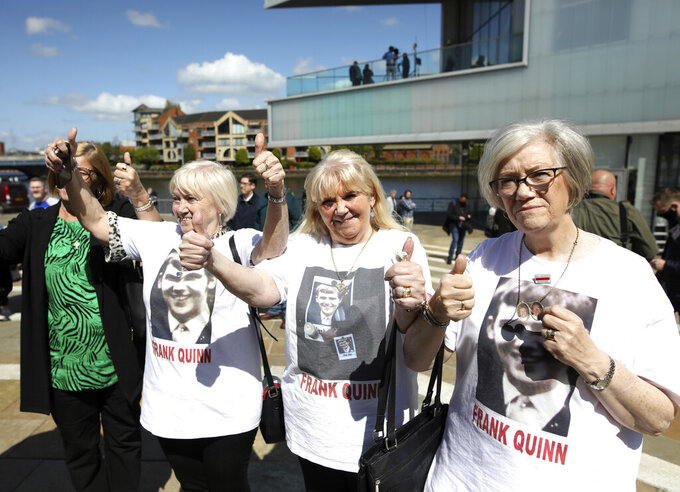 FILE - In this Tuesday May 11, 2021 file photo, family members of Frank Quinn react after the inquest in Belfast, Northern Ireland. U.K. government minister, Northern Ireland Secretary Brandon Lewis, stood before lawmakers on Thursday May 13, 2021, and formally apologized for the killing of 10 civilians during unrest in Belfast half a century ago, as Britain and Northern Ireland struggle to come to terms with the events of the past. (AP Photo/Peter Morrison, File)

LONDON (AP) — The families of 10 civilians killed during a British military operation in Belfast half a century ago sharply criticized Prime Minister Boris Johnson on Thursday after he sent a member of his Cabinet to Parliament to apologize for the deaths, instead of doing so himself.

Their outrage came after Northern Ireland Secretary Brandon Lewis told the House of Commons that the government “profoundly regrets and is truly sorry’’ for the deaths in the Ballymurphy area of west Belfast in 1971.

Lewis spoke two days after a coroner's court ruled that the victims were “entirely innocent." Johnson sent a letter of apology to the victims' families, but he hasn't spoken publicly on the matter.

“Our loved ones were murdered by the state,'' said John Teggart, whose father was killed at Ballymurphy. “The head of state is Boris Johnson so he should be standing (in) Parliament, speaking to us, speaking to the world, that is the way you do things. This government has acted disgracefully.''

High Court Justice Siobhan Keegan ruled Tuesday that the nine men and one woman killed in Ballymurphy were innocent victims who weren’t engaged in paramilitary activity at the time they were shot. The dead included a mother of eight and a Catholic priest who was waving a white handkerchief as a sign of peace while assisting a wounded man.

On Thursday, Lewis told lawmakers that families of the victims shouldn't have had to wait 50 years for justice.

Johnson delivered his apology in a letter to the families, declaring that the “duty of the state is to hold itself to the highest standard, and that requires us to recognize the hurt and agony caused when we fall short of those standards.''

The coroner’s verdict comes as veterans’ groups pressure the British government to block the prosecution of former soldiers, many now in their 70s and 80s, for their actions during the violence in Northern Ireland known as The Troubles. In recent weeks the six-county region that is part of the U.K. has been rocked by violent protests fueled by anger over the perceived unfair enforcement of coronavirus restrictions and concerns about Britain’s departure from the European Union.

More than 3,000 people died during three decades of conflict between mostly Catholic supporters of unification with the Republic of Ireland and mostly Protestant backers of continued links with the United Kingdom.

The killings in Ballymurphy occurred over three days in August 1971 as the British Army sought to implement a new government policy that allowed for the arrest and internment without trial of suspected militants. Violence flared when protesters confronted soldiers who had moved into the largely Catholic area to arrest suspected members of the Irish Republican Army.

Keegan found that soldiers used disproportionate force against the victims and violated rules of engagement in force at the time. Authorities failed to adequately investigate the deaths immediately after they occurred, she said.

Nine of the victims were killed by soldiers, though there wasn't enough evidence to determine who fired the shots that killed the tenth, the court ruled.

The victims' families had fought for decades for a new inquiry to clear the names of their loved ones after earlier inquests proved inconclusive, fueling suggestions that the victims were somehow responsible for the shootings.

Johnson's failure to appear before Parliament is in contrast to the actions of former Prime Minister David Cameron after a public inquiry found that British troops were responsible for the deaths of 13 protesters in 1972.

Cameron gave a public statement in the Commons, which was beamed to thousands gathered in a public square in Londonderry — also known as Derry — to admit that British troops were fully at fault for what is now known as Bloody Sunday. Many locals, long distrustful of British leaders, wept at the act of contrition.

Teggart insisted that he expected an apology from Johnson. “We’ll not be rushing him, just whenever he is ready, he can come and speak to the families," he said.