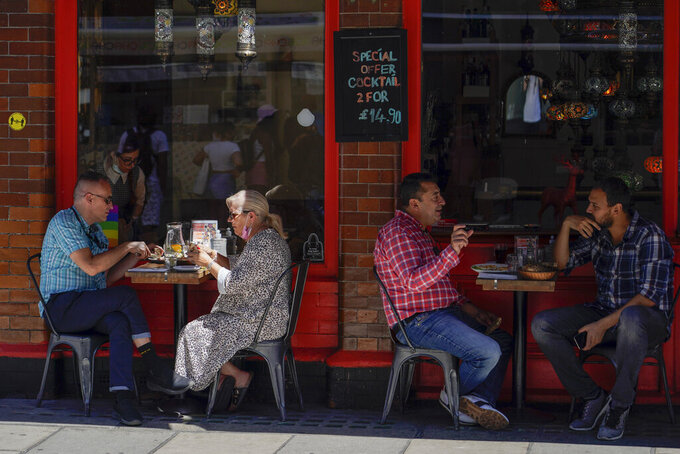 FILE - In this Monday, June 14, 2021 file photo, people sit at outdoor tables at a restaurant in Soho, in London. Retail sales in Britain slipped back in May as people ventured out to spend money at restaurants and pubs following the easing of coronavirus lockdown restrictions, official figures showed Friday, June 18. (AP Photo/Alberto Pezzali)

LONDON (AP) — Retail sales in Britain slipped back in May as people ventured out to spend money at restaurants and pubs following the easing of coronavirus lockdown restrictions, official figures showed Friday.

The Office of National Statistics found that retail sales during May were 1.4% lower than the previous month, when they surged 9.2% after shops selling nonessential items were allowed to reopen after a months-long shutdown.

It said the biggest downward contribution came from food sales, which fell 5.7% as restrictions on the hospitality sector were eased further to allow people to meet up inside. Pubs and restaurants previously were allowed to serve customers only outdoors.

Analysts said the monthly decline does not represent the start of a slowdown in the British recovery from its biggest economic contraction in more than 300 years. In 2020, the British economy contracted around 10% as a result of pandemic restrictions.

“Retail sales, unlike some other parts of the economy, have been pretty quick to get back to where they were before the virus,” said James Smith, an economist at financial firm ING.

The statistics agency said retail sales were 9.1% higher than in February 2020 before the pandemic hit the economy.

Smith thinks that the rapid rollout of vaccines in the U.K. has helped shore up confidence in the economy, with people more inclined to venture out and spend money they have saved during the pandemic while working at home.

“We’ve seen consumer confidence has really soared,” he said. “People feel safe to go out and do things again .... that’s been a real positive and you can see that in retail sales numbers.”

Despite the monthly decline in food sales, food retailers have enjoyed bumper sales during the pandemic. Tesco, Britain's biggest supermarket chain, reported first quarter figures Friday that showed a 1% increase in same-store sales. Though seemingly low, that increase compares with the same period last year, when sales were booming as the U.K. first went into lockdown.

Rate-setters at the Bank of England will be digesting the recent economic news ahead of their meeting next week. The consensus in the markets is that the bank will keep its main interest rate unchanged at the record low of 0.1% and maintain its current stimulus program.

However, the balance is getting more nuanced as the recovery takes root, not least because the annual rate of inflation has risen to 2.1%, above the bank's target of 2%.