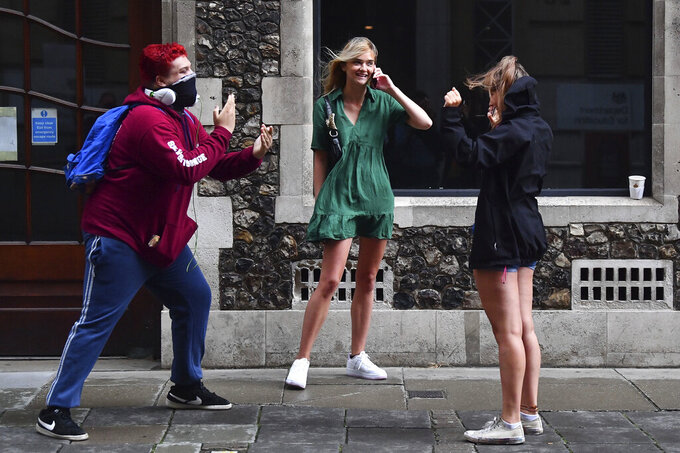 Students outside the Department for Education building in London, react to news of the policy U-turn on the system for awarding A-level and GCSE grades, Monday Aug. 7, 2020. Exam-grading policy was set because no exams were possible because of the coronavirus. The British government has scrapped an exam-grading policy that was set to deprive thousands of 18-year-olds, especially the more disadvantaged, of their university places. (Dominic Lipinski/PA via AP) 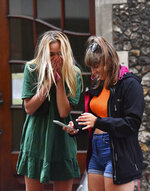 LONDON (AP) — In a U-turn after days of criticism, the British government on Monday scrapped an exam-grading policy that was set to deprive thousands of graduating high school students — especially more disadvantaged ones — of places at universities.

Roger Taylor, chairman of U.K. exam regulator Ofqual, said the use of an algorithm to predict the results of exams that were canceled by the coronavirus pandemic had caused “real anguish and damaged public confidence.”

“It has not been an acceptable experience for young people,” he said. "I would like to say sorry."

Universities in the U.K. offer final-year high school students places based on grades predicted by their teachers. Admission is contingent on the results of final exams, known as A Levels.

This year, with schools largely shut since March and no exams, education authorities in England ran the predicted grades through an algorithm, intended to standardize results, that compared them with schools’ past performance. That meant high-achieving students at under-performing schools, many in deprived areas, saw their marks downgraded, while students at above-average schools kept their predicted grades.

Hundreds of students have held protests, calling the results an injustice, and lawmakers were inundated with complaints from angry parents.

Kay Mountfield, head teacher at a school in Marlow, west of London, said 85% of her students had received lower than predicted grades.

“Seventy of my students have not had their first choice of university,” she said. “Normally that would be about five, or 10 maybe, students.”

The reversal means students in England will receive the grades estimated by their teachers, unless the ones generated by the algorithm are higher. Education authorities in Scotland, Wales and Northern Ireland have made similar moves.

The same policy will apply to GCSEs, the exams taken by 16-year-old students. Those results are due on Thursday.

The U-turn is an embarrassment for Prime Minister Boris Johnson's government, but had come to appear inevitable as criticism of the policy spread, even within the ranks of the governing Conservative Party.

“This group of young people have lost out on so much already; we must ensure that bright, capable students can progress on their next step,” Paymaster General Penny Mordaunt said before Monday's announcement.

Defense Minister Johnny Mercer said there were “clear injustices” in the system.

In Scotland, authorities quickly reversed course after a similar fiasco last week, saying students would get their predicted grades. That increased pressure on Johnson to do the same for England.

Johnson, who is on vacation, chaired a call on the crisis Monday with Education Secretary Gavin Williamson and senior officials.

Williamson had previously insisted that there would be “no U-turn,” though he said students who had been downgraded could appeal or retake the exams.

But on Monday he acknowledged that “the process of allocating grades has resulted in more significant inconsistencies than can be resolved through an appeals process.”

“I am sorry for the distress this has caused young people and their parents but hope this announcement will now provide the certainty and reassurance they deserve,” he said.

The announcement did not end the uncertainty for all students, however. Many are scrambling to get in touch with universities to see whether they can now get in.

“I’ve been on hold for an hour, said Testify Anyahamiwe, who hopes to study medicine at Queen Mary University of London.

“Although I'm happy that my grades are definitely going to be higher than what they gave me, I still don't know if I'm going to get my uni place," she said.

Amy Kirkham, from High Wycombe, northwest of London, missed the grades needed to secure her place studying economics at Cambridge University when the algorithm downgraded her in two subjects.

Now she has the required marks, but doesn't know whether there is space for her. If not, she might wait until next year to start her university career.

“It’s just putting my life on hold," she said.

To compound the pain, Kirkham's twin sister got into the also-prestigious Oxford University despite having her marks initially downgraded, too.

“It was always a shared dream that I’d be going to Cambridge this year and she would be going to Oxford,” Kirkham said. "She hasn’t felt like celebrating because I’ve had to go through this pain of waiting to know whether I’ve got in or not. So it’s been really frustrating and hard on my family.”