UK urged to ax 'rash' easing of restrictions over Christmas 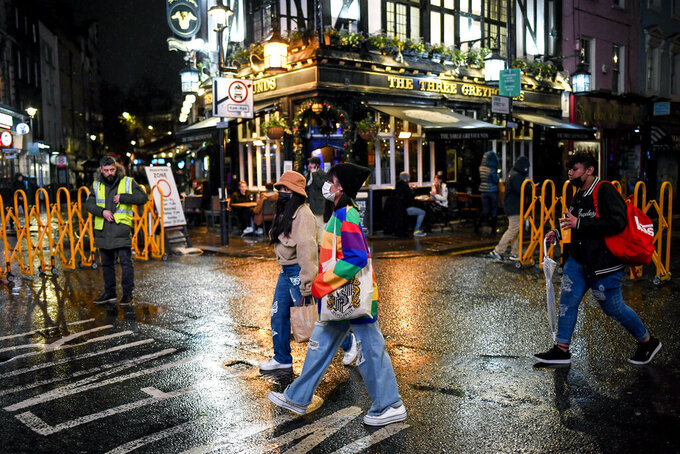 People wearing face masks to protect against coronavirus as they walk past a pub in Soho, London, Monday, Dec. 14, 2020. London and its surrounding areas will be placed under Britain's highest level of coronavirus restrictions beginning Wednesday as infections rise rapidly in the capital, the health secretary said Monday, adding that a new variant of the virus may be to blame for the spread. (AP Photo/Alberto Pezzali)

LONDON (AP) — The four nations of the United Kingdom faced mounting calls Tuesday to scrap. or at least limit, a planned easing of coronavirus restrictions over Christmas following a spike in new infections.

Talks between leaders from across the U.K. over the planned easing are set to resume on Wednesday, a day that will see London and some surrounding areas join other parts of Britain in facing much more stringent restrictions.

Michael Gove, one of the most senior members in the British government, which sets public health policy for England, held talks Tuesday with leaders from Scotland, Wales and Northern Ireland. Though no change of plan was announced, further discussions are set to take place on Wednesday.

The pressure on them to ditch the scheduled five-day easing — which would allow three households to form a so-called bubble in and out of the home — ratcheted higher through the day, with concerns voiced from across the political spectrum.

Perhaps loudest was a joint editorial from two of the country's leading medical journals. In only their second joint editorial in their more than 100-year histories, the British Medical Journal and the Health Service Journal urged a rethink of a “rash” decision that they said will “cost many lives.”

“We are publishing it because we believe the government is about to blunder into another major error,” they said.

Britain's Conservative government, along with the devolved administrations, agreed last month to allow a maximum of three households to mix between Dec. 23 and Dec. 27, regardless of what local restrictions are in place.

But with new infections rising in many parts of the country, there are growing concerns that the government's Christmas relaxation will see a further escalation in infections and deaths and put too much pressure on the already-stressed National Health Service.

Keir Starmer, leader of the opposition Labour Party, was one who called on Prime Minister Boris Johnson to call an emergency meeting to review the decision.

“I understand that people want to spend time with their families after this awful year, but the situation has clearly taken a turn for the worse since the decision about Christmas was taken," he said.

Any potential easing over Christmas contrasts with measures being taken by other European nations such as Germany and the Netherlands, which have announced sweeping new restrictions for the holidays.

When the Christmas easing was first announced last month, Johnson was careful to stress that households should be "jolly careful, especially with elderly relatives.”

However, that easing announcement was predicated on an assumption that new cases would be on a downward trajectory.

But new infections have been increasing again, with another 18,450 announced on Tuesday. Though down a couple of thousand from Monday's tally, figures over the past few days have been consistently higher than those recorded in the preceding two weeks.

The resurgence has come despite a four-week national lockdown in England that only ended in early December, and other stringent measures taken in Scotland, Wales and Northern Ireland.

In light of the rising number of cases, London on Wednesday will join other major cities in England, including Birmingham and Manchester, in the highest level of restrictions — Tier 3 — in which pubs and restaurants are closed apart for takeouts and deliveries. People in Tier 3 areas — which will soon include a majority of England's population — are not allowed to meet socially in private or at most outdoor public venues with anybody they do not live with.

London Mayor Sadiq Khan was among those calling for a rethink.

“The concern is this — the rules have been relaxed for five days, allowing household mixing for up to three different households and inevitably when people are in their own households, they tend to be less vigilant,” he told BBC Radio.