UN appeals for $5.5 billion to avert famine for 34 million 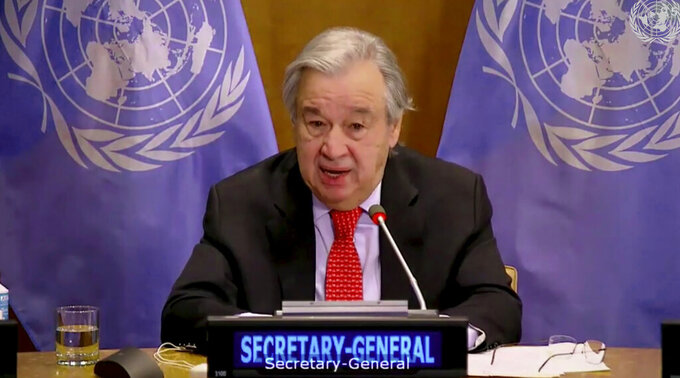 UNITED NATIONS (AP) — Secretary-General Antonio Guterres made an urgent appeal Thursday for $5.5 billion to prevent a “catastrophe” for 34 million people in over three dozen countries who are just one step away from famine driven by conflict -- and the World Food Program chief warned that 270 million people are facing “a hunger crisis” this year.

Guterres told a high-level U.N. Security Council meeting organized by the U.S. that more than 88 million people were suffering from “acute hunger” at the end of 2020 due to conflict and instability -- a 20 percent increase in one year -- and “projections for 2021 point to a continuation of this frightening trend.”

World Food Program Executive Director David Beasley said leaders responded to his warning to the council a year ago that the world stood on the brink of the COVID-19 pandemic and a hunger pandemic that could push the number of people “marching to the brink of starvation” from 135 million to 270 million and lead to “famines of biblical proportions” in over three dozen countries.

Unfortunately, Beasley said, “the concerns of 2020 are now a reality for 2021" because of new waves of COVID-19 and economies not yet surging back to normal.

“So, today, I must warn you that we are once again sliding toward the brink of the abyss,” he said. “Now, 270 million people are facing a hunger crisis.”

Both Guterres and Beasley stressed that the hunger crisis and looming famines are primarily driven by conflict and are entirely preventable.

“Climate shocks and the COVID-19 pandemic are adding fuel to the flames,” the U.N. secretary-general said.

He warned that “without immediate action, millions of people will reach the brink of extreme hunger and death,” pointing to projections showing that hunger crises are “escalating and spreading across the Sahel and the Horn of Africa, and accelerating in South Sudan, Yemen and Afghanistan.”

In some countries, Guterres said, “famine is already here” and “people are dying from hunger and suffering critical rates of malnutrition.”

“Parts of Yemen, South Sudan and Burkina Faso are in the grip of famine or conditions akin to famine,” he said. “More than 150,000 people are at risk of starving.”

Five years of conflict in Yemen have displaced 4 million people and left many “facing a death sentence as widespread hunger stalks their nation,” Guterres said. “Around half of all children under five -- 2.3 million -- are projected to face acute malnutrition in 2021. Some 16 million people face food insecurity.”

WFP’s Beasley, who was in Yemen two days ago, called it “hell on earth in many places” and warned that “we are heading straight toward the biggest famine in modern history.”

At Al Sabeen children’s hospital, the best in the capital Sanaa, he said children were “skin and bones, and dying with entirely preventable or treatable illnesses.” The hospital has 25 beds and Beasley said he asked a doctor about children that were turned away. “She replied, `They go home to die.’"

Guterres and Beasley cited other countries with growing hunger.

Beasley, who visited Congo last week, said “this year it is set to become the world’s largest hunger emergency with 19.6 million people facing crisis, emergency or catastrophic levels of food insecurity, up from 15.6 million people a year ago.”

Ten years after South Sudan declared independence, Guterres said 60% of the population is increasingly hungry, with chronic sporadic violence, extreme weather and the economic impact of COVID-19 pushing more than 7 million people into acute food insecurity. Food prices are so high, he said, that “just one plate of rice and beans costs more than 180% of the average daily salary -- the equivalent of about $400 here in New York.”

Beasley, who visited Western Pibor in South Sudan in early February, said in recent days he heard that “mothers are resorting to feeding their children with the skin of dead animals -- or even mud,” calling the “famine-like conditions" desperate and and appealing for “urgent action.”

The U.N. chief said he had one simple message: “if you don’t feed people, you feed conflict.”

“We need to tackle both hunger and conflict if we are to solve either,” Guterres said.

He called on donors for $5.5 billion for “the more than 34 million people who already face emergency levels of acute food insecurity.”

The secretary-general urged Security Council members to use their “privileged position to do everything in your power to end violence, negotiate peace, and alleviate the hunger and suffering that afflict so many millions of people around the world.”

Beasley echoed the appeals, urging donors “to open your hearts, show compassion, and to give and give generously.” And he urged leaders and parties involved in conflict “to invest in peace so that in the future desperate families are not forced to the brink of survival by the bullet and the bomb.”

U.S. Ambassador Linda Thomas-Greenfield said “acute malnutrition can trigger other risks, like gender-based violence or the exploitation and abuse of children."

She recalled the 2018 Security Council resolution calling for “bad actors" who use starvation as a weapon of war to be investigated and held accountable and asked asked Secretary-General Guterres to increase reporting “so that no more innocent civilians starve to death.”

Gabriela Bucher, executive director of the British-based aid organization Oxfam International, told the council the failure to address hunger before the COVID-19 crisis “and the rampant inequality and climate change which has so often triggered conflict, has left us scrambling to avert famine across the globe.”

“Let us all be clear: Starvation is a symptom of a deeper problem,” she said. “The growing crisis of starvation is taking place in a world where eight of the biggest food and drink companies paid out over $18 billion to shareholders last year.”

“Those dividends alone are more than three times what we are asking for in aid today to avert catastrophe,” Bucher said. “There is not a lack of food, there is a lack of equality.”