UN chief: World is living in `shadow of nuclear catastrophe' 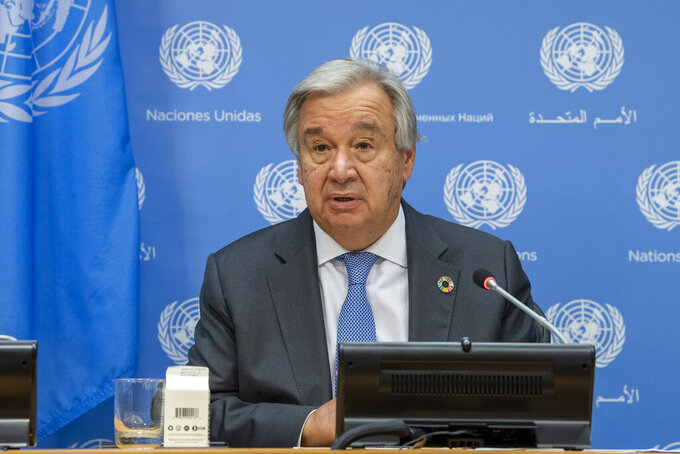 In this photo provided by the United Nations, Secretary-General Antonio Guterres briefs reporters during the 75th session of the United Nations General Assembly, Tuesday, Sept. 29, 2020, at U.N. headquarters in New York. (Rick Bajornas/UN Photo via AP)

UNITED NATIONS (AP) — U.N. Secretary-General Antonio Guterres warned Friday that the world is living “in the shadow of nuclear catastrophe,” fueled by growing distrust and tensions between the nuclear powers.

The U.N. chief told a high-level meeting to commemorate the recent International Day for Total Elimination of Nuclear Weapons that progress on ridding the world of nuclear weapons “has stalled and is at risk of backsliding." And he said strains between countries that possess nuclear weapons “have increased nuclear risks.”

As examples, Guterres has expressed deep concern at the escalating disputes between the Trump administration and China. Relations between the U.S. and Russia are at a low point. Nuclear-armed India and Pakistan are feuding over Kashmir, and India just had a border skirmish with China. And North Korea boasts about its nuclear weapons.

Without naming any countries, Guterres said programs to modernize nuclear arsenals “threaten a qualitative nuclear arms race,” not to increase the number of weapons but to make them “faster, stealthier and more accurate.”

Guterres also pointed to the only treaty constraining the size of the world’s largest nuclear arsenals -- the New Strategic Arms Reduction Treaty between the United States and Russia -- which is set to expire next year.

“It is imperative” that the two countries extend it without delay for the maximum five years, he said, waring that without a treaty there is an “alarming possibility of a return to unconstrained strategic competition.”

The secretary-general said the nuclear non-proliferation treaty or NPT, which marks its 50th anniversary this year, remains the cornerstone of nuclear disarmament and efforts to prevent the spread of nuclear weapons.

The five-year review of its implementation was postponed because of the COVID-19 pandemic until next year and Guterres urged its 191 parties to use the extra time to strengthen the treaty, including making “tangible progress towards the elimination of nuclear weapons."

Guterres said he also looks forward to the entry into force of the first-ever treaty to ban nuclear weapons, which was adopted in July 2017 by 122 countries. Once it has 50 ratifications, the treaty will enter force in 90 days, and with Malaysia’s ratification on Sept. 30 it now has 46.

At Friday’s high-level meeting, 103 of the 193 U.N. member nations were scheduled to speak for two minutes each. But many spoke longer so only 79 delivered addresses, and the U.N. said it would post the rest.

Of the major nuclear powers, Russia and China were on the speakers list but didn't get to speak. The United States Britain and France skipped the meeting. So did North Korea and Israel, which is widely reported to have a nuclear arsenal but has never admitted it publicly. India and Pakistan were scheduled to speak, but only India got to deliver remarks.

Many speakers recalled that the meeting took place 75 years after the United States dropped nuclear bombs on Hiroshima and Nagasaki, which killed 210,000 people and sped the end of World War II.

Iran’s Foreign Minister Mohammad Javad Zarif, whose country is still part of a 2015 agreement with Russia, China, Britain, France and Germany aimed at preventing the Islamic Republic from obtaining nuclear weapon, said the meeting “provides a unique opportunity to mobilize the world to liberate humanity from the nuclear nightmare.”

In brief prerecorded remarks, Zarif accused the United States of “developing new nuclear weapons and recklessly lowering the threshold of their deployment." He said the U.S. has also caused “immense damage to the NPT by unlawfully withdrawing from the 2015 nuclear deal with Iran and the 1987 intermediate-range Nuclear Forces Treaty with Russia on missile.

Zarif also lashed out at U.S. support for Israel, “the sole possessor of nuclear arsenal in our region.” He demanded that the international community “compel Israel -- which has aggression in its very DNA -- to promptly accede to the NPT and destroy its nuclear arsenal” and submit to “the most intrusive inspection regime.”

The Iranian minister also called on the General Assembly “to declare as a binding norm of international law that a nuclear war cannot be won -- and must never be fought,” and to develop a concrete program for “time-bound nuclear disarmament.”

“Just imagine if the billions wasted on instruments of global annihilation were allocated to help fund the fight against COVID-19,” Zarif said.

Swedish Foreign Minister Ann Linde said in spite of the “catastrophic humanitarian consequences” of the atomic bombings, “the nuclear threat is as present as ever and multilateralism is under severe pressure.”

“Polarization and a lack of trust” are “a dangerous mix, one which we cannot afford to ignore,” she said.

Linde called on the U.S. and Russia to promptly extend New START and welcomed recent discussions “on a broader, follow-on agreement, which could also include China.”

Sweden has launched the Stockholm Initiative on Nuclear Disarmament with 15 non-nuclear nations aimed at building “political support for a result-oriented disarmament agenda within the NPT framework,” she said, urging other countries to join the effort.

Indonesia’s Foreign Minister Retno Marsudi said “no significant progress” has been made by nuclear weapon states in reducing their arsenals, and their current modernization efforts have resulted in “the ever-enlarging trust deficit among countries.”

She called for enforcement of the NPT, strengthening disarmament, the early entry into force of the nuclear test ban treaty, and for all nuclear weapon states to become parties to nuclear weapons free zones.

“Maintaining nuclear weapons, is clearly, a zero-sum situation, while total abolishment of such weapons, will ensure that humanity prevails,” Marsudi said.