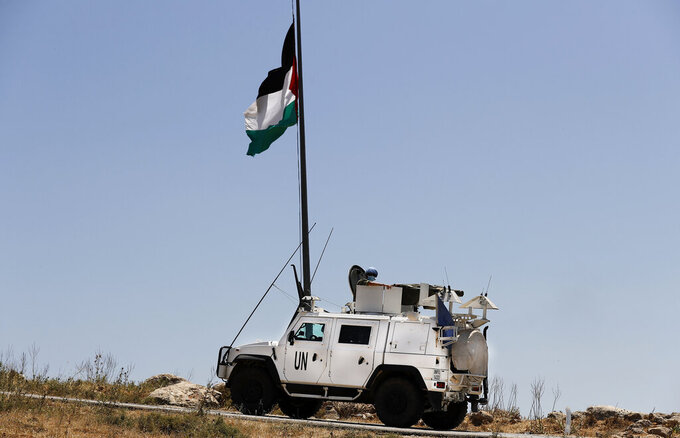 Spanish U.N peacekeepers pass under a Palestinian flag as they patrol on the Lebanese side of the Lebanese-Israeli border in the southern village of Kfar Kila, Lebanon, Saturday, May 15, 2021. On Israel's northern border with Lebanon, Israeli troops opened fire on Friday when a group of Lebanese and Palestinian protesters on the other side cut through the border fence and briefly crossed. (AP Photo/Hussein Malla)

UNITED NATIONS (AP) — The Security Council condemned killings and attacks against U.N. peacekeepers in the strongest terms Monday and called for prompt prosecution of those responsible.

The council underscored the critical importance of safety and security for the U.N.’s more than 90,000 peacekeepers serving in 12 missions from Congo, South Sudan and Mali to the Middle East and India-Pakistan.

It said Secretary-General Antonio Guterres and countries contributing troops and police to peacekeeping operations should work together to ensure that peacekeepers have adequate resources and are equipped and trained to mitigate threats, including from landmines, explosive remnants of war and improvised explosive devices.

The Chinese-drafted presidential statement was approved by all 15 council members at an open meeting where U.N. peacekeeping chief Jean-Pierre Lacroix said peacekeeping missions operate “in complex environments where they face an increasing number of attacks against their personnel by hostile actors.”

Since Jan. 1, Lacroix said, 15 peacekeepers lost their lives “due to malicious acts.”

“In addition to hostile environments and direct attacks, issues related to peacekeeper safety, such as vehicle accidents and illnesses, are also causing fatalities, and can significantly affect the ability of peacekeepers to deliver on their mandated tasks,” Lacroix said.

“In 2020, for example, 13 peacekeepers lost their lives to violent acts, compared to 15 due to accidents and 81 due to illness," he said. “This has, of course, been compounded by the COVID-19 pandemic.”

Lacroix said technology has enhanced the preparedness and capabilities of peacekeepers, including early warning systems and drones.

The U.N. has also made progress supporting countries that host peacekeeping forces in their efforts to bring perpetrators of crimes against peacekeepers to justice. he said. As examples, six people were convicted in Central African Republic in early 2020 and in March 2021 one person was convicted and eight others were convicted and sentenced in absentia, he said.

But Lacroix said, “Despite the progress made, many factors continue to impede the safety and security of our peacekeepers on the ground.”

He called for the deployment of uniformed peacekeepers “without caveats” on their activities that undermine the safety and security of other peacekeepers “and the performance of our operations.”