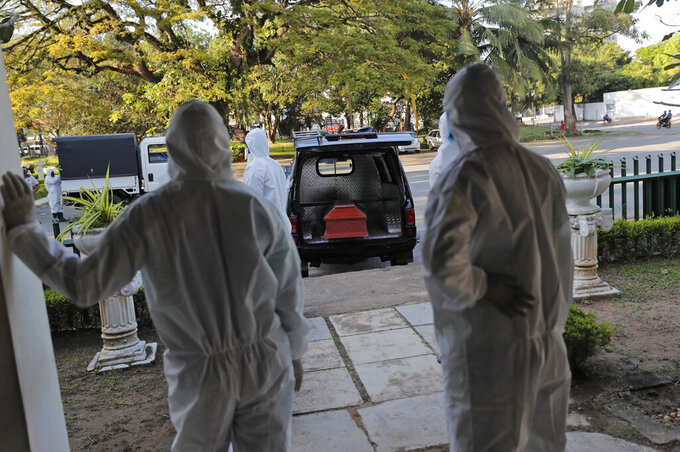 Sri Lankan municipal workers wait as they prepare to cremate a body of a COVID-19 victim at a cemetery in Colombo, Sri Lanka, Friday, Jan. 22, 2021. Sri Lanka on Friday approved the Oxford-AstraZeneca vaccine for COVID-19 amid warnings from doctors that front-line health workers should be quickly inoculated to stop the system from collapsing. (AP Photo/Eranga Jayawardena)

COLOMBO, Sri Lanka (AP) — A group of U.N experts has criticized Sri Lanka's requirement that those who die of COVID-19 be cremated, even it goes against a family's religious beliefs, and warned that decisions based on “discrimination and aggressive nationalism” could incite hatred and violence.

The experts, who are part of the Special Procedures of the U.N Human Rights Council, said in a statement Monday that rule amounts to a human rights violation.

“We deplore the implementation of such public health decisions based on discrimination, aggressive nationalism and ethnocentrism amounting to persecution of Muslims and other minorities in the country,” the experts said. “Such hostility against the minorities exacerbates existing prejudices, intercommunal tensions, and religious intolerance, sowing fear and distrust while inciting further hatred and violence."

Sri Lanka introduced the rule in March, saying there was a risk that bodies with the coronavirus could contaminate the ground water if they were buried. The WHO as well as Sri Lankan medical groups have said that burial of those who died of COVID-19 is safe.

More than 70% of Sri Lankans are Buddhist, a faith in which cremation is common. But 9% of people in Sri Lanka are Muslims and many say cremation goes against their religious beliefs.

“While we must be alert to the serious public health challenges posed by the pandemic, COVID-19 measures must respect and protect the dignity of the dead, their cultural and religious traditions or beliefs, and their families throughout,” the experts said.

After Muslims protested the new rule, the government appointed a committee to look into the matter, but it also said cremation was the best option. The country's top court then rejected petitions seeking to overturn the rule.

The furor over the cremation requirement comes amid increasing anti-Muslim sentiment in this Indian Ocean island nation. Muslim-owned shops and homes were attacked following 2019 Easter Sunday bomb attacks on churches and hotels by a Muslim group pledging allegiance to the Islamic State group.

Later that year, President Gotabaya Rajapaksa’s came to power with a promise to protect the interests of the country's ethnic Sinhalese Buddhist majority.

In response the U.N. statement, government spokesman Keheliya Rambukwella said the cremation rule was not meant to discriminate against any group.

“They can’t point the finger at us and say that. We reject it. We do things only on expert advice and we can’t take ad-hoc decisions,” he said.

Sri Lanka has seen 283 deaths from the coronavirus out of more than 59,000 reported infections.