UN tribunal for Lebanon may fold due to funding crisis 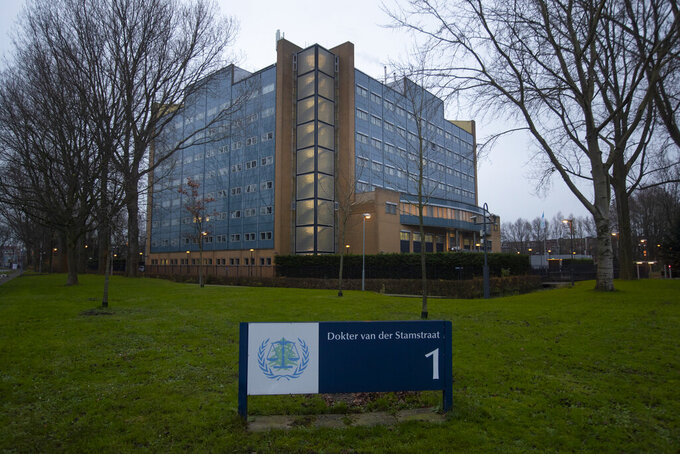 FILE - In this Friday Dec. 11, 2020, file photo, exterior view of the United Nations-backed Lebanon Tribunal where the court handed down it's sentencing on Salim Jamil Ayyash, a member of the Hezbollah militant group who was convicted of involvement in the assassination of former Lebanese Prime Minister Rafik Hariri and 21 others 16 years ago, in Leidschendam, Netherlands. Ayyash is not in custody and is unlikely to serve any sentence. A U.N.-backed tribunal investigating the 2005 assassination of former Lebanese Prime Minister Rafik Hariri said Wednesday, June 2, 2021 it is facing a severe funding crisis and will not be able to operate beyond July without immediate assistance. (AP Photo/Peter Dejong, File)

BEIRUT (AP) — A U.N.-backed tribunal investigating the 2005 assassination of former Lebanese Prime Minister Rafik Hariri said Wednesday that it is facing a severe funding crisis and will not be able to operate beyond July without immediate assistance.

The announcement by the Special Tribunal for Lebanon came as the country is in the grips of an unprecedented economic crisis — a culmination of decades of widespread corruption and mismanagement.

Although the tribunal's verdict issued last August, 15 years after Hariri's killing, was disappointing for many Lebanese, ending its work would raise concerns in the tiny country where political killings have gone without punishment for decades.

Separately, some Lebanese are demanding an international investigation into the Aug. 4 blast at Beirut’s port that killed 211 people, injured more than 6,000 and damaged nearby neighborhoods.

The Netherlands-based said it has formally notified U.N. Secretary-General Antonio Guterres of its financial situation, “which will result in the Tribunal’s inability to complete its work if no contributions are forthcoming prior to the end of July.”

Guterres is “deeply concerned” over the tribunal’s financial difficulties and has appealed to U.N. member states, the international community and the General Assembly for funds, his spokesman said Wednesday.

The U.N. chief stresses that “continued financial support by the international community is vitally critical to ensuring justice for the victims in Lebanon,” said the spokesman, Stephane Dujarric.

According to the U.N., the tribunal received $15.5 million in March from Guterres' efforts, which helped pay about 75% percent of the Lebanese government’s 49% share for expenses. But the tribunal says it lacks money from donors who are to pay the other 51% of the budget.

The tribunal also said that given the challenging circumstances generated by the global COVID-19 pandemic and Lebanon's economic crisis, it had already reduced its budget by approximatively 37% for 2021, compared with the previous years.

Lebanon’s economic crisis began in late 2019 and has intensified in recent months. The World Bank said Tuesday the crisis is likely to rank as one of the worst the world has seen in more than 150 years, adding that the economy contracted 20.3% in 2020 and is expected to shrink 9.5% this year.

In March 2020, Lebanon defaulted on paying back its debt for the first time in its history as the local currency lost more than 85% of its value. Tens of thousands have lost their jobs while many others left the country seeking opportunities abroad. Nearly half the country’s 5 million people live in poverty.

“Despite taking significant cuts of staff and across the board reductions, without additional funding, the Tribunal will be forced to close its doors in the coming months,” said the tribunal's Registrar David Tolbert. He added that this will leave “important cases unfinished to the detriment of victims, the fight against impunity and the rule of law.”

The 2005 Valentine’s Day truck bombing on Beirut’s seafront that killed Hariri and 21 others sparked huge protests against Syria, which was widely seen as culpable. Damascus denied involvement but was forced to withdraw its troops from Lebanon after 29 years there.

The U.N. investigation into Hariri’s assassination was broadened to include 14 other Lebanese killings.

In December, the Netherlands-based tribunal sentenced Salim Ayyash, a member of the Hezbollah militant group, in absentia to life imprisonment for his involvement in Hariri’s assassination. Ayyash has never been arrested. Three other Hezbollah members tried with him were acquitted.