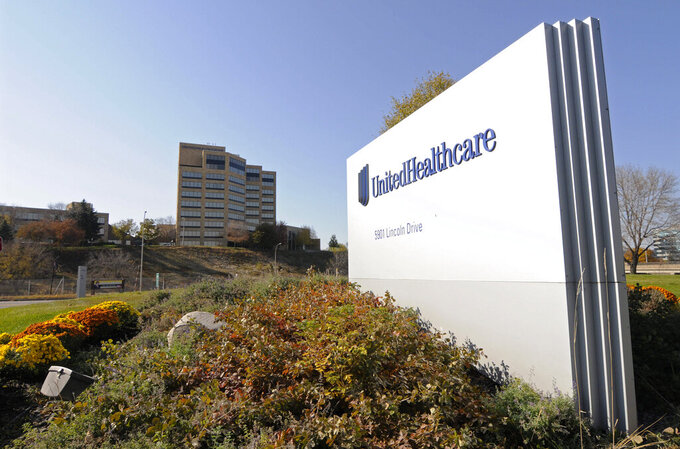 FILE - This Oct. 16, 2012, file photo, shows a portion of the UnitedHealth Group Inc.'s campus in Minnetonka, Minn. UnitedHealth profits jumped about 44% in the first quarter and the nation's largest health insurer boosted its outlook for the year. The company said Thursday, April 15, 2021, that the performance of its Optum division was particularly strong. (AP Photo/Jim Mone, File)

UnitedHealth's first-quarter profit jumped about 44%, and the nation's largest health insurer also hiked its 2021 outlook despite expecting more hits from the COVID-19 pandemic.

The company said Thursday that the performance of its Optum division was particularly strong.

The new range mostly tops the average analyst forecast of $18.19 per share, according to FactSet.

That projection continues to include a potential downside of $1.80 per share from the ongoing pandemic.

Patients began returning to doctors offices and scheduling more surgical procedures toward the end of last year after putting off medical care for months during the pandemic. That returned a bit of normality for UnitedHealth and other insurers, and it added more medical costs to their income statements.

UnitedHealth expects this trend to continue. Chief Financial Officer John Rex told analysts Thursday morning that they expect to feel most of COVID’s impact from that return of care in the second half of the year.

The company also said COVID-19 testing and treatment activity was greater than expected during the first quarter, but the flu season was well below average.

UnitedHealth is the first insurer to report earnings every quarter, and analysts see it as a bellwether for the sector.

The company brings in most of its revenue through its UnitedHealthcare insurance division. Enrollment there grew by about a million people to nearly 49.5 million since the end of last year.

UnitedHealth also has been stoking its Optum segment for growth. That business runs one of the nation’s largest pharmacy benefit managers as well as a growing number of clinics and urgent care and surgery centers.

Optum's operating earnings grew nearly 25%, to $2.6 billion during the quarter.

Overall, UnitedHealth Group Inc. posted quarterly earnings of $4.86 billion. That's up from $3.38 billion in last year's quarter, which had an extra day for adding medical costs.

Adjusted earnings totaled $5.31 per share, easily beating Wall Street's per-share expectations of $4.42, according to a survey by Zacks Investment Research.

The Minnetonka, Minnesota, company also reported that its revenue grew 9% to $70.2 billion, and that too topped projections.

UnitedHealth shares topped $390 to reach a new all-time high price shortly after markets opened Thursday. The stock was up about 3% by mid-morning. The Dow Jones Industrial Average, of which UnitedHealth is a component, rose less than 1% by comparison.

A portion of this story was generated by Automated Insights (http://automatedinsights.com/ap) using data from Zacks Investment Research. Access a Zacks stock report on UNH at https://www.zacks.com/ap/UNH