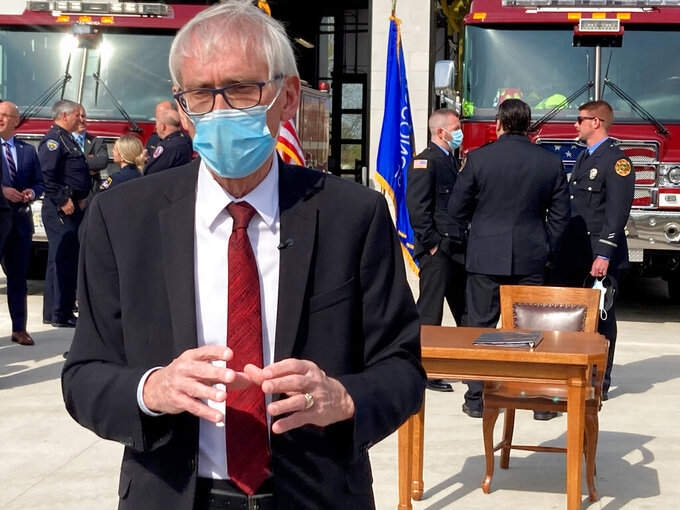 FILE - In this April 27, 2021, file photo, Wisconsin Gov. Tony Evers speaks with media at a news conference in Madison, Wis. Wisconsin's state budget is projected to see "unprecedented" revenue growth of $4.4 billion above previous estimates by the middle of 2023, news delivered Tuesday, June 8, that led to Evers calling for more spending on education and other areas while Republicans urged caution and promised tax cuts. (AP Photo/Scott Bauer File)

MADISON, Wis. (AP) — Democratic Gov. Tony Evers and Republican legislative leaders disagreed Tuesday over what to do with $4.4 billion in revenue the state is projected to receive above expectations, an unprecedented boost in tax collections attributed to an improved economy emerging from the coronavirus pandemic.

Assembly Speaker Robin Vos said he favored cutting taxes by up to $4 billion.

“My goal would be to figure out the largest possible tax cut that we could returning this record surplus back to the people who paid it, as opposed to growing the size of government,” Vos said after a closed-door meeting with Senate Majority Leader Devin LeMahieu,

Evers would have to approve any tax cut passed by the GOP-controlled Legislature. He signed one that was part of the state budget two years ago, but last year he vetoed a $250 million Republican income tax cut and he's proposed raising $1 billion in taxes on manufacturers and the wealthy.

Evers, who is up for reelection next year, renewed his call to spending more on K-12 education and invest in other priorities he laid out in his original budget proposal.

“There’s no excuse for choosing not to fully invest in our kids and our schools, broadband, venture capital and support for Main Street businesses, among other critical priorities, that will ensure we’re bouncing back and better than we were before this pandemic hit,” Evers said in a statement.

The budget as it stands spends less than 10% of what Evers proposed on K-12 schools, a level that puts $1.5 billion in federal coronavirus relief funding for schools in jeopardy.

Republicans, however, said the improved economy was due to the conservative state budgets they enacted over the past decade, not anything Evers did.

“We will take this moment to consider ways to significantly reduce the tax burden on workers and main street businesses and pay off state debt to save taxpayers long into the future,” LeMahieu said.

LeMahieu, during a virtual forum hosted by Wisconsin Health News, said the new revenue projections are all the more reason for the state to reject expanding Medicaid. Democrats have urged the move now, after years of Republican opposition, because the state would get $1 billion in federal money made available under the coronavirus relief package approved by Congress.

Vos said “all tax cuts are good” but that his priorities were cutting income and property taxes for businesses and individuals. Republican budget committee member Sen. Dale Kooyenga called for eliminating entire income tax brackets and categories to cut taxes for the middle class. Vos did not rule out that idea.

Evers also announced that he was rescinding $300 million in budget cuts across state government ordered earlier in the pandemic, including $50 million to the University of Wisconsin System and the state’s technical colleges.

The rosier budget projection delivered Tuesday is based on the strength of current tax collections and “vastly improved economic forecasts for the remainder of this year and the next two years,” Legislative Fiscal Bureau Director Bob Lang wrote to the co-chairs of the Legislature's budget committee.

The primary factors in the improved forecast since January were the $1.9 trillion federal coronavirus relief package enacted in March, which included $1,400 stimulus checks, and the decline in COVID-19 cases and rise in vaccinations, Lang told lawmakers.

“The increase in general fund tax collections in 2021, particularly in the months of April and May, is unprecedented," Lang wrote.

The estimate does not even include the $2.5 billion in federal coronavirus relief money coming to the state for infrastructure and other uses.

Many other states are seeing similar budget windfalls as coronavirus cases decrease and the economy ramps up.

Wisconsin's budget committee was expected to complete its work next week and send the two-year spending plan to the Republican-controlled Legislature for votes likely by the end of this month. The budget would then head to Evers, who has broad veto powers. It wasn't immediately clear whether news of the massive surplus would delay completion of the budget, which begins July 1 and runs through June 30, 2023.