In unusual SEC season, defense is becoming a punchline 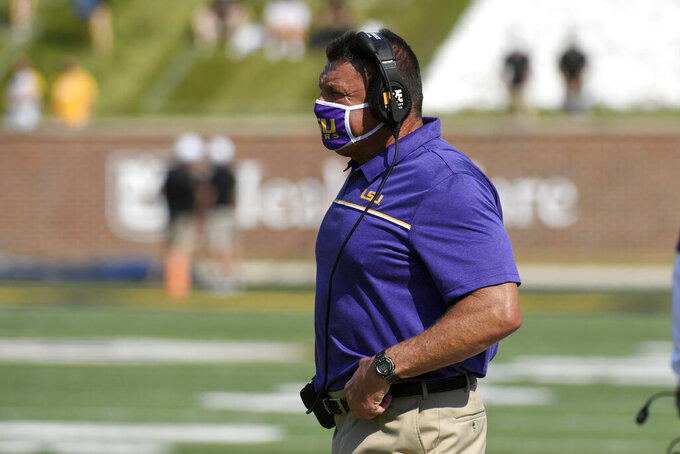 LSU head coach Ed Orgeron watches from the sidelines during the first half of an NCAA college football game against Missouri Saturday, Oct. 10, 2020, in Columbia, Mo. (AP Photo/L.G. Patterson)

And when Orgeron says, “All these explosive plays have to stop,” he might as well be speaking on behalf of a host of coaches across the Southeastern Conference.

Even Alabama’s Nick Saban, who is as accomplished a defensive coach as there is in college football, can relate.

Six SEC teams -- LSU, Vanderbilt, Florida, Texas A&M, Missouri and Mississippi – rank worse than 50th in the nation in points allowed per game, with all of them allowing an average of 32 points or more.

Alabama isn't doing much better. The Crimson Tide ranks outside the top 40, allowing more than 30 points per game after outlasting Ole Miss, 63-48, in a game that saw Alabama give up the most yards (647) in school history.

“We had missed assignments and tackling -- probably the two things that were the biggest detriment for us in the last game,” Saban said. “Those are fundamental things that you have to fix.”

Orgeron's frustration is evident in the extreme remedy he suggested this week after a 45-41 loss at Missouri, which bounced defending national champion LSU out of the AP Top 25.

“We’ve got to simplify,” Orgeron said. “I don’t care if we have to play one defense and one coverage. Play it. Play it right.

The SEC has long been renowned for fielding fast, physical defenses that rank among the nation’s best and send numerous players on to the NFL. Six defensive players from LSU and five from Alabama were drafted by NFL teams last spring.

So it’s understandably jarring for coaches like Orgeron see his team lose a game in which his offense scores more than 40 points.

A number of SEC players find it odd as well – even offensive-minded ones like Florida quarterback Kyle Trask.

“That’s something that came up across my mind watching all the games,” Trask said this week, on the heels of the Gators’ 41-38 loss to Texas A&M. “There was a lot of high-scoring games, which is not what a lot of people expect ... especially in the SEC.”

First-year Mississippi coach Lane Kiffin said he’s noticed defenses across the country struggling and wonders if lost practice time due to the coronavirus pandemic is a factor.

The Rebels currently rank last in the nation, allowing 51.7 points per game – too much even for Kiffin’s wide-open offense to keep up.

“I don’t know if that’s a product of missing spring ball and that’s more important for defense than offense,” Kiffin said. “But I’ve heard a lot of defensive coaches saying they’re struggling and just read something about how many SEC teams are in the bottom half of defensive rankings. Usually, the SEC is extremely hard to move the ball, especially to run the ball.”

Saban, too, saw something to the suggestion that the pandemic had been harder on defenses than offenses.

“It’s much easier to practice offense on air than it is defense on air, because (on defense) you’re reacting to something all the time,” Saban explained. “Maybe that contributes to it.”

Saban added that poor play on defense can sometimes feed on itself by undermining players’ confidence.

“When players press, they actually can get worse,” Saban added. “You’ve got to play relaxed and confident and that comes from very good preparation and that’s what we need to do a better job of.”

Many coaches see the proliferation of up-tempo, spread, run-pass option offenses in the SEC as a contributing factor, although perhaps not enough to justify some of the high scoring seen in the first three weeks of this season.

“The game is changing in terms of how wide open it is. There are tremendous athletes in this league and guys aren’t in the I-formation anymore, pounding away for three yards and a cloud of dust,” Florida offensive coordinator Brian Johnson said.

At the same time, Johnson emphasized that 2020 “is just an unusual year.”

“Defenses really don’t tackle very much” during regular season practices, he added. “You got dynamic guys with the ball in their hands in the open field with a lot of space. That can be dangerous.”

Whatever the case, it’s gotten bad enough that a social media channel called “SEC Shorts” produced a satirical video in which fans wearing LSU, Alabama and Florida jerseys sit at classroom desks and struggle to correctly answer a teacher’s basic questions about how to play defense.

“What in the world has happened to the SEC’s defense?” Herbstreit said. “It’s bizarre to see this conference having these kinds of results. ... I can’t even imagine what it’s like watching film for them, because it’s embarrassing.”