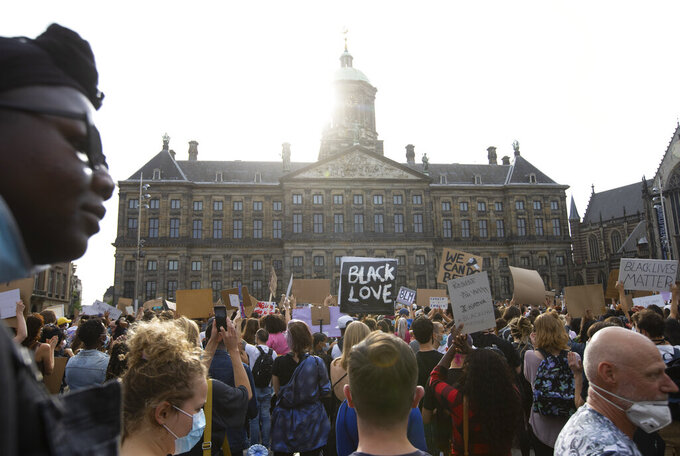 People take part in a Black Lives Matter protest in front of the Royal Palace on Dam Square in Amsterdam, Netherlands, Monday, June 1, 2020, to protest against the recent killing of George Floyd, a black man who died in police custody in Minneapolis, U.S.A., after being restrained by police officers on Memorial Day. (AP Photo/Peter Dejong)

DUBAI, United Arab Emirates (AP) — Standing at a lectern with a backdrop map of the world behind him reminiscent of one at the State Department, the spokesman of Iran's Foreign Ministry made a point Monday to criticize the U.S. in English amid ongoing protests over police killings of black people.

“To the American people, the world has ... heard your outcry over this state oppression," Abbas Mousavi told reporters in Tehran.

So too have Washington's adversaries in Iran and elsewhere.

Long the target of American criticism, these nations have used the protests over the killing of George Floyd as an opportunity to hit back at the country held up by U.S. leaders for decades as “the shining city upon a hill.”

By putting forth images of the unrest, they portray the U.S. as a hypocritical superpower unable to secure its own people, as well as normalizing the violence and repression they visit on their own citizens.

“To be clear, though they are trying to sympathize with protesters in the U.S., their aim is to leverage the internal divisions in America, ... not to advance the debate on this,” said Ariane Tabatabai, a Middle East fellow who studies Iran at the Washington-based German Marshall Fund.

“Regime officials particularly like the theme of racial tensions in the U.S. because it allows them to point the finger at Washington, which is often front and center condemning human rights abuses by the regime,” she said.

“The American regime is pursuing violence and bullying at home and abroad,” Mousavi said.

That criticism has extended to Twitter, which Iranian officials use extensively despite the website being banned since the mass protests and crackdown surrounding its disputed 2009 presidential election.

State-controlled media in China saw the protests through the prism of American views on Hong Kong’s anti-government demonstrations, which China has long said the U.S. encouraged. In a commentary, the ruling Communist Party newspaper Global Times said Chinese experts had noted that U.S. politicians might think twice before commenting again on Hong Kong, knowing “their words might backfire.”

The protests “once again reflect the racial discrimination in the U.S., the serious problems of police violent enforcement and the urgency of solving these problems,” Zhao said.

He added that China hopes the U.S. will “safeguard and guarantee the legal rights of ethnic minorities.” That's as China continues a yearslong, massive crackdown that has locked away more than 1 million ethnic minorities, most of them Muslims.

In North Korea, the country's official Rodong Sinmun newspaper reported about the demonstrations, saying that protesters “harshly condemned” a white policeman’s “lawless and brutal murder” of a black citizen.

Three large photos showed protests from recent days from Minneapolis, where Floyd died May 25 after a white police officer pressed his knee on Floyd’s neck for several minutes. The officer was fired and charged with murder, but protesters are demanding the three other officers at the scene be prosecuted.

Rodong Sinmun noted hundreds of protesters gathered in front of the White House chanting, “No justice, no peace.” It did not make any direct comments about Trump, whom North Korean leader Kim Jong Un has met three times in high-profile summits.

Russia said the United States had systemic human rights problems, criticism that followed a pattern dating to the Cold War. The 1957 integration of Little Rock Central High School by nine African American students supported by bayonet-carrying soldiers of the 101st Airborne Division saw one Soviet newspaper use the headline: "Troops Advance Against Children!”

That information warfare continues today in the cyber-realm, as U.S. intelligence agencies say Russia meddled America's 2016 presidential election. Tabatabai said she and her colleagues had been tracking Chinese, Iranian and Russian social media accounts using the hashtags #BlackLivesMatter and #GeorgeFloyd.

U.S. allies as well have been expressing their own opinions on the unrest. British Prime Minister Boris Johnson’s spokesman said the arrests and assaults on journalists were “very concerning.” Zimbabwe summoned the U.S. ambassador over U.S. national security adviser Robert O’Brien's allegation this weekend that Harare could be one of several foreign adversaries taking advantage of the demonstrations.

Meanwhile, Germany’s center-left Social Democratic Party, which is a member of Chancellor Angela Merkel’s governing coalition, on Monday described itself as “157 (years old) and Antifa. Naturally.”

The tweet appeared to be a response to Trump’s assertion that he would designate Antifa, an umbrella description for the far-left-leaning militant groups that resist neo-Nazis and white supremacists at demonstrations and other events, “a terrorist organization.”

Across from the U.S. Embassy in Paris, dozens of people knelt in silent protest, urging the French government to take racism and police violence more seriously. Despite a ban on gatherings of more than 10 people because of the coronavirus, they held signs reading “I Can’t Breathe” in English, or “Racism is suffocating us” and “We are all George Floyd” in French.

Thousands of people packed Dam Square in central Amsterdam and spilled into several side streets in an unexpectedly large protest to denounce police brutality in the U.S. and Europe. They chanted “Black lives matter!” raising their fists and holding anti-racism signs.

In Perth, Australia, the hundreds of demonstrators who peacefully protested Floyd's death also sought to highlight injustices against indigenous Australians.

“I believe it’s important as a young indigenous woman to vocalise that this isn’t just an American issue, this is a black people issue and indigenous people fit into that category,” organizer Tanesha Bennell told Nine Network television.

Protesters carried banners with messages including “No Pride in Genocide" and tears appeared as the names of indigenous people who have died in Australian police custody were read to the crowd.

Follow the AP’s latest news about the protests in the U.S. at https://apnews.com/GeorgeFloyd