US beats Germany, earns top seed in Olympics knockout round 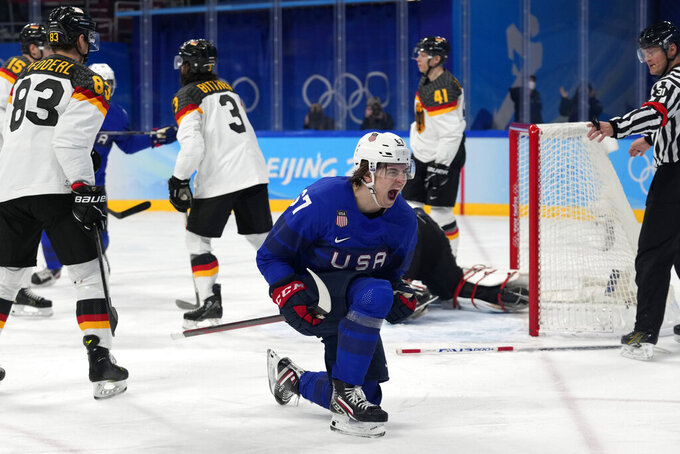 BEIJING (AP) — The team in red, white and blue now has the easiest path to gold.

The young United States men's hockey team held on to beat Germany 3-2 Sunday night, finishing the preliminary round unbeaten and clinching the top seed in the knockout round at the Olympics. The Americans move directly into the quarterfinals and next play the winner of the Germany-Slovakia game from the qualification round.

“About all we could accomplish up to this point, we’ve done it,” coach David Quinn said. “There’s a swagger to us, and there’s a believability that’s gone here over the last week and it’s put us in this position, but we haven’t really accomplished anything that we want to accomplish.”

U.S. players and coaches set a goal of winning the group. They've done that and more as the only team in the tournament to win all three of its games in regulation.

The third was tougher than expected against the reigning silver medalists, who held on to beat China two nights after the U.S. blew out the host country 8-0. Even more than the Americans' showdown against Canada, tensions boiled over between the U.S. and Germany with shouting from bench to bench and more than the usual amount of post-whistle scrums.

Much like the Canada game, the Americans stuck it out when Germany ratcheted up the physicality and nastiness and showed they won't get bullied on the ice.

“The biggest thing for us is just proving that teams aren’t going to be able to run us out of the rink physically,” captain Andy Miele said. “We’re a young team, but we’re fast, we’re skilled and no one’s going to slow us down. We’re going to keep coming at you.”

Steven Kampfer scored on the power play less than three minutes after Germany took the lead, Matt Knies put the U.S. ahead and Drew Commesso made 24 saves for his second victory in as many starts. After Tom Kuhnhackl scored for Germany with 2:29 left, Nathan Smith’s goal early in the third period turned out to be the game-winner.

It took surviving a final push by Germany in the waning seconds, but the U.S. took care of business against a less talented but hard-working opponent. Kampfer said he and his teammates might have been looking ahead to the quarterfinals, but he and his coach were proud that the focus back on Germany happened quickly.

“Couldn't be prouder of our group,” Quinn said. “I thought we had an edge to us. I thought we were hard on pucks. We’re not a big team, so teams are probably going to try to overmatch us with physicality. I thought we answered the bell tonight in a lot of ways.”

Second-seeded Finland, the third-seeded Russians and fourth-seeded Sweden also move on to the quarterfinals. Finland erased a three-goal deficit to beat Sweden 4-3 in overtime and move ahead of its archrival in the standings.

Finland's comeback pushed Canada out of the top four. The fifth-seeded Canadians will face China again in the qualification round Tuesday, a rematch of Canada's 5-0 win Sunday.

As the No. 1 seed, the U.S. can avoid the defending champion and pre-tournament favorite Russians and the impressive Finns until the gold-medal game.

"You want to put yourself in the best position possible and we did that," Miele said.

The Americans improved to 3-0-0 despite playing their second game without defenseman Jake Sanderson, who was injured in the first period against Canada on Saturday but finished that game. Sanderson also missed the opener against China because virus testing issues left him in Los Angeles while the rest of the team traveled to Beijing.

USA Hockey listed Sanderson as day to day. Quinn had no further update on his status, but the entire team will benefit from an extra day before the next game.

“We’re sitting nice,” Smith said. “We’re happy we don’t have to play the qualifying round and can get a little bit more rest.”

NOTES: Defenseman Drew Helleson returned to the lineup to take Sanderson's spot. ... St. Cloud State forward Sam Hentges made his Olympic debut, replacing Boston College's Marc McLaughlin. ... Danny aus den Birken started in net for Germany with No. 1 goalie Mathias Niederberger getting the night off — aus den Birken was the starter when Germany got to the final in Pyeongchang in 2018.