US consumer credit up 4.4% in November, best in 5 months 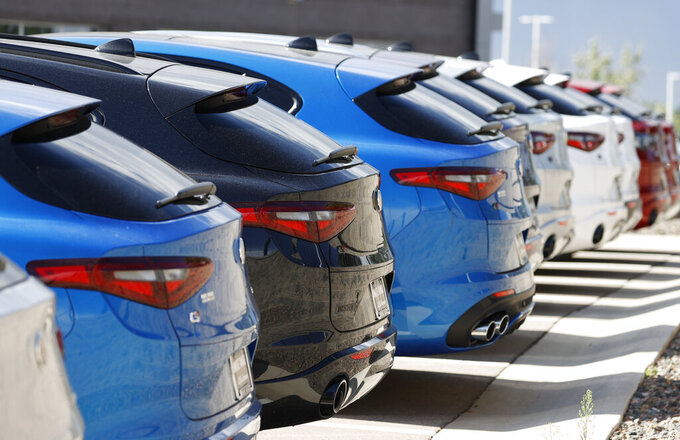 FILE - In this July 19, 2020, file photo, a long row of unsold 2020 Stelvio sports-utility vehicles sits at an Alfa Romeo dealership, in Highlands Ranch, Colo. U.S. consumer borrowing rose 4.4% in November 2020, its strongest showing in five months, led by strong gains in auto and student loans that offset a drop in credit card borrowing. The Federal Reserve said Friday, Jan. 8, 2021, that the rise represented an increase of $15.3 billion, the best showing since June. (AP Photo/David Zalubowski, File)

The Federal Reserve said Friday that the rise represented an increase of $15.3 billion, the best showing since June. Borrowing had risen $4.5 billion in October.

Borrowing for autos and student loans increased by $16.1 billion, while borrowing in the category that includes credit cards fell by $786.7 million after a larger $5.5 billion drop in October.

The drop in credit card use was an indication consumers remain cautious about spending amid a spike in coronavirus cases in recent weeks.

Consumer borrowing is closely watched for indications of the willingness of households to take on more debt to support their spending, which accounts for 70% of U.S. economic activity.

Analysts said that in coming months there are likely to be more job losses, but also further relief government support, which President-elect Joe Biden has promised to push through Congress.

“A weakening labor market will likely weigh on consumer spending and revolving credit growth in the months immediately ahead,” said Nancy Vanden Houten, senior economist at Oxford Economics. She said that, while consumer credit growth is likely to remain sluggish in the early part of this year, she expects credit growth will accelerate in the second half of the year “as a recovery supported by vaccine distribution and more fiscal support takes hold.”

The changes in borrowing left consumer credit at $4.18 trillion in November, up a modest 0.5% from a year ago.

The Fed's monthly consumer credit report does not cover home mortgages or any loans secured by real estate, such as home equity loans.