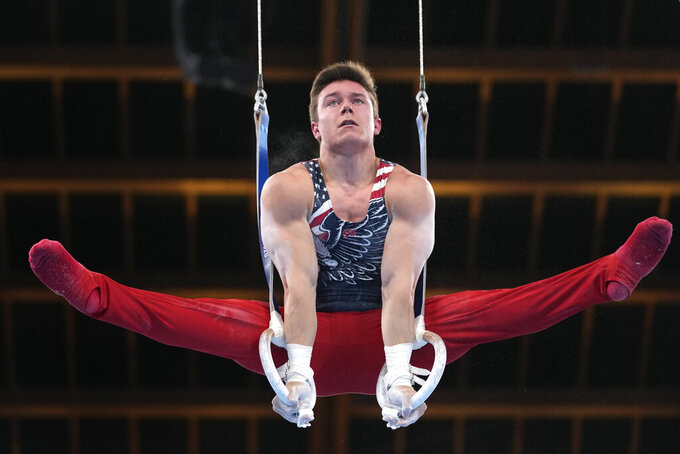 Brody Malone, of the United States, performs on the rings during the artistic gymnastic men's team final at the 2020 Summer Olympics, Monday, July 26, 2021, in Tokyo. (AP Photo/Gregory Bull)

TOKYO (AP) — Sam Mikulak walked off the floor, turned his palms up and laughed.

Looking to preserve a fourth-place finish for the U.S. during Monday night's finals, the 28-year-old's feet came out from under him. Any chance of holding off Great Britain vanished in the process.

Oh well. That's gymnastics. Nobody knows that better than Mikulak, who has spent nearly a decade as the standard-bearer for a men's program in flux. The Americans arrived at Ariake Gymnastics Center knowing they would need major mistakes by either the Chinese, the Japanese or the Russians to have a shot at the medal stand.

They didn't happen. Yet for the first time since earning bronze at the 2014 world championships, the U.S. appears to be gaining momentum. The three Olympic rookies — Shane Wiskus, Yul Moldauer and Brody Malone — were solid and occasionally spectacular while competing alongside eventual Olympic champion Russia.

No blow-ups on pommel horse. No falls on high bar. No major errors of any real kind other than Mikulak's ill-timed slip. The group that broke into an impromptu version of Journey's “Don't Stop Believin'" rarely wobbled and never wavered.

The biggest obstacle for the U.S. at the moment isn't talent, it's math. The difficulty of their routines can't quite match up with the kind put together by Russia, Japan and China. The Americans are trailing before they even step onto the competition floor, something that needs to change over the next three years if they want to close the gap on the sport's three superpowers. And they know it.

“Playing it safe is not worth it in the long run,” Wiskus said. “I’ve been guilty of this many times, and taking skills out just for a clean hit routine. But when it comes to advancing USA gymnastics and getting us on the medal podium, it’s not going to help us. We really need to think about our priorities and focus on energy on getting our difficulties up and making that the priority.”

There's time. Malone is 21. Wiskus is 22. Moldauer is 24. They hardly looked overwhelmed by the sport's biggest stage. Starting on pommel horse — long a place where U.S. medal hopes have gone to die — they cranked out hit set after hit set. It wasn't enough to track down the top three, but the Americans did spend most of the night bumping their head up against the ceiling.

“I think now that we’re going to be able to come back, take our experiences from these Games and carry them to the next one,” Wiskus said. “I think that it’s only going to make us stronger and make us more prepared for the next time around.”

There won't be a next time, however, for Mikulak. The six-time national champion is ready to get on with the rest of his life. He's engaged to be married and in the process of moving to North Carolina.

He has two days of competition left in his life. He'll join Malone in the all-around on Wednesday and chalk up in the parallel bars in the event finals later in the games. Then it's time to move on. He's OK with it. Malone's victories at both nationals and Olympic trials signaled a changing of the guard.

Mikulak has long made peace with it. If anything, it helped take a bit of the pressure off. For the first time in three Olympics, he actually enjoyed it. There are worse ways to wind down a career. Way worse.

“Coming out here, being able to be free and feel like myself, to be able to be vulnerable with these guys, I feel like I’m in such a better headspace,” Mikulak said. “These guys have helped me get there.”