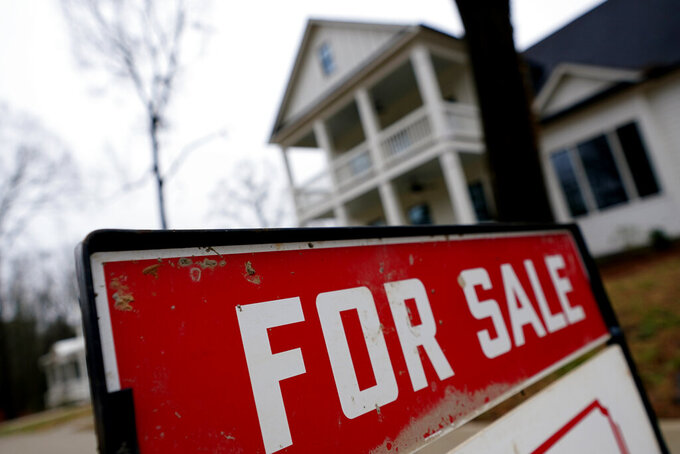 FILE - In this Thursday, Feb. 18, 2021 file photo, a new home is for sale in Madison, Ga. Mortgage rates rose above the 3% mark this week for the first time in 10 weeks, as the economic recovery from the pandemic recession continues while inflation remains elevated. Mortgage buyer Freddie Mac reported Friday, June 25 that the average for the key 30-year home loan rose to 3.02% from 2.93% last week. By contrast, the rate stood at 3.13% a year ago.(AP Photo/John Bazemore, File)

WASHINGTON (AP) — Mortgage rates rose above the 3% mark this week for the first time in 10 weeks, as the economic recovery from the pandemic recession continues while inflation remains elevated.

The rate for a 15-year loan, a popular option among homeowners refinancing their mortgages, jumped to 2.34% from 2.24% last week.

Freddie Mac economists expect mortgage rates to gradually rise in the second half of the year.

A government report Friday showed that consumer spending was flat in May but inflation posted a sizable gain, with prices excluding food and energy jumping by the largest amount in nearly three decades.

The Federal Reserve signaled last week that it may act sooner than previously planned to start dialing back the low-interest rate policies that have helped spark a swift rebound from the recession but also have coincided with rising inflation. Fed Chairman Jay Powell said the inflation spikes of recent months will likely prove temporary.

In other economic news, the government reported Thursday that the number of Americans seeking unemployment benefits last week fell by 7,000, to 411,000, a sign that layoffs declined and the job market is improving. The number of weekly applications for jobless aid has fallen steadily this year from about 900,000 in January.