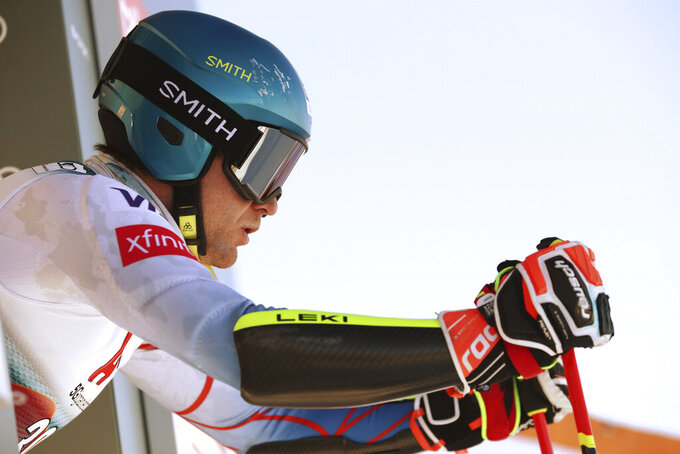 SÖLDEN, Austria (AP) — After recovering from a fractured neck, Ryan Cochran-Siegle finally made his return to World Cup skiing after 275 days though his appearance was cut short to a single run on Sunday.

The American missed qualification for the second leg of the season-opening giant slalom by one hundredth of a second.

Getting beaten by the smallest possible margin usually means heartbreak for any skier, but Cochran-Siegle was quick to take the positives from the setback.

At least he was back racing again - in a season that includes the Beijing Olympics in February.

“I thought I was skiing well, I was just holding on too much,” said the 29-year-old Vermont native, son of 1972 Olympic slalom champion Barbara Cochran.

“The conditions, and also the strength of every other skier here is really competitive, and I just needed to bring more on this run.”

Cochran-Siegle was enjoying his breakthrough season last year, including his first World Cup win in a super-G in Italy in late December, until a horrifying crash on one of the world’s most dangerous downhill courses changed everything.

He lost balance when he leaned back while landing a jump on the Streif in Kitzbühel, slid off course and cut his way through the first row of safety nets. He had to be transported off the hill by helicopter.

A few days later, Cochran-Siegle traveled back to the United States wearing a neck brace, still hopeful he might be back racing that season.

However, the fracture of the seventh cervical vertebra of the spine would not heal on its own.

“I had the C6 and C7 fused in the beginning of February. The surgery went really well, and then it was like resting, doing not a whole lot for two months,” Cochran-Siegle said.

Once the fusion was solid, he returned to skiing in May.

“Then I had a full training block this summer in (Swiss resorts) Zermatt and Saas-Fee, that was awesome,” he said.

With the speed disciplines of downhill and super-G his strongest events, a comeback on one of the toughest giant slalom hills of the circuit was always going to pose a challenge.

“Where I am at is OK. There is definitely work to do and I acknowledge that. Today is good check-in but it’s not where I want to be,” Cochran-Siegle said.

The injury forced him out of the season highlight: the world championships in Cortina d’Ampezzo, Italy, last February.

It makes him even more eager to get to the Beijing Olympics in just over three months’ time.

“Setbacks are good motivators, trying to come back stronger than you were before,” Cochran-Siegle said. “Knowing that I was skiing at that ability and trusting that I get back there, that is where my focus is. I want to get back to that kind of limitless skiing and having fun with it, too.”

While the neck injury does not physically hamper him anymore, it is still in the back of his mind.

“The only holding back is more just like mental, it’s not about injury, it’s about wanting to perform well,” Cochran-Siegle said. “I have to address that in order to overcome that, trusting the healing. I am healthy and I know that.”