US, SKorea to begin scaled-down drills amid virus spike 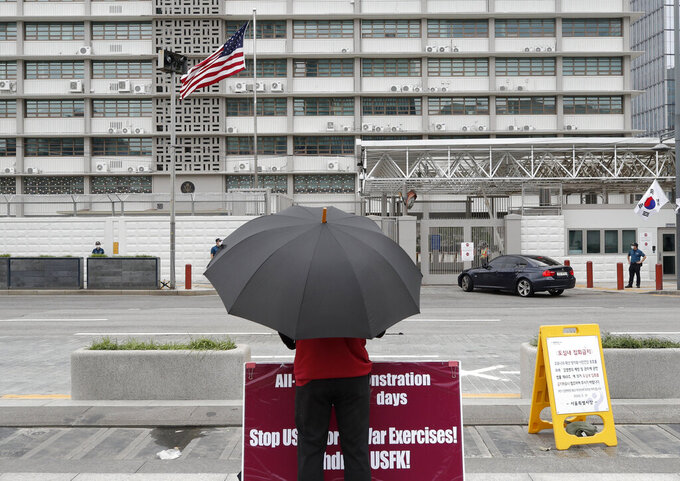 A man stands with a banner to oppose the joint military exercises between South Korea and the United States near the US Embassy in Seoul, South Korea, Sunday, Aug. 16, 2020. The countries will begin their annual joint military exercises this week, Seoul’s Joint Chiefs of Staff said Sunday. But a spreading coronavirus outbreak has apparently forced the allies to scale back an already low-key training program mainly involving computer-simulated war scenarios. (AP Photo/Lee Jin-man)

The drills from Tuesday to Aug. 28 could still irk North Korea, which portrays the allies’ training as invasion rehearsals and has threatened to abandon stalled nuclear talks if Washington persists with what it perceives as “hostile policies” toward Pyongyang.

The exercises also come at a delicate time after President Donald Trump openly complained about the costs of maintaining 28,500 U.S. troops stationed in South Korea to protect against North Korean threats. The allies have so far failed to sign a new cost-sharing agreement after the last one expired at the end of 2019.

The drills involve so-called combined command post training, which is focused on computerized simulations aimed at preparing the two militaries for various battle scenarios, such as a surprise North Korean attack.

The Joint Chiefs of Staff did not specify how many troops will participate. But it’s clear the size would be smaller than the summer drills of previous years, which often involved tens of thousands of troops on both sides, and combined computer simulations with field training. This time, the coronavirus pandemic has limited the number of U.S. troops who could be brought in from abroad.

The U.S. and South Korean militaries had canceled their springtime drills following a COVID-19 outbreak in the southern city of Daegu and nearby towns that was stabilized by April.

But South Korea is now dealing with a virus resurgence in the densely populated Seoul metropolitan region, home to half of the country’s 51 million people. It forced U.S. Forces Korea to designate the capital and surrounding areas off-limits to personnel who don’t live there. The 279 new cases South Korea reported on Sunday are the highest daily jump since early March.

There have been around 150 COVID-19 infections among U.S. troops stationed in South Korea since February, which prompted Gyeonggi Province near Seoul last month to openly call for the cancellation of the August drills. Gyeonggi includes the city of Pyeongtaek, the site of U.S. military headquarters.

The allies have downsized much of their combined training activity after Trump unilaterally suspended large-scale field training with South Korea after his first summit with North Korean leader Kim Jong Un in June 2018. Trump then seemed to adopt North Korea’s traditional view of such drills, criticizing them as a “provocative” drain of money.

Nuclear negotiations between Washington and Pyongyang have faltered since the collapse of Trump’s second meeting with Kim in February last year in Vietnam, where the Americans rejected North Korea’s demand for major sanctions relief in exchange for a partial surrender of its nuclear capabilities.

The North reacted to last year’s summertime drills by ramping up its short-range missile tests and unleashing verbal vitriol toward South Korea, which had lobbied hard to revive nuclear talks between Washington and Pyongyang.