US stocks slide from records as wait continues for Congress 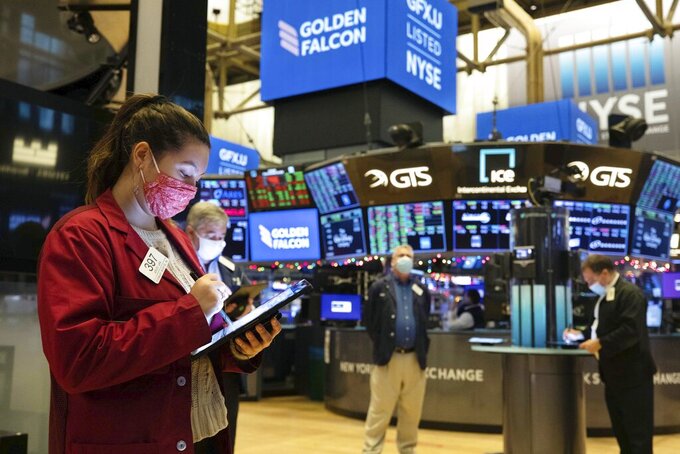 In this photo provided by the New York Stock Exchange, trader Ashley Lara, left, works on the floor during the Golden Falcon IPO, Friday, Dec. 18, 2020. U.S. stock indexes are slipping from their record levels Friday as the wait drags on to see if Congress can reach a deal to send more cash to struggling workers and businesses. (Colin Ziemer/New York Stock Exchange via AP)

Wall Street capped a solid week of gains on a down note Friday as the wait drags on to see if Congress can reach a deal to send more cash to struggling workers and businesses.

The S&P 500 fell 0.4%, a day after it and other major indexes returned to record heights. The decline snapped a three-day winning streak for the benchmark index, but it still notched a 1.3% weekly gain that more than made up its prior week's loss.

Hope that Congress may be nearing a deal to offer more financial support for the economy has helped stocks set more record highs. The S&P clocked its 31st all-time high this year on Thursday. Enthusiasm about vaccines for COVID-19, which investors hope will get the economy back on the road to normalcy next year, has also fueled traders' optimism.

Friday's selling came on a particularly busy day on Wall Street. Index funds were expected to snap up more than $80 billion worth of shares in Tesla as they moved to rebalance their holdings for the quarter ahead of the electric car maker's entry into the S&P 500, effective Monday. In addition, Friday was also quadruple witching day, Wall Street-speak for the quarterly expiration of stock options and futures contracts, which forces traders to tie up loose ends in contracts they hold, leading to particularly heavy trading volume.

“This is an unusual day because we have Tesla entering the S&P and it’s quadruple witching day," said Andrew Slimmon, portfolio manager at Morgan Stanley Investment Management.

Some 57% of the companies in the S&P 500 closed lower. Technology stocks, banks and companies that rely on consumer spending accounted for a big slice of the decline. They outweighed gains by household goods makers and materials stocks, among others.

Much of the market’s focus recently has been on Capitol Hill, where momentum has kicked back up for on-and-off-again talks for financial aid for the economy. Negotiations on nearly $1 trillion in relief had seemed to be on the brink of success, but a final agreement has yet to be sealed. The package could include benefits for laid-off workers and cash payments sent to most Americans.

Economists and investors say the need for such action is urgent, as the worsening pandemic tightens its chokehold on the economy. Reports this week showed that more workers are applying for jobless benefits and that sales for retailers slumped by more last month than economists expected.

The rising coronavirus counts and deaths are pushing governments around the world to bring back varying degrees of restrictions on businesses, and fear is keeping people and companies away from normal economic activity.

Wall Street’s hope is that Congress can approve big stimulus for the economy, which could carry it through what’s expected to be a dismal winter, before the widespread rollout of COVID-19 vaccines can help it begin to stand on its own next year.

The nation’s first coronavirus vaccine just began being administered this past week, and Vice President Mike Pence got a shot on live television Friday in hopes of assuring Americans that it’s safe. That vaccine was developed by Pfizer and BioNTech. A second vaccine from Moderna and the National Institutes of Health may also be on the brink of regulatory approval after a government advisory panel endorsed it on Thursday.

Of course, it will be months before most people will be able to get access to a vaccine, and the pandemic is likely to do even more damage in the interim.

Within the S&P 500, FedEx dropped 5.7% for one of the sharpest losses in the index, even though it reported stronger revenue and profit for its latest quarter than Wall Street expected. Analysts said some of the weakness may have been due to expectations simply building too high for the company, which has been a winner of the suddenly shop-from-home economy. FedEx also reported higher costs, including expenses for keeping workers safe from the coronavirus.

Shares of Tesla surged 6%. Roughly $4.6 trillion in investments directly mimics the index, and those funds will collectively be adding tens of billions of dollars of Tesla shares, which is set to become one of the 10 biggest stocks in the S&P 500.

In Asia, some of the sharpest swings came from Hong Kong, where the Hang Seng index fell 0.7% and shares of Semiconductor Manufacturing International Corp. lost 5.2%. The U.S. Commerce Department said Friday it will restrict exports to China's top chipmaker, alleging it has ties to the military. The company has previously said it has no ties to the Chinese government

It's the latest escalation in trade tensions between the world's two largest economies.