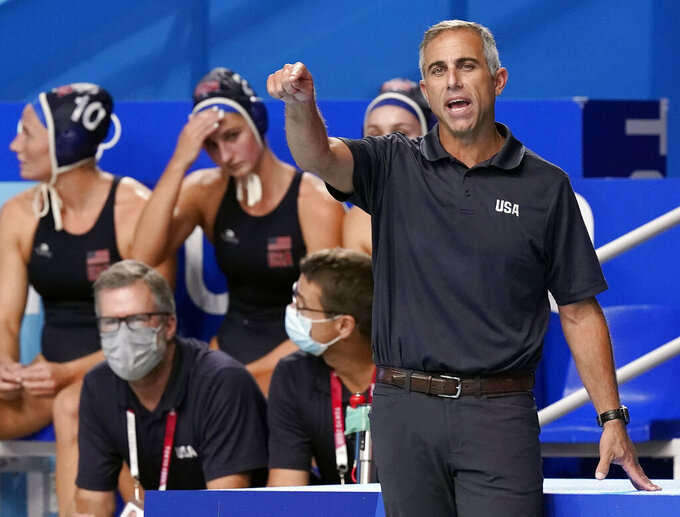 FILE - United States head coach Adam Krikorian, right, directs players during a quarterfinal round win over Canada in a women's water polo match at the 2020 Summer Olympics, Aug. 3, 2021, in Tokyo, Japan. Right after the Summer Olympics, Krikorian was done. Worn down by coaching the U.S. women's water polo team through a pandemic, he thought it might be time to try something new. (AP Photo/Mark Humphrey, File)

CHICAGO (AP) — Right after the Summer Olympics, Adam Krikorian was done. Worn down by coaching the U.S. women's water polo team through a pandemic, he thought it might be time to try something new.

Some two months after Tokyo, long after the glow of a third consecutive gold medal had worn off, Krikorian was still in the same place. Then, as he examined what went right and wrong during the previous Olympic cycle, everything began to change.

“As the months went on, I became more and more passionate about and excited about trying to make those improvements," Krikorian told the AP in a phone interview, “to make the experience better for myself and for all those around me.”

That's how he got from the exhaustion he felt after the U.S. routed Spain 14-5 in the Tokyo final on Aug. 7 to Tuesday, when USA Water Polo announced Krikorian and men's coach Dejan Udovicic are staying on through the 2024 Olympics.

The continuity at the top — far from a given after the challenges in the runup to this year's Games — is a coup for each program with Paris coming up on the horizon. While the women are going for an unprecedented fourth consecutive title, the U.S. men are looking to build on a sixth-place finish this year.

“I think there's a lot of good years ahead of the national team,” Udovicic said.

Udovicic, 51, was hired in 2013 after coaching Serbia to bronze at the London Olympics. The U.S. stumbled in Rio, going 2-3 and finishing 10th, but it showed signs of growth in Tokyo. Led by Ben Hallock and helped by a fortuitous draw, the Americans reached the quarterfinals before they were eliminated from medal contention with a 12-8 loss to Spain.

Much of the U.S. roster played for club teams in Europe for the bulk of their training for this year's Olympics, instead of spending more time together as a national team. It was a departure from past practice — one Udovicic plans to continue.

“I'm expecting that after the end of the college season 2022 we'll have almost a full roster outside the States,” Udovicic said.

Krikorian, 47, played at UCLA and coached the men's and women's teams for the Bruins before he was hired as U.S. coach in March 2009.

With Krikorian in charge, the U.S. has turned into a dominant force. After falling 10-9 to Hungary in group play in its first loss at the Olympics since the 2008 final, the U.S. ripped off four straight wins by a combined score of 63-26. It has a 174-6 record over the past five years.

No team — men or women — has ever won four straight water polo titles at the Games. But Krikorian said that wasn't a factor in his decision to return. The shortened Olympic cycle was part of his thought process, but the biggest draw at this point just might be the chance to lay the groundwork for 2028 — and, perhaps likely, the next U.S. coach.

“My focus will be certainly on Paris, but will also be on what do we have to do now to help identify and help develop the next athletes and coaches that are going to be able to perform at the Olympic Games in Los Angeles,” Krikorian said.

Krikorian also plans to spend more time at his Southern California home with his family during this cycle, an allowance granted by USA Water Polo to help keep him in place. He likely will follow a similar plan with his veteran players, giving them more time before resuming training with the national team.

While declining to speculate on who might return in 2024, Krikorian said he is anticipating “a decent amount of turnover.”

“I think the team in Paris will probably look much different, and, if I had to guess, will struggle much more during this process than the last team did,” he said. “And I look forward to that. I look forward to being possibly on the other end of things and trying to redevelop this team and this program.”