US weighs policy on Venezuela as Maduro signals flexibility 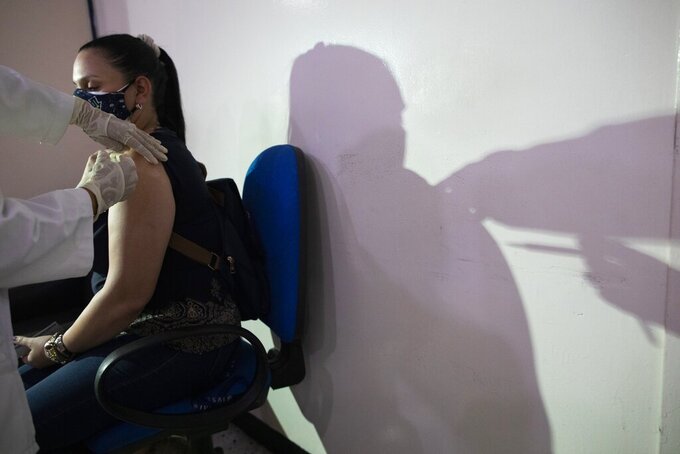 A nurse inoculates a woman with a dose of the Sputnik V COVID-19 vaccine at the Perez Carreno public hospital in Caracas, Venezuela, Friday, April 9, 2021. (AP Photo/Ariana Cubillos)

MIAMI (AP) — Venezuelan President Nicolas Maduro’s government is intensifying efforts to court the Biden administration as the new U.S. president weighs whether to risk a political backlash in Florida and ease up on sanctions seeking to isolate the socialist leader.

In the past two weeks, Maduro conceded to longstanding U.S. demands that the World Food Program be allowed to establish a foothold in the country at a time of growing hunger. His allies also vowed to work with the U.S.-backed opposition to vaccinate Venezuelans against the coronavirus and have met with diplomats from Norway trying to revive negotiations to end the country’s never-ceasing political strife.

The frenzy of activity comes as senior U.S. officials are reviewing policy toward Venezuela. An interagency meeting, which was originally scheduled to take place Monday and include Deputy Secretary of State Wendy Sherman but was postponed at the last minute, will focus on whether the U.S. should take steps to support an uncertain attempt at dialogue between Maduro and his opponents, said two people who insisted on anonymity to discuss classified diplomatic matters.

“All these recent movement points to Maduro trying to get Washington’s attention,” said Geoffrey Ramsey, a Venezuela watcher at the Washington Office on Latin America. “The question is whether the White House is ready to commit to a full-fledged negotiations strategy, or whether it will continue to play it safe and keep the policy on the back burner.”

Venezuelan Foreign Minister Jorge Arreaza and Jorge Rodriguez, the head of the pro-Maduro congress and a key promoter of dialogue, wouldn't comment when asked about the recent moves by Maduro.

Ramsey said even more goodwill gestures could be on the horizon.

Tuesday is the deadline for a committee in the Maduro-controlled congress to present a list of candidates for the National Electoral Council. Behind the scenes, moderates aligned with former presidential candidate Henrique Capriles have been meeting with Maduro representatives to push for the inclusion of two opposition rectors on the five-member board. If the demand is met, it could pave the way for Maduro’s opponents to participate in mayoral and gubernatorial elections later this year.

Also in the mix is future of several American citizens jailed in Venezuela. In recent months, former New Mexico Gov. Bill Richardson has pressed Maduro and senior aides to release six former executives at Houston-based CITGO who U.S. officials believe are unjustly imprisoned as well as two former Green Berets who participated in a failed raid last year staged from neighboring Colombia and a former U.S. Marine being held on unrelated allegations.

So far, the posturing by Maduro has failed to impress officials in Washington.

Secretary of State Antony Blinken has described Maduro as a “brutal dictator” and vowed to continue recognizing opposition leader Juan Guaidó as Venezuela’s rightful leader — a position shared by more than 50 nations.

Other than promising to work more with U.S. allies and support the delivery of more humanitarian aid to Venezuela, the Biden administration has done little to unwind Trump’s “maximum pressure” campaign to unseat Maduro.

The politics of engaging with Maduro are treacherous. Past attempts at dialogue have failed to produce a breakthrough and ended up strengthening Maduro, whose grip on power relies on support from the military as well as allies Iran, China and Russia — all of whom have seen their influence expand since Guaidó, with U.S. support, tried to ignite protests by declaring himself president in 2019 after Maduro was re-elected in a vote boycotted by the opposition when several of its leaders were barred from running.

That hasn’t stopped others from trying to bring the two sides together, however. This week, the Vatican’s secretary of state, Cardinal Pietro Parolin, is traveling to Venezuela in what many observers see as an effort by the Holy See to test the waters for another attempt at negotiations like the ones it mediated with former Spanish President Jose Luiz Rodriguez Zapatero in 2016.

While the trip’s stated purpose is to attend the April 30 beatification of Jose Gregorio Hernandez, known as the “doctor of the poor” for his caring of the sick in the 1800s, Parolin is the Vatican’s former ambassador to Venezuela and his highly unusual trip suggests more than just saint-making is on the agenda.

But both supporters and opponents of more active U.S. engagement agree that the biggest obstacle is Florida. Trump comfortably carried the battleground state in part due to hardline policies preferred by immigrant voters fleeing Cuba, Venezuela and other authoritarian governments. With Democrats holding a slim six-seat majority in the House of Representatives, betting on Maduro to follow through on his word could end up hurting their chances in midterm elections.

“As of today, there is simply no reason to believe the Maduro regime is acting in good faith,” said Elliott Abrams, who served as Trump’s special envoy to Venezuela and Iran. He cited Maduro’s failure to honor an agreement last year brokered by the World Health Organization’s regional arm to combat the coronavirus pandemic as just one example.

“Every engagement by Biden with the Maduro regime undermines the democratic opposition,” said Abrams, now a senior fellow at the Council of Foreign Relations. “If the US is going to engage at any point, it should only be done in the context of serious negotiations between the regime and the opposition, to help those negotiations succeed.”

The planned U.S. policy meeting is unlikely to produce any immediate shift and follows at least one previous high-level meeting by senior Biden officials at several agencies — the Treasury, Justice, Commerce and State Departments as well as the White House — to discuss Venezuela.

However, it could provide a roadmap for future U.S. actions should momentum toward negotiations build, the two people said, including the lifting of a Trump-era ban on diesel fuel swaps that even some of Maduro’s opponents say is worsening hunger by making it harder to move food supplies to market in diesel-powered trucks.

The U.S. must also decide by June whether to allow Chevron to resume limited drilling and oil shipments — a potential lifeline to Maduro, who is desperate for every dollar as oil production under his watch has fallen to its lowest level since the 1930s despite abundant crude reserves. As part of a waiver from sanctions granted last year, the U.S. oil giant and its American partners were ordered to cease all operations except those strictly necessary to maintain its assets in the country.

The State Department wouldn’t comment on Monday’s meeting or the status of the review of U.S. policy. However, a spokesperson for the Bureau of Western Hemisphere said the U.S. welcomes efforts to relieve the suffering of the Venezuelan people and bring the country’s humanitarian crisis to an end through effective international cooperation.

To be sure, not all of the signals coming from Caracas are encouraging.

That triggered a bitter exchange which ended with Arreaza vowing to present as evidence of blackmail to the International Criminal Court a tweet by a senior State Department official conditioning sanctions relief on the release of political prisoners and the organizing of free and fair elections.

“If Washington’s responses remain exclusively public — via Twitter or television ؅— without a counterpart in a private diplomatic channel, progress or any sort of thaw or transition will be painful and full of mistrust,” said Phil Gunson, a Caracas-based analyst for the Brussels-based International Crisis Group.

While Gunson said Maduro’s limited willingness to engage in partial agreements should be reciprocated wherever possible to encourage further opening, overcoming the inertia of the Trump years will be difficult.

“There is no quick fix in Venezuela,” said Gunson. “A solution is going to require subtlety and long-term engagement.”

Associated Press writers Matthew Lee in Washington and Nicole Winfield in Rome contributed to this report.