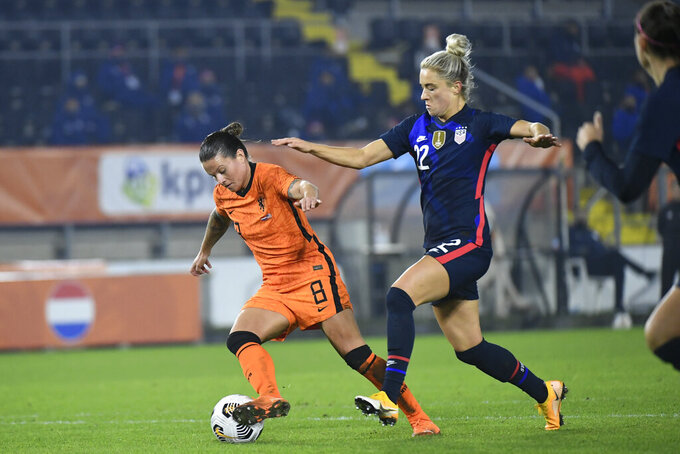 Netherlands' Sherida Spitse, left, and United States Kristie Mewis vie for the ball during the international friendly women's soccer match between The Netherlands and the US at the Rat Verlegh stadium in Breda, southern Netherlands, Friday Nov. 27, 2020. (Piroschka van de Wouw/Pool via AP)

BREDA, Netherlands (AP) — Rose Lavelle scored against the Netherlands again, Kristie Mewis scored in her first appearance for the United States in six years and the U.S. women won a rematch of last year's World Cup final by the same score, 2-0, on Friday.

The older sister of starter Sam Mewis came in as a second-half substitute and scored in the 70th minute. It was Kristie Mewis' second goal for the team, after her first in 2013. The 2,722 days between her goals was the longest stretch in team history.

“I just had to just re-watch it, actually, because I think I blacked out on what actually happened," Kristie Mewis said about her goal.

The United States hadn't played in 261 days because of the coronavirus pandemic. The top-ranked Americans have won all nine matches they've played this year. They're 11-0-0 under coach Vlatko Andonovski, who took over after Jill Ellis stepped down last year.

“A lot of things changed in 2020. But one thing that didn’t change and one thing that will never change with this team is the heart and the mind," Andonovski said. "And I was so proud of these players, the way they stepped up and handled the game, considering that some of them didn’t have a chance to train properly before this camp.”

Nine of the 11 U.S. starters for the final were in the starting lineup on Friday. Notably missing was Alex Morgan, who came in as a second-half substitute for her 170th appearance with the team.

Morgan, currently playing for Tottenham, had not played for the United States since the World Cup final because she was pregnant with and gave birth to daughter Charlie.

Netherlands coach Sarina Wiegman was not with the team because of a personal matter that was not related to COVID-19. Wiegman, a former Dutch midfielder who has coached the team since 2017, will take over as England's national team coach next September, succeeding Phil Neville.

Lavelle struck a left-footed goal on a break in the 41st minute.

Kristie Mewis subbed in to join her younger sister on the field and scored nine minutes later. Sam Mewis was among the first to embrace her sister in celebration.

“I was I was so nervous to shoot it, but I just wound up and gave it the best I could. And then turning around and just realizing what had just happened and seeing Sam and Alex running towards me was so special. It’s a very surreal moment for me," Kristie Mewis said. “It kind of hasn’t really sunk in yet.”

Mewis played well in the National Women's Soccer League's Challenge Cup and fall series with the Houston Dash, earning her a call-up to the national team.

The U.S. was without Lindsey Horan, who contracted COVID-19 and did not travel to Europe for the match.

The teams held a moment of silence before the game for Diego Maradona, the legendary Argentinian player who died earlier this week.

The U.S. team wore warmups before the game that included the message “Black Lives Matter” across the front. Nine players knelt during the national anthem.

The players issued a statement before kickoff that said, in part: “Today, we wear Black Lives Matter to affirm human decency. We protest against racial injustice and police brutality against Black people. We protest against the racist infrastructures that do not provide equal opportunity for Black and brown people to fulfill their dreams, including playing on this team.”