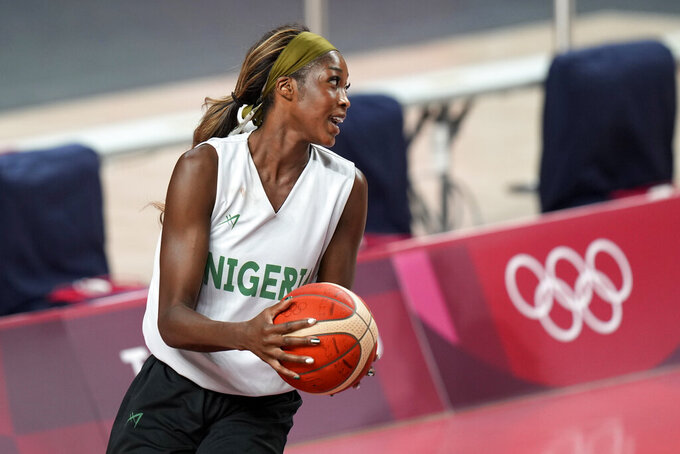 SAITAMA, Japan (AP) — It's been nearly 30 years since the U.S. women's basketball team lost a game in the Olympics, yet the Americans showed they may be a little bit vulnerable in Tokyo after dropping a pair of exhibition contests last week in Las Vegas.

Despite losses to a team of WNBA All-Stars and Australia, the U.S. is still an overwhelming favorite to win a seventh consecutive gold medal. If the Americans win the gold, it would be a fifth for Sue Bird and Diana Taurasi — the most ever in women's basketball history.

Having a week together to train in Tokyo before playing against Nigeria in the opener has helped the U.S.

The Americans haven’t dropped an Olympic contest since 1992, winning 49 consecutive games since they were beaten in the semis by the Unified Team.

Of the teams playing in Tokyo, only host Japan has beaten the U.S. in Olympic competition, topping the Americans in 1976, the debut of women’s basketball at the Montreal Games. No team has gotten within single digits of the U.S. since Russia lost in the semifinals of the 2004 Athens Games — the first Olympics that Bird and Taurasi played in.

Staley believes the there will be more competitive games in Japan.

After the U.S., the competition to reach the medal stand is wide open. Australia, Belgium, France, Canada, Serbia, Spain and host Japan all have a chance at standing on the podium.

“Everyone’s getting better and taking this thing a lot more serious than they have in a long, long time. not to say we aren’t taking it seriously,” Staley said of women's basketball. “It’s getting better. People are investing in women.”

Serbia won a bronze in the 2016 Olympics and returns most of the same players from that team.

“We are much more mature than in Rio, and I feel like that is a thing we can probably use to our advantage because you know most of this generation is toward the end,” Serbian team captain Sonja Vasić said. “It will be tough because I think this is probably one of the best tournaments ever, like maybe one or two teams that they’re not pretenders for the medal.”

Games begin Monday with the bronze medal game on Aug. 7 and the gold medal contest the next day to close out the Olympics.

Some other things to watch for at the Olympics in women's basketball:

A record 29 WNBA players will be competing in Tokyo's 5-on-5 basketball as well as 22 former players. Nearly half of Australia's roster is currently in the WNBA. That tops the previous mark of 26 set in Rio five years ago.

Taurasi missed the U.S. exhibition games in Las Vegas while recovering from a hip injury. She thinks she'll be ready for the opener after practicing the last few days.

“Yeah I’m hopeful. Yeah I feel good about it,” she said. “I want to come back as fast as possible. That’s the problem. It’s a balancing act of making sure you’re fit enough to play where you’re going to help the team and not put yourself at risk and the team at risk. I’ve been working diligently with our strength and conditioning coach Susan Borchardt and Ed Ryan, our longtime (physical therapist), so we’re making progress.”

Nigeria will try and end a winless streak for African teams at the Olympics dating back to the 2004 Athens Games. The African nation went 1-5 in Greece and no team from that continent has won a game since.

There are hopes for that to potentially change: Nigeria went 3-4 at the World Champions in 2018, falling to the U.S. in the quarterfinals.

“We aren't just looking to win one game, but we want to get a medal,” Nigeria coach Otis Hughley Jr. said.