US women seek to complete quest for 1st volleyball gold 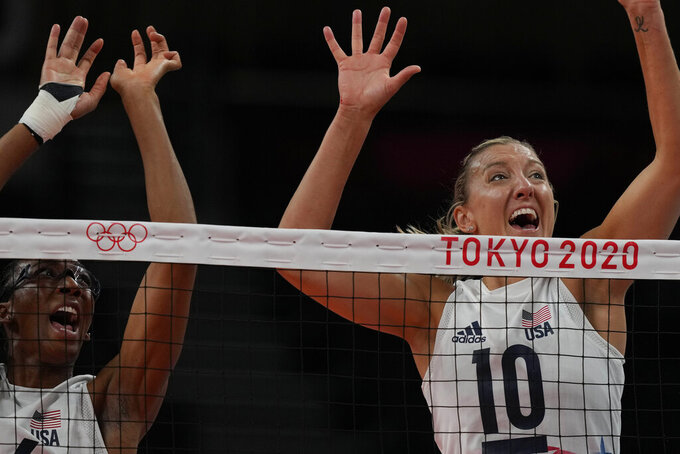 TOKYO (AP) — When Jordan Larson and Foluke Akinradewo Gunderson made the commitment to compete in a third Olympics, this moment was what they had in mind.

Two of the best U.S. women's volleyball players of their generation will wrap up their Olympic careers with a shot at the first gold medal for the Americans ever in the sport.

After winning two silver medals and one bronze in the past three Olympics the Americans will take on Brazil on Sunday in the gold medal match. The U.S. lost in the finals to Brazil in both 2008 and '12.

“We’re not done yet,” Akinradewo Gunderson said after a semifinal win over Serbia. “We’re excited that we have an opportunity to get our gold medal. It just shows that when you put your everything into it, when you care about one another, when you put others before you, good things can happen."

There has been plenty of work put in since that gutting loss to Serbia in the 2016 semifinals, with players like Akinradewo Gunderson and Larson playing year-round for clubs abroad and the national team with barely any breaks.

Akinradewo Gunderson took time away from the court after giving birth to her first child in November 2019. Then she began the grueling process of getting back to form after contracting a severe case of diastasis recti during her pregnancy, which left a 9-centimeter separation of her “six-pack” muscles in her stomach that was big enough for a fist to fit through.

The yearlong delay due to the coronavirus pandemic gave her more time to get into shape, and now she is playing her best volleyball of the tournament headed into the final.

“There were definitely tough times in my return,” she said. “I was working out in my garage breastfeeding and all that stuff. It was a journey to get back. But I was determined to do it. Part of my desire to do it was I just wanted other moms to know that it’s possible.”

Larson played professionally in Turkey and China since the 2016 Games in Rio de Janeiro and got almost no break until the pandemic hit. Then, she mostly just lifted weights and rode her Peloton bike.

She went two months without even jumping, which she said now benefits her 34-year-old body, and didn't touch a ball for about three months.

As captain, she played a big role in the decision to hire a new performance coach, former UCLA softball coach Sue Enquist, whose led monthly players-only Zoom calls that she credits for getting the players to focus on the team more than the individual.

Now she has one more chance to put her imprint on the program.

“I dealt with a lot of those emotions before coming here. How do I want to leave my legacy and what do I want to leave behind?” Larson said. “I’ve already done a lot. I’ve been able to play at the highest level for a really long time, and I’ve done it to the best of my ability. At the end of the day, that’s all I hope for, is that I can sleep well at night knowing that I did everything that I could. I think that’s what our next match is going to be.”

The journey to this stage has been a long one for a U.S. women's team that started more than 40 years ago when the 1980 Olympic squad made the decision to begin year-round training, only to get denied the opportunity to compete because of a U.S.-led boycott of the Games in Moscow.

But the foundation had been put in place, and the Americans are now assured of their sixth medal in the past 10 Olympics, tied with China for the most in that span. They have won three silver and two bronze. All that is missing is gold.

“Someone once said there’s so much pressure because the U.S. has never won, but there’s no pressure,” Larson said. “We’ve never done it. So why not go out swinging? I think we’re going to go out and try and do what we can, swing as hard as we can, go after it and just go and take it.”