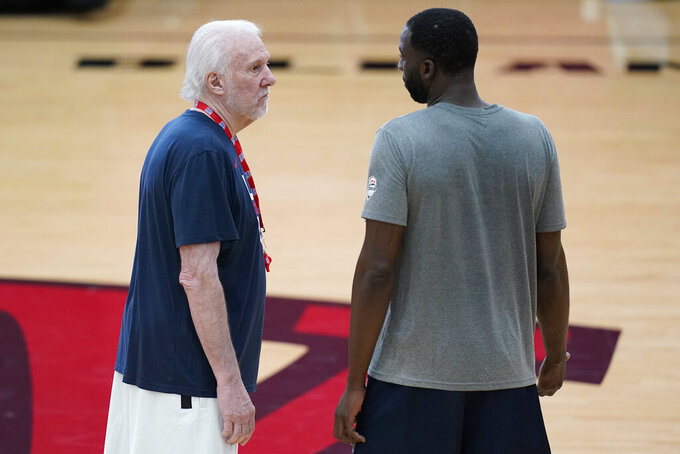 LAS VEGAS (AP) — The USA Select Team will be without three players for the remainder of Olympic training camp for coronavirus-related reasons, though there are no indications that any cause for concern exists past those players.

The U.S. Olympic team practiced for a third consecutive day Thursday, with the remaining members of the select team taking part in that workout. Players on both the Olympic team and the select team -- a group of 17 players that were brought in to scrimmage and practice against the Tokyo-bound club -- are tested daily.

“I think we all know (the pandemic) is not over yet,” U.S. coach Gregg Popovich said. “That goes without saying. Everybody has to still be vigilant and careful.”

A person with knowledge of the situation said the three players involved for the virus-related reasons were Immanuel Quickley of the New York Knicks and Charlotte Hornets teammates P.J. Washington and Miles Bridges. The person, who spoke to The Associated Press on condition of anonymity because neither USA Basketball nor the players revealed names publicly, said one of the three had tested positive for COVID-19 and the two others were being held out over possible exposure concerns. The person did not reveal which player tested positive.

“It’s confined to that,” Popovich said, referring to the three select players that he did not identify in his comments.

The news came on the same day that Olympic organizers and Japanese government officials revealed that, because of a state of emergency in response to rising virus numbers, they decided to ban fans from Tokyo-area stadiums and arenas for the games that begin in two weeks.

Fans from abroad were banned months ago, and now, so are Japanese fans from almost all Olympic events. A small number will be at some; basketball is not one of those sports.

U.S. Olympic forward Draymond Green, who was on the team that won gold at the Rio Games in 2016 as well, said the Americans may reap a small benefit from playing in an empty arena in Tokyo.

“If anything, it may help us because everybody’s normally pulling to see us lose,” Green said. “You get a lot of these countries that really feed off their crowd, and you’ll have other countries coming to support those countries, to beat us. So if anything, it may help us. It’s unfortunate, obviously, what’s happening in Japan. The cases are rising. You hate to see it happen. But just from a pure basketball standpoint, I don’t think gives us a disadvantage.”

Tokyo reported 920 new cases on Wednesday, the highest total there since May 13. The new-case number dipped slightly Thursday, to 896.