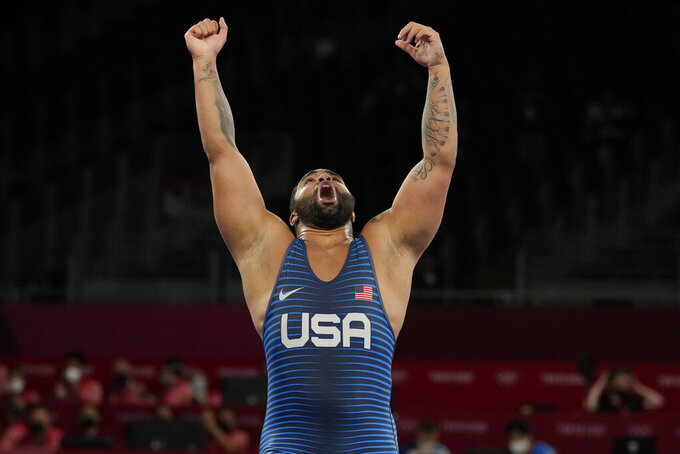 However, United States wrestling still made a statement at these Games.

Despite that, the United States finished with nine medals — more than any other nation and the most it has won since the 1984 Games that several nations, led by the Soviet Union, boycotted.

Three Americans won gold — Gable Steveson and David Taylor with dramatic last-second victories for the men and Tamyra Mensah-Stock for the women.

“Guys are getting better and better,” Snyder said. “Everybody is doing the right stuff. We have great coaches, support staff and training environments. I’m really happy for all my teammates who did a great job here, and all the coaches because they work so hard. I think we’re going to dominate and keep getting better.”

American Sarah Hildebrandt earned bronze on Saturday, the fourth medal for the U.S. women at these Games. In addition to Mensah-Stock's gold, Adeline Gray took silver and Helen Maroulis followed up her gold from 2016 with a bronze.

“Team USA — what a special time to be a part of it,” Hildebrandt said. “We are just growing up, we’re supporting each other. You can just feel the energy intermixed between (men’s and women’s) teams.

“It’s just really cool to be a part of, and I’m so grateful to have these teammates. I really feel like we are out there supporting each other and working to get better. And I think that’s something that’s been different than before. And you can see it starting to pay off.”

Sadulaev led Snyder 6-0 in the final minute. Snyder scored two on a takedown and one on a step-out to make it 6-3 before Sadulaev held on.

Azerbaijan’s Mariya Stadnik won her fourth Olympic medal. She won her match for bronze at 50kg by technical superiority, 10-0 over Mongolia’s Namuuntsetseg Tsogt Ochir. She previously had won two silvers and a bronze.

The United States' Hildebrand defeated Ukraine’s Oksana Livach by technical superiority, 12-1, for the other bronze.

Otoguro’s best result had been a world title in 2018. Aliyev was a 2016 Olympic bronze medalist at 57kg and a three-time world champion.