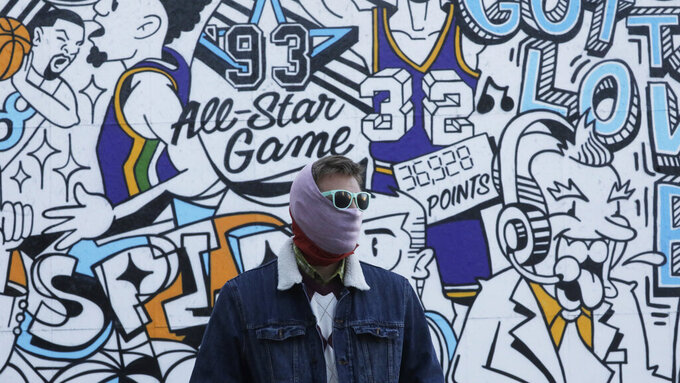 FILE - Andy Paulsen wears his mask during a walk in downtown in Salt Lake City Thursday, April 9, 2020. Utah has set new goals for fighting the coronavirus pandemic that include keeping the state's fatality rate below 1% and maintaining an unemployment rate below 4.5%, state leaders said. Gov. Gary Herbert and other state leaders rolled out their new plan, which prioritizes both public health and boosting the state's economy through the fall and winter. (AP Photo/Rick Bowmer, File)

SALT LAKE CITY (AP) — Utah Gov. Gary Herbert announced Thursday that he is considering a statewide mask mandate and is planning expanded coronavirus testing in response to what he called an alarming spike of infections in the state.

Over the past two weeks, Utah's rolling average number of daily new coronavirus cases has increased by about 54%, according to state data. The rolling 7-day average for positive tests is 661 per day, up from 381 per day last week.

“We are taking this spike and the magnitude of it very seriously,” Herbert told reporters.

Herbert, a Republican, has urged residents to wear masks for months but has stopped short of ever implementing a statewide mask mandate. He has instead allowed counties to decide if they needed bans.

He said the expanded coronavirus testing would be given to anyone who wants it, not just to those who have symptoms.

The new virus case surge was likely driven by high school and colleges resuming in-person learning and could lead to an increase in hospitalizations for older people over the next few weeks, said Dr. Eddie Stenehjem, an infectious diseases specialist at the Intermountain Healthcare hospital network based in Salt Lake City.

“If we don’t do something we can’t expect a different result,” Stenehjem said. “We can’t just hope that this gets better.”

Hospitalizations in the state have been declining since July and recently flattened out. But Stenehjem said he’s worried about young adults spreading the virus to their parents and grandparents.

Two Utah high schools that surpassed 15 cases of people who were infected among students and staff recently decided to ignore state guidelines recommending that schools that reach that number of cases close and switch to virtual learning for two weeks.

Many of the new cases are being driven by college-age students in Utah County, home to Brigham Young University and Utah Valley University, state health officials said.

Forty percent of this week's new virus cases were reported in Utah County, which accounts for 20 percent of the state's population, said Dr. Angela Dunn, the state epidemiologist.

The county has not put in place a face covering mandate outside of the city of Provo.

There have been 60,000 reported virus cases in Utah and and 437 people have died, according to state data.