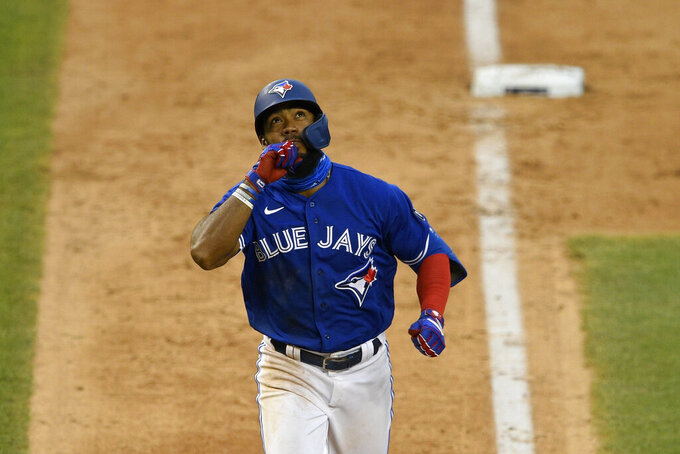 Toronto Blue Jays' Teoscar Hernandez reacts as he heads home on his home run during the eighth inning of a baseball game against the Washington Nationals, Thursday, July 30, 2020, in Washington. The Nationals won 6-4.(AP Photo/Nick Wass)

Toronto general manager Ross Atkins says life has been difficult for the vagabond Blue Jays at the beginning of a baseball season like no other.

The Blue Jays haven’t had a real home game yet, and still don’t have a stadium fit to host them. They played twice as the home team at Nationals Park in Washington this week. They were supposed to do the same in Philadelphia this weekend until those games were postponed after a Phillies coach and clubhouse staffer tested positive for the coronavirus.

“It’s not easy,” Atkins said on a video conference Friday. “If you put yourself in the shoes of someone who’s trying to be the best in the world at something, they have routines that are very important.”

Once upgrades are complete, the Blue Jays will play at Sahlen Field in Buffalo, New York, usually the home park of Toronto’s Triple-A team. Workers are racing to install new lighting, improve the field, expand the clubhouses, and build outdoor batting cages, mounds, and workout areas on stadium concourses.

The Blue Jays’ first game in Buffalo is set for Aug. 11 against the Miami Marlins, who have been idled until Sunday because of an outbreak on the team.

Before choosing Buffalo as a temporary home, the Blue Jays endured a long and rocky road.

Toronto’s players gathered at the team’s spring training site in Dunedin, Florida, for intake testing prior to summer camp. A few days later, after receiving approval from the Canadian government, they flew north to train at their home stadium, isolating themselves there and at the attached hotel.

As camp wrapped up, Canadian health officials shot down the idea of regular season play at Rogers Centre, concerned about the risk posed by the Blue Jays and their opponents traveling in and out of the country after games in virus hot spots such as Florida.

Eager to find a big league stadium to call home, the Blue Jays pursued a sharing agreement with the Pittsburgh Pirates for PNC Park, but the Pennsylvania Department of Health said no. Toronto inquired about a similar deal with Baltimore but ultimately settled on Buffalo, making the announcement just hours before their season-opening game at Tampa Bay last week.

After Toronto beat the Rays last Friday, Blue Jays infielder Cavan Biggio said he and his teammates were rallying around the idea of hosting opponents in a minor league facility.

“Even if it’s in a Triple-A ballpark, we’re still going to play with a chip on our shoulder,” Biggio said.

Atkins said he hasn’t heard any complaints from Blue Jays players about their situation.

“This is very disruptive and very difficult, but they’re not talking about it,” he said. “They’re not focused on it. I think everyone realizes that this situation that we’re in, it’s much bigger than us.”

The Blue Jays and Nationals are both currently idle because of opponents’ virus issues but Atkins said there was no talk of playing each other again this weekend.

“With no games to be played left in our schedule against the Nationals it just made sense to hit pause,” he said.

Toronto’s games against the Phillies could be made up with doubleheaders when the teams meet at Citizens Bank Park in late September, Atkins said.

“I think we’ll have clarity on that soon, probably within hours or days,” he said.

Meanwhile, the Blue Jays are trying to keep their players physically and mentally occupied during their prolonged stay in Washington. They’ve set up an area at their hotel where small groups can socialize for limited periods of time and arranged a socially distanced bus tour of local landmarks for Friday night.

“That’ll be interesting and a good opportunity for our players to just get together and stay engaged,” Atkins said.

The Blue Jays will work out at Nationals Park on Saturday and play an intrasquad game there Sunday, then fly to Atlanta later that night. After an off day Monday, a three-game series against the Braves begins Tuesday.